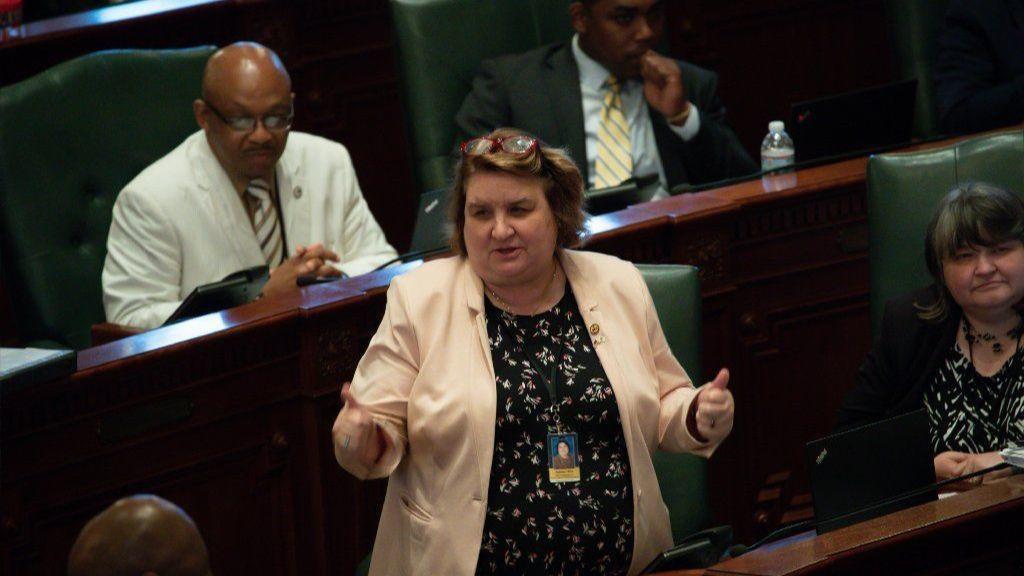 Looking to address the broken system that enabled the Aurora shooter to buy a gun and keep it — despite his criminal history — the Illinois House narrowly passed legislation Wednesday that requires residents to provide their fingerprints before obtaining a firearms permit.

The measure would also create a task force to enforce laws requiring those whose gun licenses have been revoked to surrender their firearms or place them with a legal owner.

The 62-52 vote followed about three hours of heated debate on the House floor, with strong opposition mainly from suburban and downstate Republicans.

The bill’s House endorsements comes after a Tribune investigation found that more than 34,000 Illinois residents had their Firearm Owners Identification cards rescinded during the past four years, but nearly 80% still could be armed because law-enforcement has not followed up on their revocations. State records indicate the revoked cardholders own have purchased as many as 30,000 guns from federal licensed dealers.

The loopholes were exposed in February, when a disgruntled employee opened fire at the Henry Pratt Co. warehouse in Aurora, killing five co-workers and wounding five officers before dying in a shootout with police.

As a convicted felon, Martin never should have been allowed to purchase the handgun used in the mass shooting. But he was able to do so after a background check using five distinct federal databases failed to show his 1995 felony conviction in Mississippi for choking his ex-girlfriend and beating her with a baseball bat.

With his improperly acquired FOID card, Martin was able to purchase the Smith & Wesson handgun in 2014. His criminal history caught up with him later that year when he applied for a concealed carry license and provided his fingerprints to expedite the process. His prints flagged his conviction, prompting state police to deny the license and revoke his FOID card.

If the legislation is approved by the Senate and signed by Gov. J.B. Pritzker, gun license applicants would be required to provide fingerprints in order to receive or renew their cards. The move is intended to provide a more thorough criminal background check, but detractors say it infringes on their Second Amendment rights. Opposing lawmakers warned that there could be legal challenges if the bill becomes law.

The legislation would also raises the FOID application fee to $20 for 5-year license, up from a $10 fee for a FOID card that lasts for 10 years. The bill’s proponents initially wanted to change $50, but they relented after push back from other lawmakers who said the amount would make it difficult for law-abiding residents to have guns.

About $5 from each application fee will be earmarked for a new task force aimed at following up on revocations. Under the revamped law, those who receive revocation notices still must surrender their FOID cards to their local police department within 48 hours and fill out a form stating their guns have been transferred either to police or to a legal gun owner.

In all, nearly 27,000 Illinois residents over the past four years have not informed authorities what they did with their guns after state police stripped their licenses, according to the analysis. That means law enforcement has no idea whether 78% of revoked cardholders since 2015 still possess guns.

The uncertainty has created a public safety risk that has been compounded for decades by antiquated policies and limited law-enforcement resources.

Among those with dismal compliance rates are residents convicted of domestic violence or people who had their cards rescinded because of mental health concerns, the Tribune analysis shows. About 3 out of 4 such revokees failed to tell the state where their weapons are, despite making a combined 5,000 serious inquiries about purchasing guns before the revocation.