DOWNTOWN —  Ald. Brendan Reilly’s (42nd) only opponent has dropped out of the race, assuring the longtime alderman a fifth term in City Council this year.

Chris Cleary, a former vice president at BMO Harris and recent founder of an e-commerce company, withdrew from the 42nd Ward race late last week, according to the Chicago Board of Elections.

Thomas Enright, a 42nd Ward resident, sought to boot Cleary from the race by claiming the challenger did not have enough valid signatures to appear on the ballot. Enright dropped that objection at the same time Cleary withdrew from the race, officials said.

Cleary was facing an uphill battle challenging Reilly, an incumbent with deep pockets who has not faced an opponent in any reelection bid since he joined City Council in 2007. 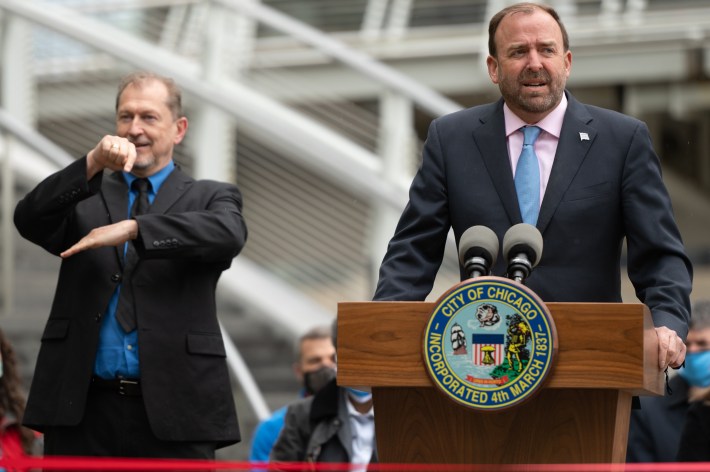 Credit: Colin Boyle/Block Club ChicagoAld. Brendan Reilly (42nd) speaks at the ribbon cutting ceremony for the long-awaited completion of the Navy Pier Fly-Over path on May 10, 2021.

Reilly reported having $778,694 in the bank at the end of the third quarter, while Cleary reported loaning himself $50,000 in November. Cleary’s campaign ended up receiving four contributions totaling $16,500, finance records show.

Cleary had previously denied a campaign contribution connection to Rossi.

Rossi and Reilly have been known to disagree on the alderman’s attempts to crack down on his clubs in River North.

In a year of City Council turnover with multiple members stepping down or running for mayor, Reilly joins five other alderpeople who are opposed in the Feb. 28 election.

Alds. David Moore (17th), Scott Waguespack (32nd) and Matt Martin (47th) also are running solo in their wards and are assured another term in office.