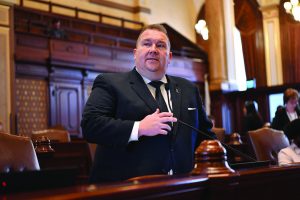 CHAMPAIGN — The farming community is mourning the death of Illinois State Sen. Scott Bennett, following a brief hospitalization at Carle Foundation Hospital. The cause of death for the senator, who was well-known to those in the state agriculture community for his tireless promotion of farm mental health, agricultural education and youth agriculture organizations, was given as complications resulting from a brain tumor. Bennett passed on Friday, Dec. 9 at the age of 45.

“Scott lived a life full of service and constantly looked for ways to lend his time and energy to helping our community and state. He worked tirelessly to find solutions to society’s most pressing issues by finding common ground and compromise. To say he will be greatly missed is an understatement,” said Bennett’s wife, Stacy, in a statement posted to Bennett’s website.

“We appreciate the amazing care he received at Carle Foundation Hospital and thank all of the doctors, nurses, and staff who provided Scott with excellent care and support for his family. We are also grateful for the outpouring of love and support. Scott’s impact on our community is very evident.”

Bennett, a Democrat, represented the 52nd Senate District in Champaign and Vermilion counties. He had previously served as Champaign County assistant state’s attorney prior to running for the state legislature.

Raised in Gibson City, Bennett was a fifth-generation farmer. He was an Illinois State University graduate who obtained his law degree from the University of Illinois at Urbana-Champaign.

Fellow U of I graduate and friend, Gov. J.B. Pritzker, also released a statement in the hours following Bennett’s untimely passing: “Today, the state of Illinois mourns the loss of a dedicated public servant and devoted father. Senator Scott Bennett was a good man who always operated with the best interest of his constituents in mind. Throughout his time in Springfield, he fiercely advocated for the institutions that shaped his life, from his upbringing on a Gibson City farm, all the way to the University of Illinois Urbana-Champaign. The entire state is a better place thanks to his service.”

Bennett was the primary sponsor of the Farm Family Resource Initiative, established to address the mental health needs of Illinois farming and agricultural communities. In 2021, Pritzker announced at the Farm Progress Show that the initiative — which began in just six counties — would be expanded into all 102 Illinois counties. He was also instrumental in securing $10 million in appropriations to sustain operations at Illinois Soil and Water Conservation District offices under Gov. Bruce Rauner in May of 2018.

In addition to his wife, Bennett is survived by the couple’s two young children.

The meeting kicked off with the IFB President Richard Guebert Jr. urging the need for bipartisanship during his annual address. His remarks came as Congress is poised to negotiate a new farm bill that could include changes to crop insurance and the safety net system.

“Being bipartisan has served Farm Bureau well. Farmers need support from both sides of the aisle,” said Guebert, adding that maintaining integrity and respect through the legislative process will foster a good working relationship between IFB and elected officials, agency representatives and regulators. “We may not always agree on issues, but we are going to be forthright in explaining our position. We listen and show respect to others, even those with opposing points of view.”

“The most debate we had through the delegate session was around renewable energy projects. I think where this organization is at with respect to renewable energy is really trying to find that balance out here around private property rights,” said Mark Gebhards, executive director of government affairs and commodities.

“Private property rights is a core policy of our policy book. How we go forward, how we try to find that balance, how we define these renewable energy projects and how they affect our landowners was really the focus of a lot of that debate,” Gebhards added.

“There is a new sense of healthy urgency when it comes to this committee and our policy work,” says ISA Director of Government Relations & Strategy, Andrew Larson. “We are working proactively to be a trusted source on Illinois-specific topics, to promote Illinois soy and the issues confronting our farmers. From encouraging new trade deals and supporting the timely passage of a bipartisan farm bill, to advocating for livestock farmers’ rights and the transition to higher blends of biodiesel in Illinois, this committee is bringing Illinois farmers to the forefront of policy-related efforts.”

Adds ISG committee chairman Brad Daugherty: “We will continue to grow our legislative reach by fostering relationships with state and federal legislators. If Illinois farmers stand to be impacted by the outcome of a conversation, we will be at the table, leading that conversation.”

Edward L. McMillan, a farmer and agribusiness professional from McDonough County, has been awarded the 2022 Illinois Farm Bureau Charles B. Shuman Distinguished Service Award. The award is the highest given by IFB and was presented during the organization’s annual meeting in Chicago, Dec. 3-6. (IFB news)