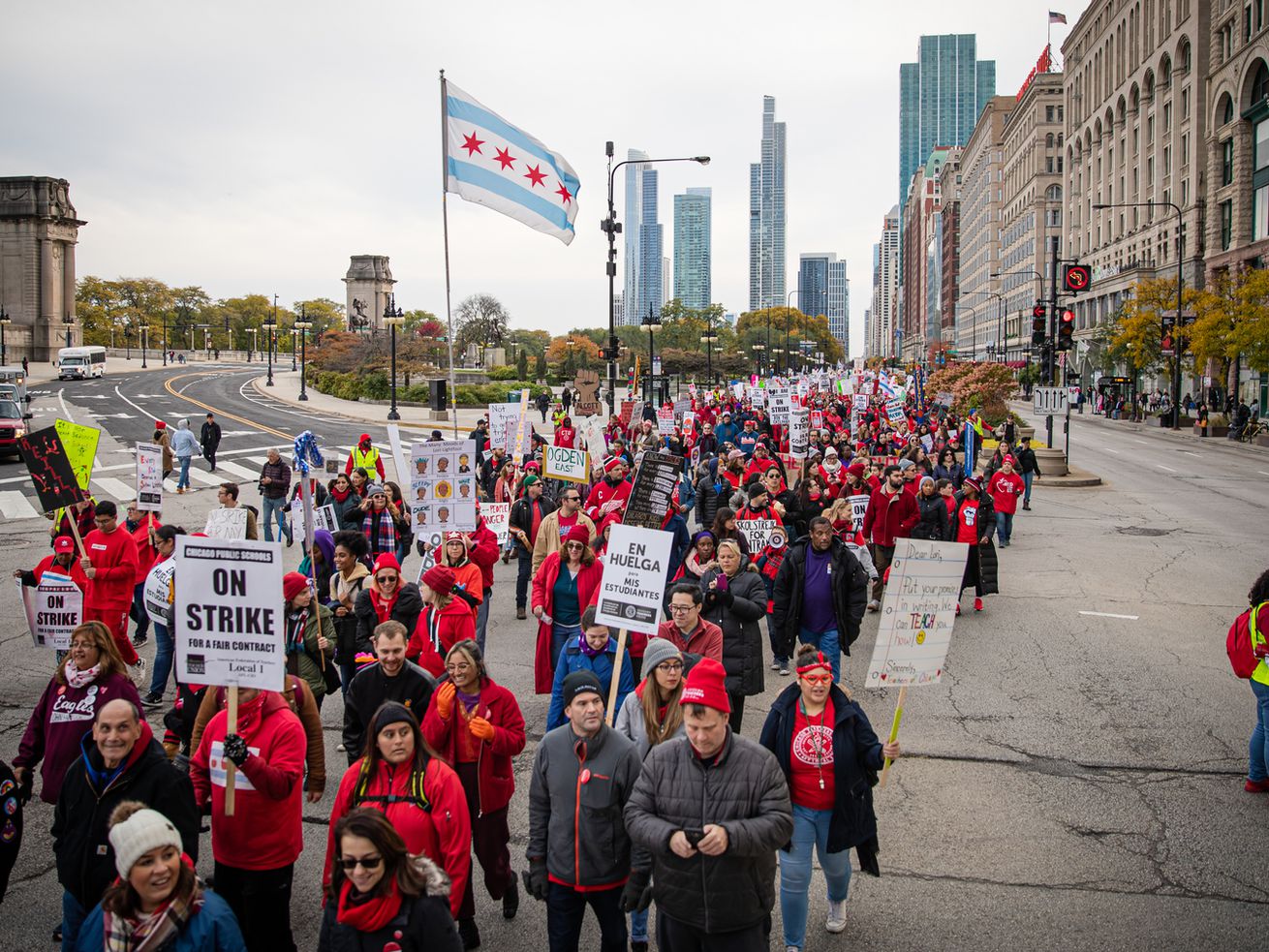 The contract changes won by the Chicago Teachers Union were hailed as major victories for public education, but bitterness between the two sides has only intensified.

Jesse Sharkey stood in a soggy West Side field last October, a couple feet to the right of U.S. Sen. Elizabeth Warren, smiling as he listened to the then-Democratic presidential candidate rally his union five days into a grueling strike.

The high-profile appearance was a needed morale boost after, a day earlier, the Chicago Teachers Union’s relationship with Mayor Lori Lightfoot had hit an all-time low. The mayor had sent a letter to union leaders urging them to end their strike and return to work, claiming “there is no more money” left to offer. That led union boss Sharkey to say his hopes were “dashed” for a quick resolution to the work stoppage.

Fast forward a year later to the day, and the union filed an unfair labor practice charge against the school system Thursday with the two sides facing new, unprecedented challenges — while holding the same disdain for one another.

A rollercoaster strike that featured personal attacks but ended with a historic contract should have seen both the union and district move toward a productive relationship. Yet with a deadly pandemic that requires more cooperation than ever, the memories of a bruising contract fight have lingered, hindering any agreement over a potential school reopening even as districts and unions across the country have resolved their differences.

So was the 11-day strike, the CTU’s longest in three decades, worth the damaged relationship? Do the contract changes, widely hailed as major victories for public education in Chicago, still stand up a year and one public health emergency later?

“The current contract they have, probably more so than previous ones, is a better platform to work from under a public health crisis,” said Bob Bruno, a labor professor at the University of Illinois who has studied CPS-CTU negotiations for years.

Those staffing additions were among the union’s loudest demands and most cherished victories. And while both the CTU and mayor said they were necessary supports, neither could have imagined a pandemic was coming that would make nurses and social workers all the more necessary.

The contract called for immediate positions dedicated to serving homeless students as well as a nurse and social worker in every school by summer 2023 — a date that now feels a long way out given the circumstances.

To kick off the yearly additions leading up to then, the district this year hired 44 social workers, 55 school nurses, 62 special education case managers, 21 school psychologists, 32 therapists and 19 workers to serve the needs of homeless students, officials said.

That hiring surge has met the requirements in the contract and has left CPS with 471 social workers and 391 school nurses, numbers CPS said haven’t been seen since at least 2007, when the district had thousands more students. Even so, there are 66 social worker positions and 37 nursing openings that haven’t been filled.

CPS did not make any officials available for an interview for this story.

Spokesman James Gherardi said in an emailed statement that dramatically increasing staffing levels will take time, but since the agreement the district “has made significant progress” in hiring and is “committed to investing in the staffing and supports our students need to access a high quality education.”

The union still values the agreement reached last fall and doesn’t have regrets about the strike. CTU Vice President Stacy Davis Gates, however, said the pandemic has proven what she knew back then: The contract alone was never going to undo decades of underfunding in schools and didn’t go far enough to more quickly fix these problems.

“Everyone — the mayor, the administrators at the Chicago Public Schools — told us that our collective bargaining agreement was not the place to advocate for” the common good, Davis Gates said in an interview. “Now that we’re in a pandemic we see very clearly … that the students who need the most in this moment are the students who already needed the most.

While the union says it doesn’t hold a grudge and is willing to move forward, lingering hostilities have clearly prevented any agreement of how to proceed with schooling during the pandemic.

The situation is so bad the union has threatened another strike over the district’s attempt to bring any students back even on a limited basis, saying CPS didn’t have proper safety precautions in place. And CPS has accused the CTU of continuing to “obstruct and mislead the public” about planning needed for a return to in-person learning and so has moved forward with its plans without union approval.

The mayor, meanwhile, still feels deep wounds from the strike and refuses to look at the contract agreement as a victory, leaving neither side viewing the other as a partner, Bruno said.

“I think the strike leaves a triggering effect,” he said. “It is the dominant cause of this antagonism. The mayor took this very personally and saw it as a threat to her leadership and authority. And so I’m sure it looms incredibly large in the way in which she views CTU.”

Still, Bruno said, CTU and CPS have shown in the past they can come to major agreements, like last fall, even when they don’t see eye to eye. That’s why he sees the new collective bargaining agreement and its protections on staffing and class sizes, even if they don’t go far enough, proving more pivotal for the future of Chicago’s schools than the broken relationship. Eventually, they’ll agree how and when to reopen schools, he said.

On her end, the mayor hasn’t done much to dispel the notion she holds a grudge. A month after the strike, Lightfoot said she expects the CTU and its allies to “have a continual drumbeat of complaints throughout my term … until they support and announce a candidate in opposition to me in the next election.”

Earlier this week, Lightfoot said she’d be “happy to engage with anyone” who has a genuine interest in helping the city’s children, but then, without saying it outright, suggested she believes the CTU has an alternate agenda.