Polls claim that the gap between Marie Newman, who unseated seven term Congressman Dan Lipinski in the March 2020 Democratic Primary election, and her Republican rival Mike Fricilone, is narrowing. but the district is strongly Democratic with an even stronger conservative edge. Not electing Newman to office would be a disaster for the 3rd Congressional District.

I don’t know Mike Fricilone, the Republican candidate for Congress in the 3rd District held for decades by the Lipinski family, father and then son.

But I do know he makes the same mistakes most Republicans do on the local level, focusing on extremist attacks against rivals rather than on advocating good policies for the district’s constituents.

This week, Fricilone touted a poll by Ogden & Fry, a polling firm founded by photographer and Republican activist Tom Swiss, which claims that he is within 2.2 percent of Marie Newman. I’m not sure I believe it but again, anyone can win any election. 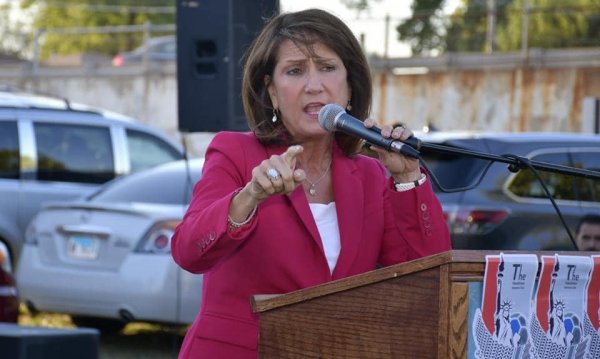 Newman defeated seven-term Congressman Dan Lipinski, a nice guy who survived on the back of the Democratic Party and his name but who lacked social skills to engage constituents or concerns outside of his comfort zone.

“Fall is officially here but our election is getting very hot. Just this week, Politico released a new poll about our race that shows that we are just 2.2% down from Marie Newman. This is really big news! This poll shows what we have known ever since socialist Marie Newman tried to defeat Dan Lipinski in 2018, she doesn’t share the values of the residents of our community. Her agenda is directly stolen from the most extreme members of the Washington progressive left, including Bernie Sanders and Alexandria Ocasio-Cortez. With your help, we can make sure that Marie Newman’s dangerous plans to raise taxes on everyone that pays them, defunding the police, Medicare for All, and the crazy Green New Deal never make it to Congress.”

I don’t know anything about Fricilone and I have covered Chicagoland politics for 45 years, which fuels my skepticism. But in today’s world, you can’t win a Cook County race (except by accident as in the case of Orland Park’s goofy Republican Mayor Keith Pekau) without connecting and identifying with the District’s conservative Democrats (Reagan Democrats).

Cook County Commissioner Sean Morrison easily won re-election defeating a well-funded challenge from “Our Revolution” candidate Abdelnasser Rashid. Rashid had strong extreme liberal Democratic backing but was derelict among conservative Democrats who are the base of the Southwest Suburbs. Plus he ran a lousy campaign. Like Pekau, Rashid knew how to turn friends into enemies with extremist policies, him to the far Left and Pekau to the far Right.

If your major skill is making enemies, your ill never get elected to office.

Morrison’s predecessor, Republican Liz Gorman, also held the County Board seat for several terms from 2002 until 2015, winning many Democratic votes because she built coalitions on both sides of the aisle and focused on the real needs of taxpayers and constituents, not on their emotions. The Chicago Tribune reported this weekend that Gorman is considering a run to unseat the very unpopular isolationist extremist Pekau, who is fast dragging Orland Park down the tubes

Newman connected with voters and won the Democratic Party nomination decisively in the March Primary and will face-off with Fricilone in the General Election on Tuesday Nov. 3, 2020. She won 52,384 to Lipinski who received 49,568 a margin of 2.6 percent but significant considering Lipinski was the incumbent.

Newman’s candidacy was drained by two other minor candidates, Rush Darwish and Charles Hughes, who siphoned off votes and money that could have made her margin even larger. The vote reflected the growing disenchantment voters had with Lipinski. Darwish raised more than $800,000 and yet only received 6,351 votes out of 110,852 cast in the election. Another poorly run campaign that wasted a lot of money and votes.

Palos Hills Mayor Jerry Bennett write, “Marie shares the same passion that I do for serving my constituents and I know that she will be an unwavering advocate for the hard-working people of Palos Hills and all of us in the Third District.”

Nothing is impossible in politics. Unknowns can win elections but usually only when the voters are extremely angry with the incumbents as they were in Orland Park when the ousted Dan McLaughlin and ended up with Pekau.

Clearly, Newman not only has the edge but offers the district the best representation. Many extremist candidates have done well in the 3rd District, but so far not well enough to embarrass the district. Not electing Newman would be an embarrassment.

(Ray Hanania is an award winning former Chicago City Hall reporter. His Op-Ed opinion columns on mainstream American politics and issues appear weekly in the Southwest News Newspaper Group on and on the Patch.com. His columns on Middle East issues appear weekly in the Arab News Newspaper, the Middle East’s leading English language publication. Reach Ray on his personal website hub at www.Hanania.com for information on his radio shows and on his podcasts.)