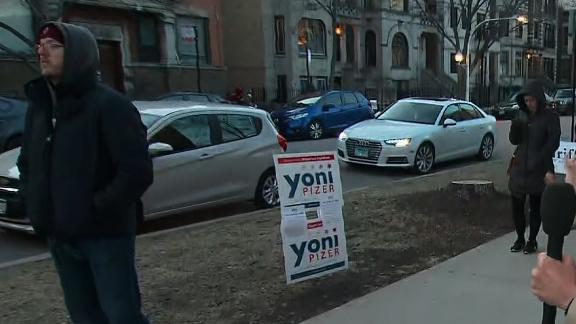 Marie Newman didn’t get to have the big election night party she’d been planning at her beloved local brewery.

With a growing coronavirus pandemic halting most large gatherings across the country, she celebrated her Democratic primary victory over incumbent Rep. Dan Lipinski of Illinois on Tuesday night with a virtual party on Facebook Live.

Lipinski, an eight-term incumbent, called her Wednesday afternoon to congratulate her, then held a news conference where he offered a lukewarm concession and committed to working with her.

As the Democratic nominee, Newman is now in a strong position to be the next member of Congress from Illinois’ 3rd District, which backed Hillary Clinton by 15 points in 2016.

But Newman didn’t just unseat any incumbent. She toppled a transportation subcommittee chairman who ran with the backing of the Chicago Tribune and whose last name has been on the ballot in this area for four decades. Lipinski was handpicked to succeed his father, who served in the House before him.

It’s an upset that has symbolic ramifications for the Democratic caucus. Lipinski is one of a small handful of Democrats left in the House who voted against the Affordable Care Act in 2010 and consistently votes against abortion rights. If Newman wins in November, she will have moved the caucus farther toward an almost exclusively pro-abortion rights party.

From executive to candidate

Newman’s background is as a marketing and advertising executive in Chicago. But organizing wasn’t new to her. When her son was bullied at school, she founded a national anti-bullying nonprofit in partnership with Sears. She later became the state spokesperson for Moms Demand Action, a gun control group, and ran her own consulting firm.

Running for Congress in 2018, she said, felt like a natural next step.

‘I’d been watching Lipinski for 10 years. For the longest time, I thought it was just choice that he was bad on,’ Newman told CNN Wednesday a reference to his Lipinski’s anti-abortion rights stance.

She put together a last-minute campaign that talked about reproductive rights — but also health care and immigration — and came up 2 points short.

Refusing to concede right away, Newman said that she wished ‘Mr. Lipinski to have a very painful evening.’ She earned heat for those remarks in 2018, but said Wednesday that it was a reaction to the Chicago political machine and the ‘disrespectful’ tactics used against her.

‘I learned that the Chicago machine is a bully, and that certain politicians are bullies,’ Newman said.

‘The prevailing knowledge 15 years ago was: ignore bullies and it will take their steam out,’ Newman said. ‘Well the more you ignore a bully, the more effective they are because you acknowledge that you are less than they are. And I’m not just willing to say Illinois 3 is less than the bullies.’

She signaled almost immediately that she would run again in 2020.

Getting into the race earlier was a major advantage. Newman had two years to pound the pavement and hold community meet-and-greets.

Outside groups supporting her got involved in the race, earlier too. Two years ago, a coalition of progressive groups put together a well-financed independent expenditure campaign for her the month before the primary. It was too late.

This time was different. EMILY’s List — the pro-abortion rights group that supports Democratic women — endorsed her in May 2019, 11 months before the election, and had been working with her informally long before that.

A similar coalition of groups from 2018 including NARAL Pro-Choice America, SEIU, the super PAC arm of EMILY’s List, Indivisible and the Illinois Federation of Teachers, invested $1.4 million in backing Newman this year.

‘There was one issue that loomed especially large in this campaign,’ Lipinski said Wednesday at his news conference. ‘The fact that I am pro-life.’ He went onto say that he was ‘pilloried’ on the issue, with outside groups outspending him six to one.

Given the electoral scare he had in 2018, some Democrats expected Lipinski to try to moderate more to fit a district with a suburban population that was growing more liberal.

‘Life begins at conception,’ Lipinski said Wednesday. ‘Knowing this, I can never give up protecting the most vulnerable human beings in the world simply to win an election.’

Although the source of the outside spending in this race would suggest that abortion was the most salient issue, Newman’s message was often more nuanced that that, which helped her resonate in what’s long been a working-class, more socially conservative district.

Like many of the Democrats who flipped GOP-held districts in 2018, Newman focused on health care, although she went farther than most of them in backing ‘Medicare for All’ and the Green New Deal.

Although Lipinski voted against the Affordable Care Act in 2010, he has opposed GOP efforts to roll it back and argued that Newman posed the greater risk to the law because of her support for Medicare for All.

In a rapidly diversifying district, immigration also became a hot issue, with Newman’s allies hitting Lipinski for voting against the 2010 Dream Act.

Two years ago, Lipinski won by mobilizing the Chicago political machine. But that machine isn’t as robust as it once was. Chicago Mayor Lori Lightfoot, for example, backed Newman.

‘When (Newman) beat Dan, she showed this is a new day in this community,’ Illinois Rep. Jan Schakowsky, one of Newman’s earliest supporters in 2018, told CNN Wednesday.

Newman had her own army of 3,000 volunteers who knocked on 110,000 doors. As of last week, the campaign had made about 100,000 phone calls. But when the coronavirus crisis hit, they shifted gears, making an additional 150,000 calls in the last four days. Most of her volunteers were in the district, Newman said, but there were also phonebanks in New York, California and Washington, DC.

Several presidential candidates backed Newman, and presidential-year enthusiasm may have energized the base in her favor. Of those who backed her, only Vermont Sen. Bernie Sanders was still in the race heading into Tuesday. He lost Illinois to former Vice President Joe Biden.

Newman hadn’t endorsed in the race. But like Biden, she ran strong in the suburbs. While turnout across the district was down from 2016, the percentage of people who showed up to vote was higher in the suburban areas of the district than in the city, according to her campaign.

A former political science professor, who first earned a master’s in engineering, Lipinski talks about the importance of having a ‘big tent’ in the Democratic Party on abortion rights, especially as Democrats try to make inroads in redder parts of the country.

But he’s been out of step with much of the caucus on major issues important to the base. Although he voted for the Equality Act, he was the only House Democrat not to co-sponsor the legislation, which extended civil rights protections to LGBTQ people.

The Democratic Congressional Campaign Committee had promised to blacklist all consultants who work for primary candidates against incumbents. That denied Newman the ability to continue working with some consultants from her 2018 race. But it didn’t translate to much institutional support for Lipinski. Rep. Cheri Bustos of Illinois, the chairwoman of the committee, was forced to cancel a fundraiser with Lipinski last year because of pressure from the left.

He didn’t even get the same treatment as Texas Rep. Henry Cuellar, another conservative Democrat who faced a similar primary earlier this month but survived. House Speaker Nancy Pelosi had flown to Texas to do a fundraiser with Cuellar.

Lipinski didn’t have the outside firepower that he did in 2018, when a super PAC affiliated with No Labels spent more than a million dollars on his behalf. What outside help Lipinski did have came in the form of minimal direct mail spending from a super PAC called the Center Forward Committee and the super PAC arm of Susan B. Anthony List, which typically backs Republican women opposed to abortion rights.

‘Congressman Lipinski has long been a profile in courage, bucking the sad trend of Democrat leaders vying to be the greatest advocate of abortion. We are deeply grateful for his bravery in standing strong,’ SBA List President Marjorie Dannenfelser said in a statement Wednesday.

‘For me, this is always about alignment,’ Newman said Wednesday, noting how much she’s heard about having ‘health care for all’ in her meetings with constituents.

‘So while I trust women and am pro-choice, it is one of many important issues to this district.’