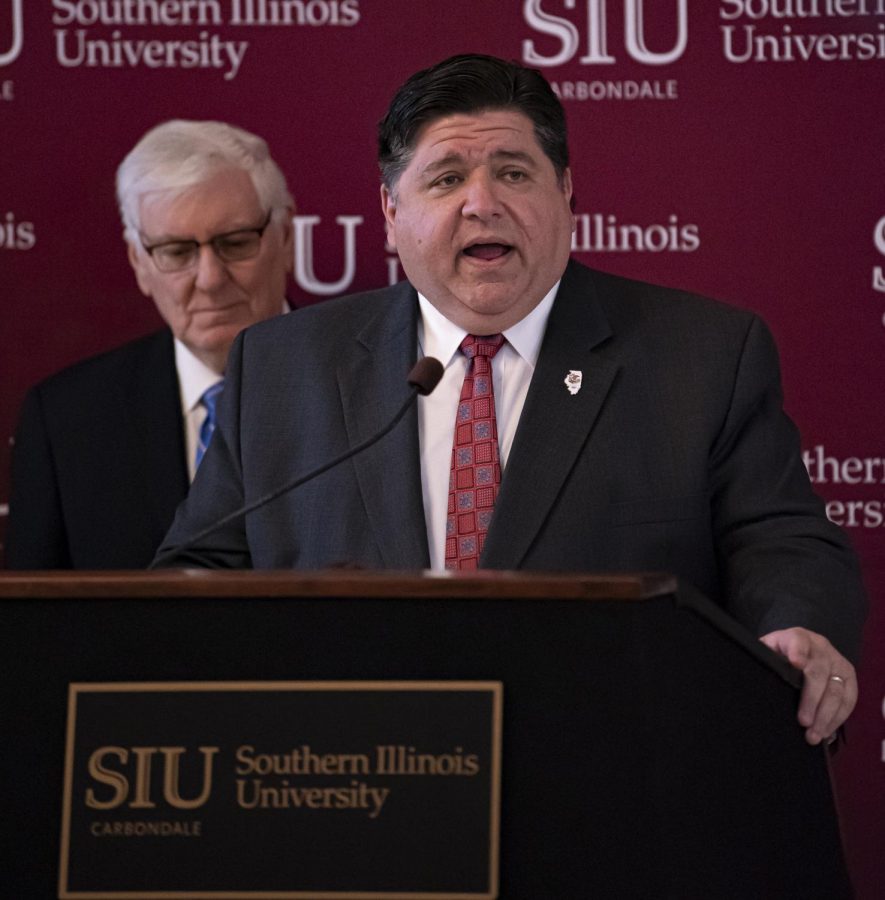 Gov. JB Pritzker visited SIU Thursday to announce the launch of a new Department of Children and Family Services training center at SIU in partnership with the School of Medicine.

This center is the third in Illinois and will provide a simulated home environment for those studying social work or training for DCFS to practice in and to gain experiential learning.

Interim Chancellor John Dunn said SIU is proud to be collaborating on the center with the University of Illinois Springfield.

“We are equally proud to have our School of Medicine in a lead role with the university,” Dunn said. “Together we will train social workers and other child advocates to better protect young people who may be in harm’s way.”

These are children who need someone to intervene in a difficult situation to open doors to a brighter future, Dunn said.

“As SIU helps the child advocates who put themselves in challenging situations on behalf of young people, we further our mission in service to the region,” Dunn said.

Mark Smith, acting director of DCFS in Illinois, said since the beginning of June, 91% of DCFS staff have gone through a two-day safety training.

“Adding a training center and a new partner with SIU allows us not only to train additional staff but to do the training right here where so many of our staff and public partners live,” Smith said.

Smith said continuing to move the Department of Children and Family Services forward is going to take new ideas that come from partners with the best minds in Illinois.

“We have a world class system of universities in this state. If we work together we can build a new child care system in Illinois that our children [serve] and we can be proud of,” Smith said. “Together we can protect children, strengthen families and create a brighter future for those we serve.”

Betsy Goulet, an  assistant professor at UIS who is in charge of their training program, helped to create the program at UIS based on a similar program in Minnesota.

Goulet said the simulation at UIS is held in a house and trainees will go to that house, knock on the door and conduct a home visit within the simulation to better train them for real life experiences.

Dunn said SIU doesn’t have a location or facility chosen for the training center yet but that administration will provide updates as that is decided.

When the press conference opened up for questions a reporter asked Pritzker to comment on a statement made by a ACLU attorney Heidi Dalenberg about the labs.

“The training is great but all the training in the world is not going to fix the foundational problems DCFS struggled with,”  Dalenberg said.

Pritzker said the ACLU has been a great protector of children across the state and that his administration listens to them.

“There is no chance that one simulation lab or three or four is going to change everything about DCFS,” Pritzker said. “[It is] one component of so many things we need to change and we are making those changes.”

Pritzker did not provide a number on how much this would cost but to meet the increased demand for training, Pritzker secured a 7.9% increase in funding for DCFS in FY20 and proposed a $147 million increase in FY21, a 20% increase over FY19 funding levels, according to a release from the Governor’s office.

News Editor Kallie Cox can be reached at [email protected] or on Twitter at @KallieECox.