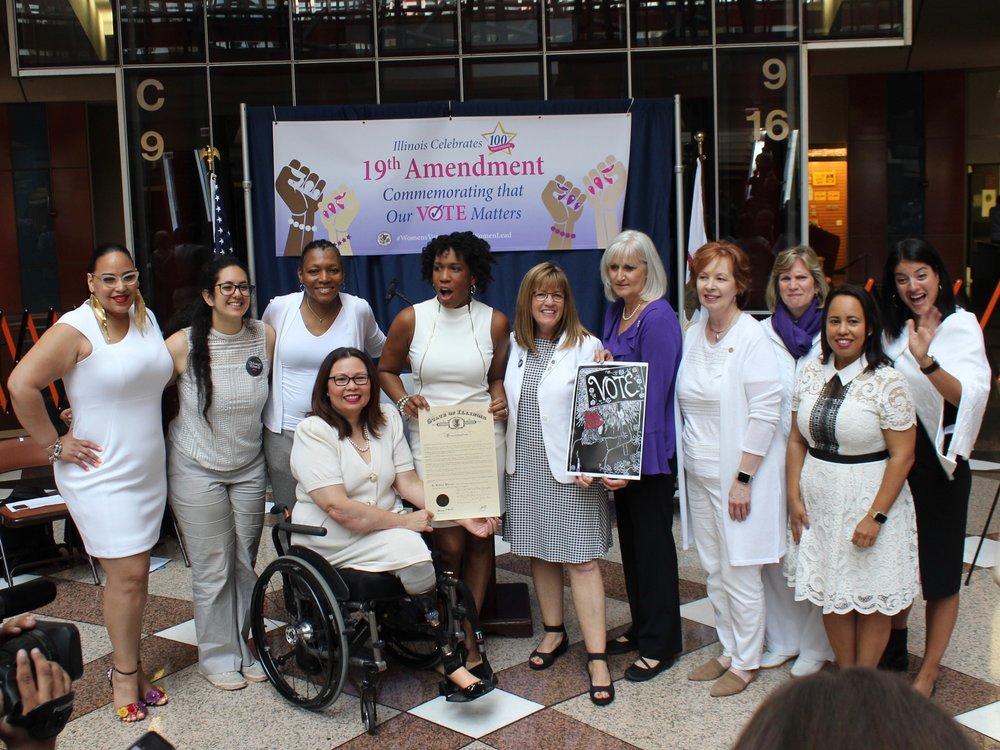 Women led by U.S. Sen. Tammy Duckworth, Lt. Gov. Juliana Stratton, and state Sen. Melinda Bush, all at center, brandish a proclamation declaring Monday to be Women’s Right to Vote Day in Illinois at the Thompson Center. (One Illinois/Ted Cox)

U.S. Sen. Tammy Duckworth and Lt. Gov. Juliana Stratton led a celebration Monday of the 100th anniversary of Illinois ratifying the 19th Amendment giving women the right to vote at the Thompson Center in Chicago.

“Today we honor the women who came before us, and the women who are hard at work today who are leading the cause for change,” Stratton said, sounding a persistent theme celebrating the achievements of the past, but also pointing out that the battle goes on.

“In a climate of voter suppression all across our nation, we won’t stop until every vote counts,” Stratton added.

Duckworth pointed to political devices such as voter-roll purges and modern-day poll taxes intended to target groups — most prominently women and minorities — and keep them from voting. She said the fight for voting rights was not over, “not when voter-suppression tactics still block so many people of color from the ballot.”

Primarily, though, it was a celebration of women earning the right to vote 100 years ago. Deputy Gov. Sol Flores read a proclamation from Gov. Pritzker citing Illinois’s history in the women’s suffrage movement, including the state granting women the right to vote for elected school offices in 1891, and in the presidential race and other county and municipal elections in 1913.

On June 4, 1919, Congress passed the 19th Amendment granting women the right to vote and sent it to the states for ratification. Within a week, on June 10, 1919, Illinois became one of the first states to ratify, and the ratification process was completed just over a year later, on Aug. 26, 1920. Pritzker proclaimed Monday to be Women’s Right to Vote Day in Illinois.

“And today, Illinois is leading the fight for women’s rights,” said state Sen. Melinda Bush of Grayslake. She pointed to passage of the Reproductive Health Act as the General Assembly was winding up its spring session at the end of last month, proudly adding she was lead sponsor in the Senate.

“As states across the country continue to pass dangerous laws to ban abortion, we say not in our state,” Bush said, adding that the RHA is “making abortion a fundamental right in our state, guaranteeing that, regardless of what happens at a federal level, abortion will remain safe, legal, and accessible to all women in Illinois.” 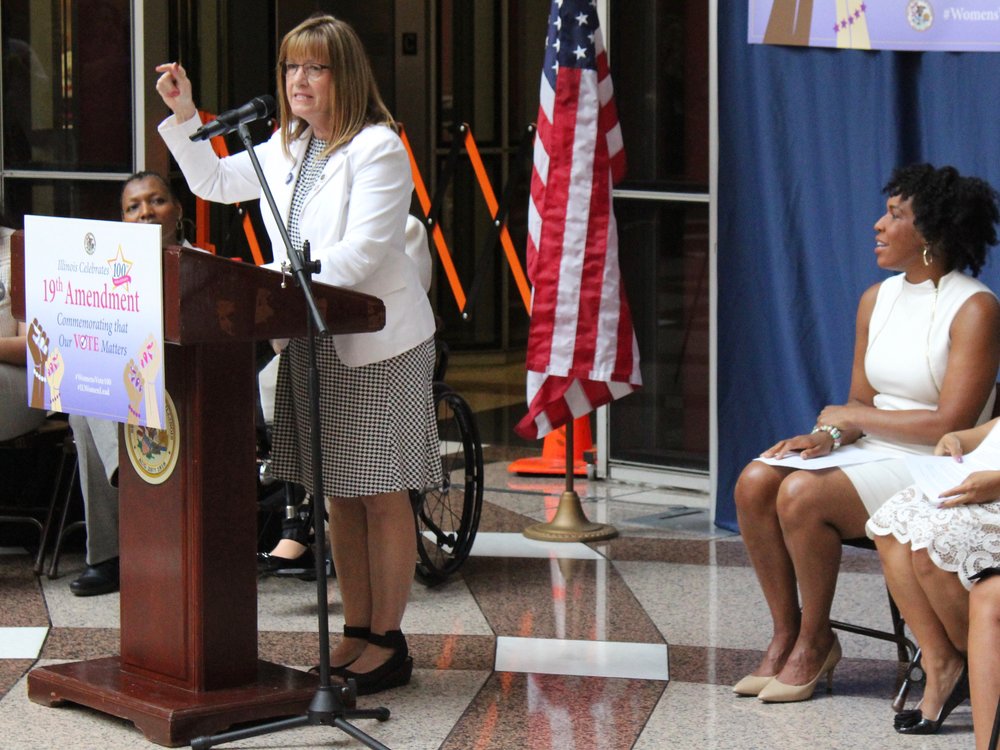 Crediting women who made the trip to Springfield to lobby for the bill, Bush said, “You made your voices heard. You forced action.” According to Bush, Pritzker intends to sign the RHA into law later this week.

“In the United States Senate, there are more white men named John than there are women of color,” Duckworth said. “This is wrong.”

Audra Wilson, executive director of the League of Women Voters of Illinois, called it “a special day of significance” for the organization, which has 3,700 members statewide across 40 chapters. Wilson, too, echoed the theme that the battle is not over.

“We must still contend with relentless attacks to impede the rights of citizens to cast their ballots,” she said. “Our mission will not be complete until all citizens have the ability to exercise this most hallowed right — the right to vote — without interference.”