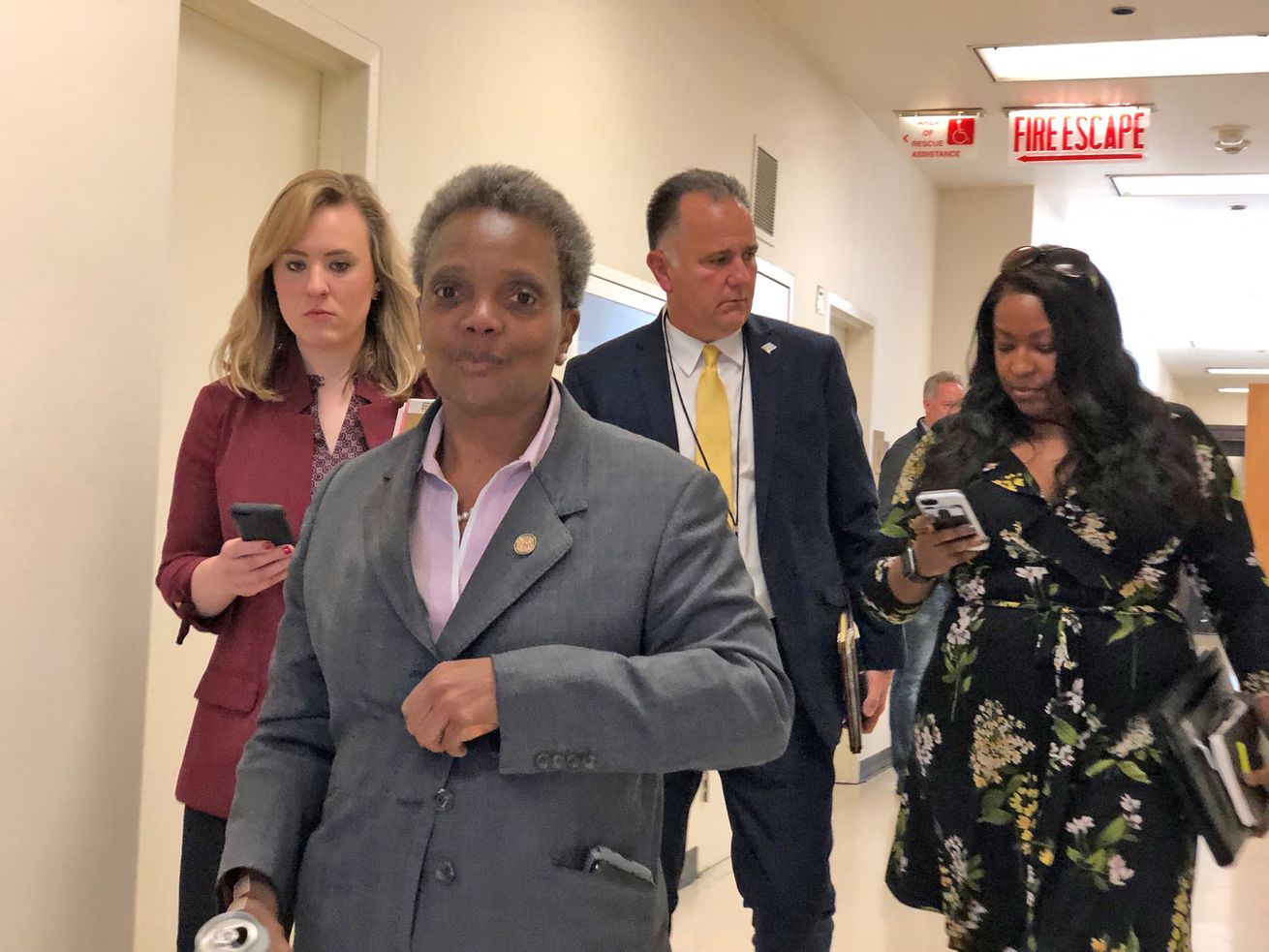 After seeing her 90-year-old mom off at the airport, the new mayor spent part of her first full day delivering a message of collaboration to a cabinet that is not her own.

Mayor Lori Lightfoot spent her first day on the job focusing on Memorial Day weekend safety, a broader plan to combat the traditional summer surge of violence and delivering a message of collaboration to a cabinet that is not her own.

“It’s definitely a brand new experience walking into the fifth floor, seeing `Office of the Mayor’ and recognizing, that’s me,” she said.

The mayor arrived at City Hall shortly after 9 a.m. to find a phalanx of television cameras waiting for her in the lobby and a few more cameras outside her fifth-floor office.

There was a good reason for the late start.

“I saw my mom and family off before they took to the airport. … I’m still kind of in the after-glow of yesterday. And it was bittersweet to see my mom go back home today,” Lightfoot said.

The mayor was asked what 90-year-old Ann Lightfoot thought of the inauguration ceremony at Wintrust Arena that turned into a love-fest for the new mayor and her message that “reform is here.”

“She was, of course, proud. But, growing up [and] living most of her life in a small town, she was pretty overwhelmed by the response yesterday and proud of her daughter for sure,” Lightfoot said.

About an hour later, Lightfoot addressed dozens of staffers, including several prominent holdovers from Mayor Rahm Emanuel’s office, before they began two hours of training on two important subjects: ethics, and complying with the Freedom of Information Act.

Former Mayor Rahm Emanuel spent eight years fighting and stalling FOIA requests tooth-and-nail. Too often, that triggered legal battles like the one that culminated in the court-ordered release of the Laquan McDonald shooting video and Emanuel’s private emails.

Lightfoot has promised to promptly honor FOIA requests from the news media and everyday Chicagoans, which would be a welcome relief.

About an hour later, it was time for her first cabinet meeting. It’s a cabinet largely dominated by Emanuel administration holdovers.

“We had six weeks to do a heckuva lot. So what we focused primarily on was building out the mayor’s office. We’ll be placing some names before the City Council next week for nomination to different departments,” she said.

Some of the more than hourlong cabinet meeting was spent getting acquainted and telling stories about “why they got into public service,” the new mayor said.

“I realized I didn’t say anything. I think they figured out why I got into public service. I’m a little over-exposed on that point,” Lightfoot joked.

When the ice was broken and the cabinet finally got down to serious business, it was time to talk about “collaboration” and about working together to combat the traditional summer surge of violence, beginning this holiday weekend.

Lightfoot said she’s well aware some question her ability to deliver on the powerful promise she made in her inaugural address to bring safety to “neighborhoods that resemble a war zone.”

But, she reiterated that the violence she has called “the biggest challenge we face” cannot be “treated as a law enforcement first and only strategy.”

That’s why it’ll be an all-hands-on-deck approach to combat summer violence, beginning this weekend.

“Law enforcement is not gonna be able to solve everything going on in the neighborhoods. Clearly they have a role to play. … [But] I also want to make sure that our remaining city departments understand that they have a role to play as well—from the parks to CPS to [Family and Support Services] to the libraries and so forth, the infrastructure departments,” she said.

“Everybody’s got to be rowing in the same direction. We’re very focusing on the areas we’re most concerned for this weekend. I’ll be out and very, very visible in those areas over the course of the weekend. We want people to enjoy what promises to be fairly warm weather but enjoy it safely. And I want to make sure our kids are safe.”