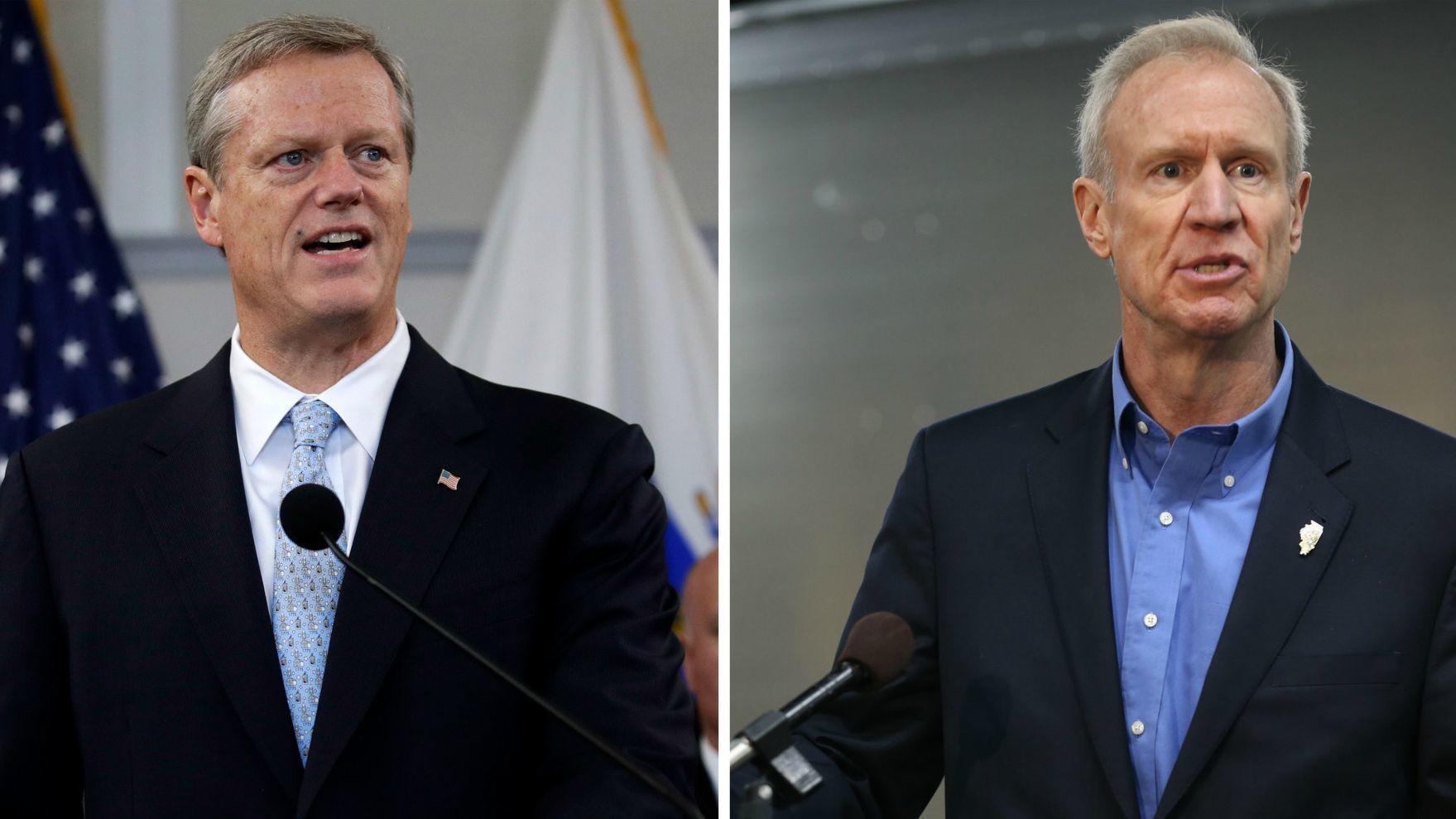 Within four days of each other in January 2015, two tall, sandy-haired, socially moderate Republicans in their late 50s were inaugurated to their first terms as governor in states where Democrats enjoyed overwhelming legislative majorities.

Voters had narrowly handed both men an opportunity to lead skillfully from the middle — to advance Republican ideas, check Democratic excesses and find bipartisan compromise on pressing issues.

Rauner is trailing his Democratic opponent J.B. Pritzker by 16 percentage points, according to an average of polls maintained by RealClearPolitics.

Baker is leading his Democratic challenger Jay Gonzalez by 40 percentage points according to RealClearPolitics.

A Morning Consult survey released in October found that Rauner was the third least popular governor in the United States with a 25 percent approval rating.

Baker, with a 70 percent approval rating, was the most popular governor in the country.

Rauner chose to go down — and I do mean down — a confrontational path. His strategy was to try to browbeat and insult “corrupt” Democratic legislative leaders into passing items on his highly ideological 44-point pro-business agenda, and, when that failed, to wait until they blinked during a 736-day budget stalemate.

Rauner congratulated himself on his stubbornness, impatience and resolve as the state’s fiscal condition continued to deteriorate and his poll numbers plummeted.

Baker, in contrast, chose the path of accommodation. “He hasn’t picked a lot fights either politically or personally with Democratic leaders,” said Peter Ubertaccio, a political scientist at Stonehill College in Easton, Mass. “He picks his battles carefully and never lets it get personal.”

“Differences of opinion crop up all the time,” wrote the Lowell Sun newspaper in endorsing Baker for re-election Monday. But “there is an attitude of respect and collegiality among lawmakers that says adults are at work and we’ll get this done.”

Baker told Governing magazine, “We have a political climate these days where people seek differences because that’s where the bite is. I spend most of my time doing just the opposite. I’m looking for places where we can find agreement.”

Baker cultivated good relations with Democratic House Speaker Robert A. DeLeo — who, like Illinois House Speaker Michael Madigan is more of a canny political tactician than an ideologue — in an alliance that Ubertaccio said “drives progressive activists crazy” for how it blocks, weakens or slow-walks liberal initiatives.

Many conservatives also aren’t pleased. Twenty percent of Bay State GOP voters said they viewed Baker unfavorably in a poll taken last spring, compared with just 10 percent of Democrats who held that view. The Massachusetts Republican Assembly is currently urging voters to “blank” Baker — cast no vote for governor just as Baker ostentatiously cast no vote for president in 2016.

The right-wing organization is angry that Baker has consistently criticized President Donald Trump, has backed transgender rights, Obamacare and stronger gun-control measures among other RINO (Republican In Name Only) apostasies.

But Baker continues to identify as a fiscal conservative and credits spending discipline for achieving a budget surplus. The “grand bargain” he struck with the Democratic legislature limited the scope of a minimum-wage increase, eliminated mandatory overtime pay on Sundays and holidays for retail workers, and reinstated a business-friendly annual sales-tax holiday in exchange for a raft of liberal concessions.

Illinois is not Massachusetts, to be sure, and Rauner arguably faced deeper and more urgent problems than Baker when he took office.

But next week’s winners should take heed:

The contrasting results achieved so far by these outwardly very similar men shows that, while the public may thrill to invective and rage, what most constituents want are adult politicians who know how to work together without rancor, split their differences and get things done.