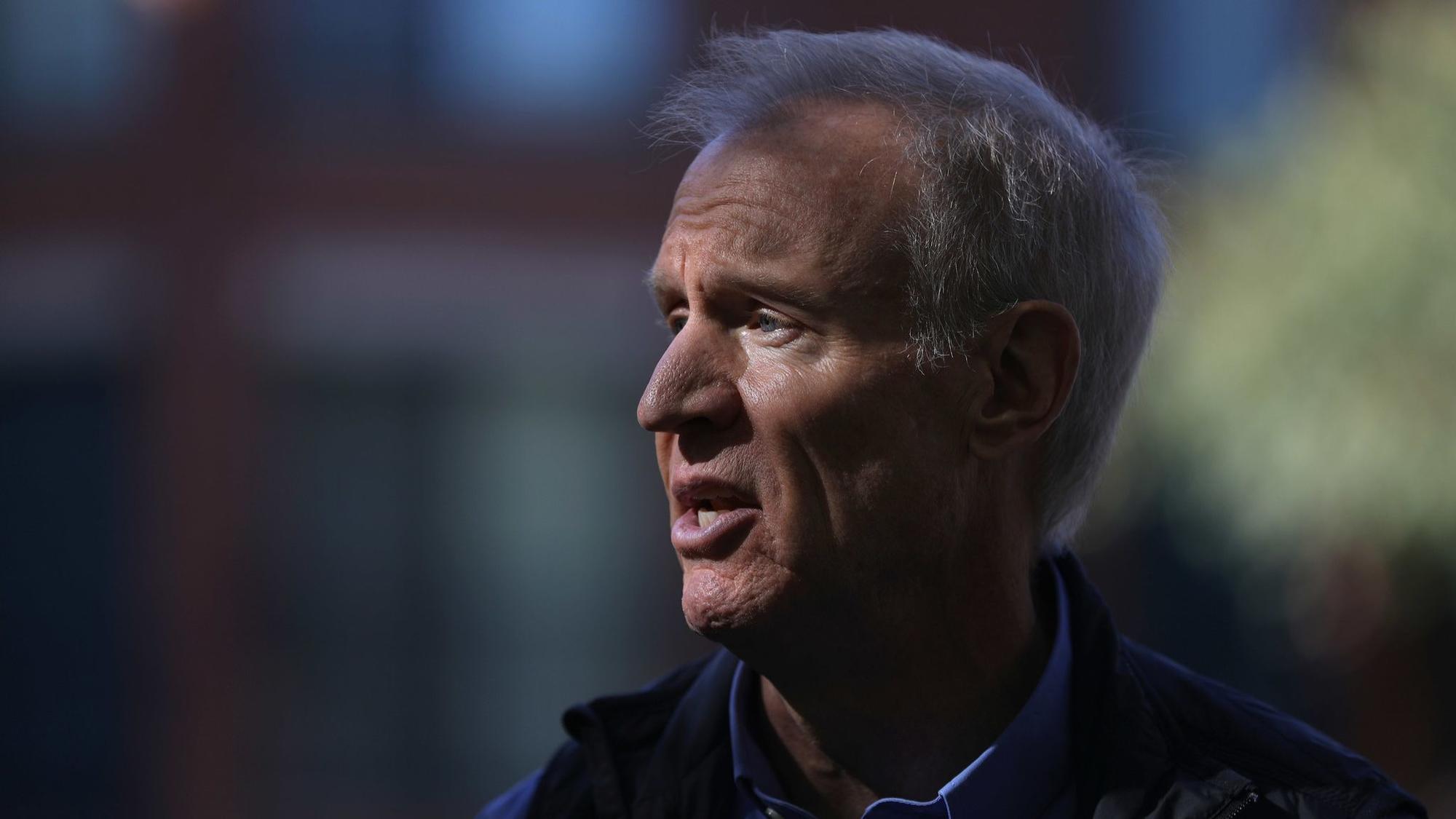 Welcome to Clout Street: Morning Spin, our weekday feature to catch you up with what’s going on in government and politics from Chicago to Springfield. Subscribe here.

Republican Gov. Bruce Rauner appeared on WGN-AM 720 on Wednesday, where host Steve Cochran asked him about the controversial TV ad that shows a character saying a bleeped F-word to describe Illinois’ future if Democratic challenger J.B. Pritzker is elected governor.

In the interview, Cochran specifically asked Rauner: “Did that ad come from you or from somebody else?

Rauner replied: “Well, it didn’t come from me, but it’s an effort to break through the clutter and get a message out about how devastating it will be to have Pritzker and Madigan in power together.”

The ad displays the required disclaimer that it was paid for by Rauner’s campaign.

Now roll the tape from last Thursday in a different radio interview in a Downstate location.

Rauner appeared on WFMB-AM 1450 in Springfield, and host Sam Madonia asked the governor about the controversial ad, including: “Do you have to OK all the ads before they run?”

Rauner replied: “I see most of the ads. I don’t see them all. I signed off on that ad because the truth has to get out. We’ve got to break through the clutter.”

During that Springfield interview, Rauner also continued to play regional politics in battling Pritzker. “He doesn’t care about central Illinois,” the governor said. “I don’t think Pritzker knows where Springfield is. He’s all about the dominance of Madigan, and we’ve got to stop him.”

Pritzker’s campaign said it has made more than 100 visits to Springfield during the primary and general election campaigns. (Rick Pearson)

*Gov. Bruce Rauner will attend the Jewish United Fund of Metropolitan Chicago interfaith gathering in honor of the victims of the Pittsburgh synagogue shooting. He’ll also make campaign stops in Quincy and Peoria.

*J.B. Pritzker has a campaign stop scheduled in Bellwood.

The county submitted court papers several weeks ago asking that it be let out from federal oversight stemming from Shakman, and a court-appointed administrator agreed that the county is in “substantial compliance” with long-standing prohibitions against patronage. The move was made official in court Wednesday and will allow Cook County government to hire and fire workers without external oversight of its employment practices.

Michael Shakman in 1969 filed the case that led to the accord after he lost an election while opposed by a political army loyal to then-Mayor Richard J. Daley, who also was chairman of the Cook County Democratic Party.

“When I took office, I made clear that we needed to reform and reshape Cook County government and that included professionalizing the county’s employment practices in an accountable and transparent way,” Board President Toni Preckwinkle said in a statement.

At the time it was announced, Cook County commissioners and other officials hailed the county’s progress in reforming its hiring processes. But Republican Cook County Commissioner Tim Schneider expressed concern that Preckwinkle’s interest in “eliminating any checks and balances at the county, and her position as Democratic county chairwoman, might offer future opportunities to return to past practices.” (Gregory Pratt)

*Early voting way up for midterms in Illinois: State Board of Elections officials said that with five days remaining for early voting, the total this year already has surpassed the number cast in the 2014 general election.

Board spokesman Matt Dietrich said nearly 840,000 early votes and votes by mail had been cast as of Wednesday afternoon. That compares with 791,000 total early votes cast four years ago.

Dietrich said that at this point in 2016, just more than 1 million early votes had been cast. Voter turnout is traditionally heavier in presidential election years than in midterms.

In recent years, turnout for presidential elections has consistently been around 70 percent while midterm turnout generally is around 50 percent, Dietrich said. In 2016, Illinois recorded a total of 1.9 million early votes cast either at polling places or by mail.

Trump on Wednesday tweeted that “so-called Birthright Citizenship, which costs our Country billions of dollars and is very unfair to our citizens, will be ended one way or the other.” Constitutional experts doubt it, and U.S. House Speaker Paul Ryan said Trump can’t make the change on his own.

“You obviously cannot do that,” Ryan told a Kentucky radio station.

The president’s idea comes days before the midterm elections as he travels the country trying to boost Republican congressional candidates.

An ad posted on the Stella For Congress page shows a desolate community with a photoshopped billboard reading: “Congratulations Madame Speaker Nancy Pelosi” and telling voters they should “help President Trump keep America on track and thriving.” It warns “a vote for Foster is a vote for a Speaker Pelosi.”

“Only you can stop this from becoming reality!” the ad says.

In reality, the ad displays the community of Jaywick Sands, which is not in Illinois’ west suburban 11th Congressional District, not in Illinois, not in the Midwest, not even in the United States.

Jaywick Sands is a community in Essex, a county in England that is northeast of London. The BBC reported on the candidate’s use of the photo and quoted Paul Honeywood, a local government official.

“I know that many Jaywick Sands residents will be outraged at being smeared in this way, and rightly so,” the BBC quoted Honeywood as saying.

The community previously was listed by the British government in 2010 and 2015 as the most deprived area of England but is now making a comeback.

Raquel Mitchell, director of operations for Stella’s campaign, said in an email: “Our intent was never to smear the town in the photo, now known to us as Jaywick Sands in Essex. We never used the name. For us it was an example of a town overburdened by poor governance, which is exactly what we in our district are seeking to prevent at every level.” (Rick Pearson)

*Illinois’ political playlist: Some Spotify users have been offered a midterm election playlist made up of songs “uniquely popular in Illinois to take to the polls.”

We present, without comment, some of the song titles:

*Ex-Vice President Biden stumps for Democrat Underwood: “The very character of our country … is on the ballot.” Ryan will be in town for Hultgren on Friday, Obama for Democrats on Sunday.

*Most schools get passing grade in overhauled state report card that focuses on growth rather than passing rates.

*In the early contest for Chicago city treasurer, Ald. Scott Waguespack, 32nd, has given $15,000 to Peter Gariepy’s campaign. Waguespack is head of the council’s Progressive Caucus. Ald. Ameya Pawar, 47th, entered the race earlier this week.