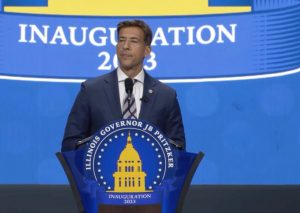 Secretary of State Alexi Giannoulias is pictured during his inauguration on Monday, Jan. 10 at the Bank of Springfield Center. (Capitol News Illinois photo by Jerry Nowicki)

SPRINGFIELD – For newly sworn-in Secretary of State Alexi Giannoulias, customer service is the central mission as he assumes the state’s second-largest constitutional office, replacing the man who had held it for nearly a quarter century.

“Modernization and bringing new technology is going to be at the forefront of everything we do,” Giannoulias said in an interview with Capitol News Illinois at the end of his second week in office. “This office is rooted in customer service, and my goal is to provide the best customer service possible.”

With over 4,000 employees divided among 20 departments, the secretary of state’s office deals more with the public directly than any other constitutional office. Most well-known for overseeing driver’s licenses and vehicle registrations, the office is also responsible for supporting the state’s libraries, keeping an organ and tissue donation registry and maintaining the 20-building Capitol Complex among other tasks.

The report outlined priority areas for the office, including improving driver services facilities, ethics and office policies, and technology enhancements. The report was also informed by ideas and suggestions submitted by more than 800 Illinoisans through RevUpIllinois, a website run through the secretary of state’s office that allows residents to submit a survey on the office’s performance.

“We had some great suggestions, some were ideas we hadn’t thought of. Some were complaints that gave us a good idea of what we need to focus on, so they were critical,” Giannoulias said. “And I would encourage people to continue to send us their ideas.”

Late last year, Giannoulias asked state Rep. Dan Brady, R-Bloomington, to serve on his transition team. Although it may be seen as fairly unusual for a defeated opponent to participate in this process, Brady said he was “pleasantly surprised” by the offer.

“I appreciate the opportunity to continue service in that way, using my expertise and experience and suggesting some of the things I talked about along the campaign trail,” Brady said. “It was an opportunity of sharing knowledges and experiences that hopefully will be helpful.”

For both Giannoulias and Brady, this move says a lot about the office’s capability for bipartisanship. In many ways it’s also a testament to the legacy of outgoing secretary Jesse White, who had held the office since 1999 until his retirement at the age of 88 this year.

White praised both candidates in the general election, noting he had worked with both of them on policy proposals. The retired secretary also had crossover appeal with voters as the perennial lead vote-getter on the statewide ticket throughout his career.

“I think, in general, people are sick and tired of people who just hate the other party and won’t work with them and I pride myself on always working with anyone who has good ideas, whether they’re Democrat or Republican,” Giannoulias said.

Brady said some of his ideas that made it into the final report included partnering with community colleges to lease space for DMV facilities that already have modern infrastructure capabilities, expanding remote services and cross-training employees to help with both driver and vehicle services.

One of Giannoulias’ top priorities for the office is making driver service facilities among the most “customer centric and accessible in the country.”

Giannoulias also noted modernization will “play a role in every single department,” not just for driver services.

“It’s been a passion of mine and I want to see those numbers increase from the standpoint of registration and how do we do more, not just in the facilities, but across the state,” he said.

Some of the report’s suggestions to increase donor registration numbers include automating the donor process to ease registration burdens, training secretary of state staff on organ donation so they can better inform the public, and working with the coroner and medical offices to improve the process.

On Giannoulias’ first day in office, he signed an executive order aimed at improving ethics and transparency in the office, a promise he made during his inaugural speech.

The order outlines six provisions, including a review of state vehicles to ensure they are only used for business-related functions, strengthening the office’s sexual harassment policy and prohibiting secretary of state employees from contributing to the office’s political fund.

Now, Giannoulias says it’s all about implementing these suggestions.

“We will have digital IDs and digital driver’s license and E-title system, we’re going to do all that,” Giannoulias said. “But right now we have to modernize the current process as is, to make sure people aren’t waiting in line, to make sure a piece of paper doesn’t touch nine hands before it gets back to a customer.”