A Kankakee County judge ruled a provision of a criminal justice reform law that eliminates cash bail for defendants deprives “the courts of their inherent authority to administer and control their courtrooms and to set bail.”

The ruling that was issued late Wednesday evening from Thomas Cunnington, chief judge of the 21st Judicial Circuit. His decision arrived a little more than a week after he heard arguments over the massive criminal justice reform law known as the SAFE-T Act.

One of the most controversial provisions of the SAFE-T Act was the elimination of cash bail for criminal defendants.

In the conclusion of Cunnington’s ruling, he said Illinois Supreme Court determined the “administration of the justice system” is an “inherent power of the courts” and the setting of bail falls within that administrative power.

Cunnington said the “appropriateness of bail rests with the authority of the court and may not be determined by legislative fiat.”

Cunnington ruled the pretrial provisions of the SAFE-T Act “violate this separation of powers principle underlying our system of governance by depriving the courts of their inherent authority to administer and control their courtrooms and to set bail.”

In response to Cunnington’s ruling, Illinois Attorney General Kwame Raoul said “regardless of today’s circuit court decision, all parts of the SAFE-T Act, including the pretrial release portions addressed in the court’s decision, will go into effect Jan 1.”

“For instance, the right of individuals awaiting criminal trials – people who have not been convicted of a crime and are presumed innocent – to seek release from jail without having to pay cash bail will go into effect in a few short days, despite the court’s ruling against those provisions,” Raoul said.

However, Kankakee County State’s Attorney Jim Rowe said the “immediate net effect of this ruling is that the pretrial release provisions and bail reform will not go into effect in the 65 counties that were party to the lawsuit.”

Those lawsuits were consolidated into one case that landed in Cunnington’s courtroom.

The lead prosecutors on the case include Rowe, James Glasgow of Will County, Patrick Kenneally of McHenry County, Jacqueline Lacy of Vermilion County, Eric Weis of Kendall County and Dan Wright of Sangamon County.

Rowe and Glasgow were among the first prosecutors to file lawsuits that aimed to stop the cashless bail provision of the law from going into effect on Jan. 1.

The two prosecutors filed their lawsuits on Sept. 16, about a year and half after Pritzker signed the SAFE-T Act into the law.

At the time Glasgow’s lawsuit was filed, Pritzker’s spokeswoman, Jordan Abudayyeh, said his lawsuit is a “weak attempt to protect the status quo that lets murders and abusers pay their way out of jail.” 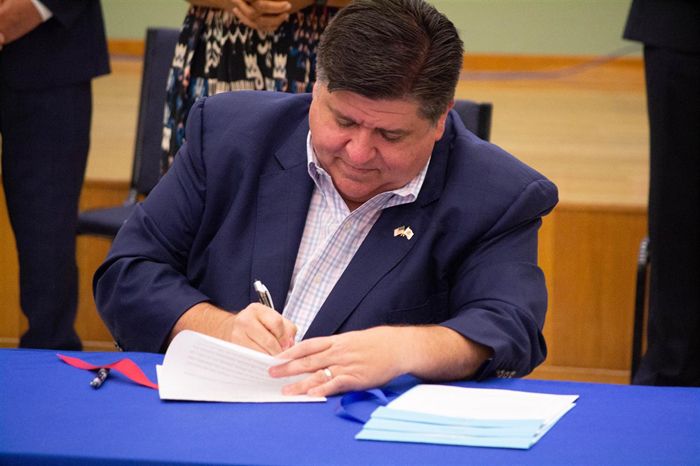 Gov. JB Pritzker is pictured signing a bill in a file photo. Several new laws will go into effect in Illinois on Jan. 1, 2023. (Jerry Nowicki/)