With municipal elections just months away, Chicago’s leaders are looking back at another distressingly violent year.

The University of Chicago Crime Lab uses a data-focused approach to study crime and crime reduction programs, using data supplied by the Chicago Police Department. Crime Lab Director of Programs Kim Smith says while some of 2022’s trends offer reason to hope for continued improvement, there’s more to learn and more work to do.

“Those are certainly numbers going in the right direction,” Smith said. “Unfortunately, we’re still not where we were before the pandemic before the really historic increase that we experienced in 2020.” 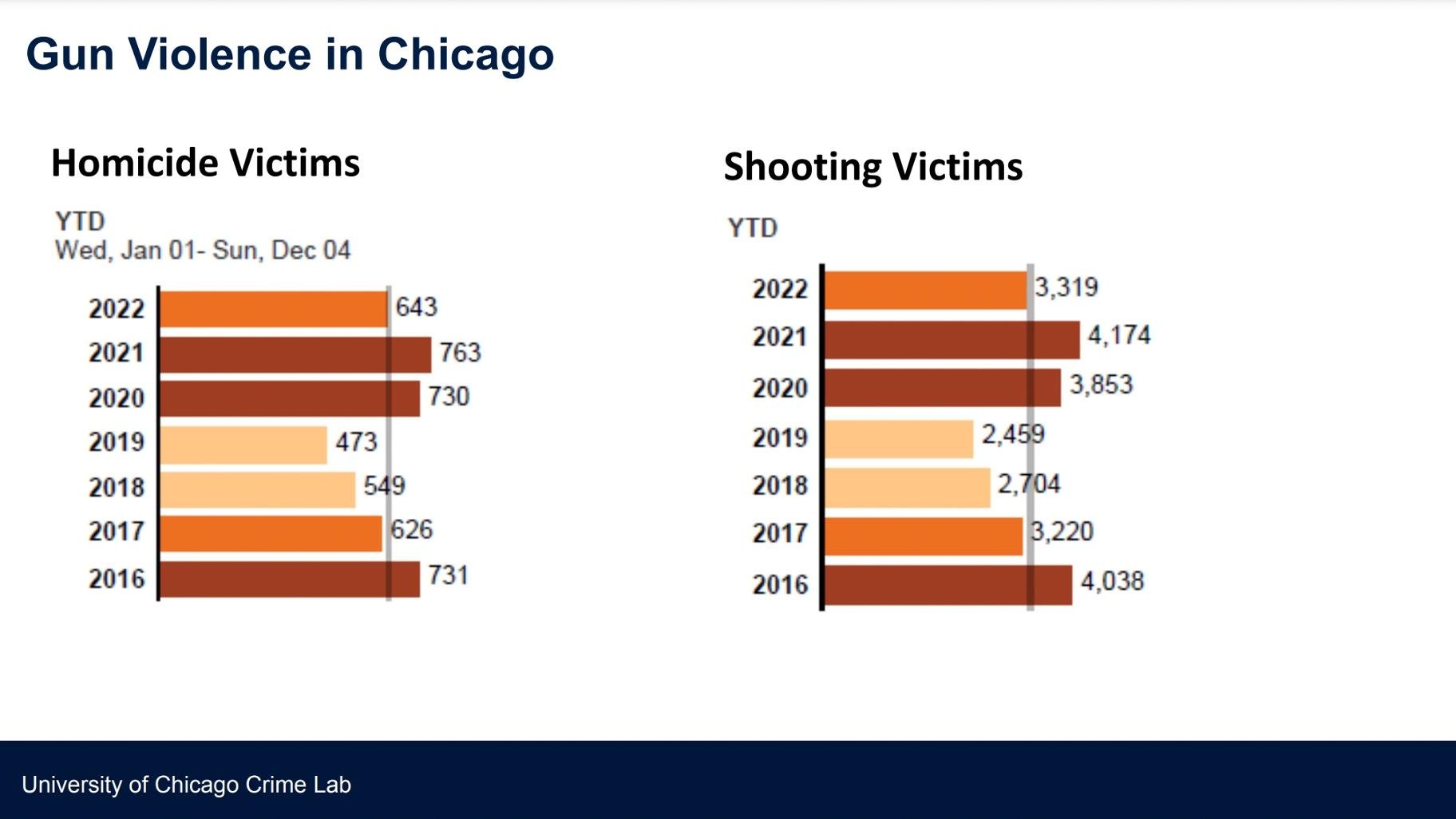 What exactly is driving down homicide and shooting rates remains unclear, Smith says.

“We know there’s a lot happening. There are changes to the criminal justice system and potentially changes to policing strategies. We know that community violence intervention organizations have received funding from public sectors that they typically were not able to kind of access previously,” she said. “The social service sector has been rebounding and that has really important implications for crime and violence given the really devastating economic and mental health impacts of the pandemic.”

She also says that what is causing shootings is not necessarily what people might think.

“A lot of shootings and homicides in Chicago are actually the result of an altercation, an argument that escalates and turns violent unfortunately, because a gun is at hand,” she said. “That has really important implications for solutions. Programs that kind of leverage cognitive behavioral principles or provide individuals with the tools to navigate those situations differently, therefore can be really impactful if the large majority of incidents stem from altercations or arguments.”

Smith says there is a wider misconception that crime in Chicago is largely about gang disputes over drug turf.

“And while those certainly do take place, our read of the narrative data and also conversations with individuals who have potentially been exposed or involved with violence suggest that these altercations are really at the root of the gun violence challenge,” Smith said.

“For the majority of history Chicago, New York and L.A. actually looked very similar when it came to homicide rates. The two points of divergence were during the prohibition period and then right now,” Smith said. “The reason that’s important is because…we can look to those cities and understand what strategies, what policies did they implement and how might we be able to leverage those?” 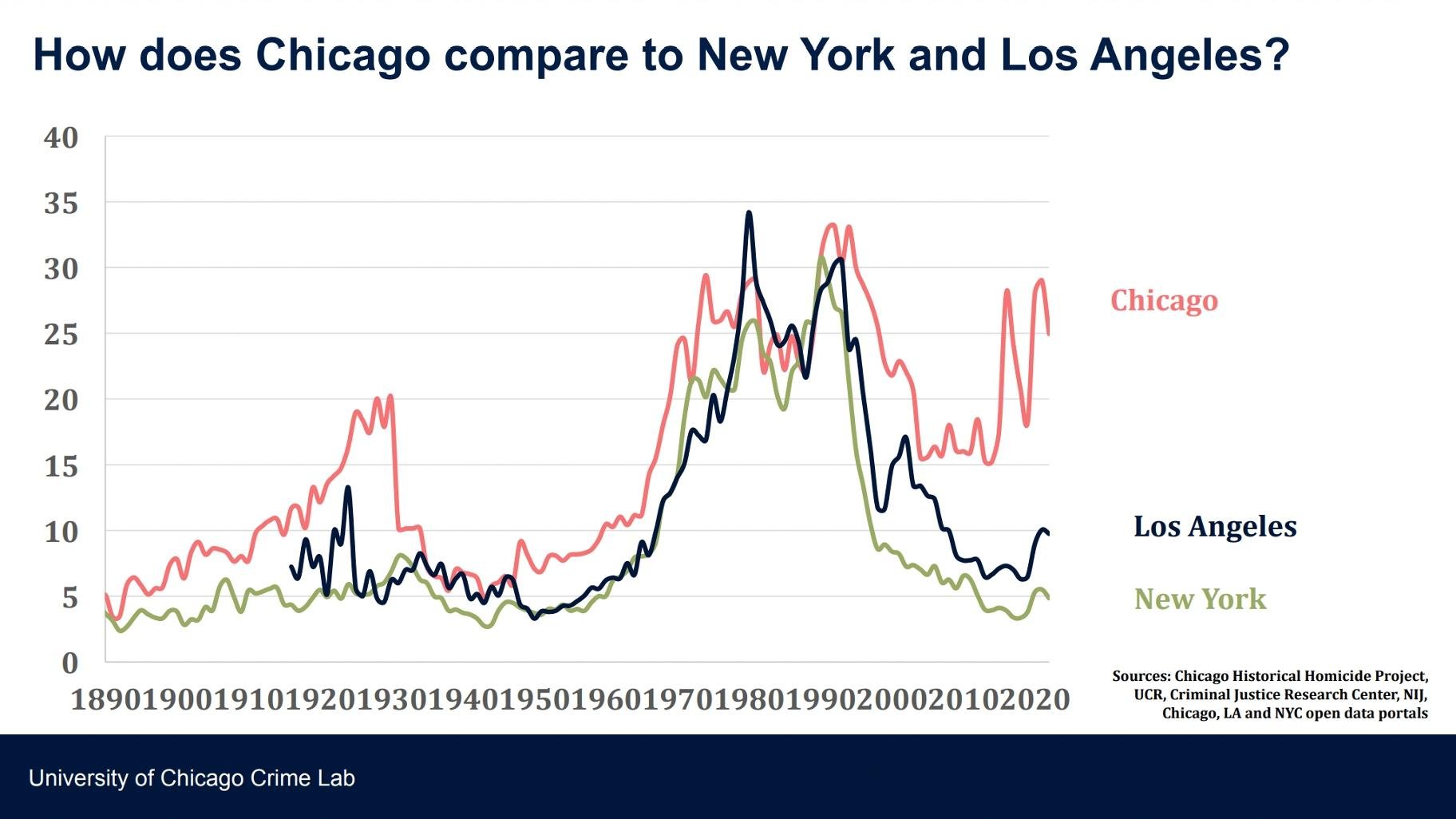 Smith outlines some of what Los Angeles and New York have done to combat violence.

“They invested a lot in community violence intervention programs. And I actually think that’s an area where Chicago is starting to leave the country in terms of our ability to innovate and really conduct incredibly rigorous research about which community violence intervention programs work and for whom. So while L.A. led the effort there historically, I think Chicago is quickly emerging as a leader in that space,” Smith said. “Both cities also invested heavily in policing and specifically reforming their police departments to be much more constitutionally focused and community oriented.” 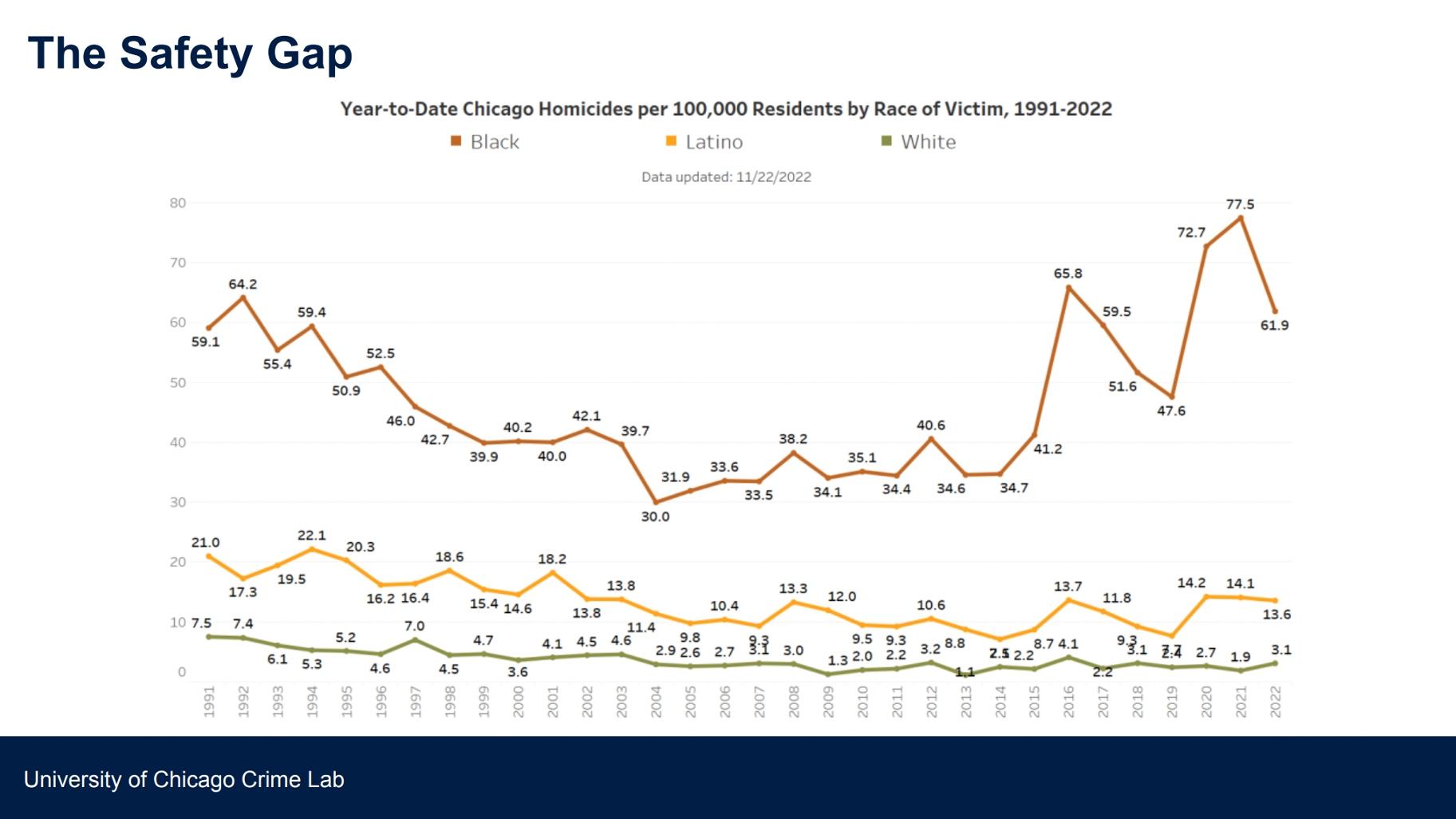 Smith also explained their findings on the “safety gap,” which she describes as the difference in the homicide rate between different groups of people.

“You can look at it by neighborhood and try to understand the safety gap by neighborhood. You can also look at the safety gap by race and that’s what we’re showing here. So we’re looking at the difference in the homicide rate of Black Chicagoans relative to the homicide rate of White Chicagoans and Latino Chicagoans,” Smith said. “While over the past year, the safety gap has narrowed, it’s still incredibly wide and much wider than it has been historically. And that I think is really important as we’re thinking about solutions, we know that Black Chicagoans and Black men in particular already bear such a disproportionate burden of the harms of our primary policy lever to addressing gun violence, which is policing in the criminal justice system.”

Smith said that while solutions are crafted, policy makers need to be thoughtful “that the solutions do not overburden a population that is both experiencing significant harms from the criminal justice system and high rates of gun violence.”