Lathrop Homes, 2808 N. Leavitt St., was once the largest public housing community on the North Side with about 900 units. Developers have tried to turn it into a mixed-income community since 2001.

The first phase of development was completed in 2019, creating about 400 housing units with varying prices. But progress has stalled on hundreds more promised apartments.

“We’ll continue to fight here to make sure the remaining buildings are renovated because the northern side of the development is so beautiful and there’s no reason that the part that’s been left can’t be the same,” said the Rev. Paula Cripps-Vallejo of Humboldt Park United Methodist Church.

Leaders from the churches — named the Logan Square Ecumenical Alliance — want to see Chicago’s Housing Authority finish the redevelopment of Lathrop Homes and replace the hundreds of public housing units that were converted into market-value apartments.

“For Chicago’s Housing Authority to know the impact that homelessness has, especially on Black and Brown families throughout Chicago, and still continue to sit on the millions of federal dollars they’re supposed to use to house people, it’s not acceptable,” Cripps-Vallejo said. “It’s immoral.” 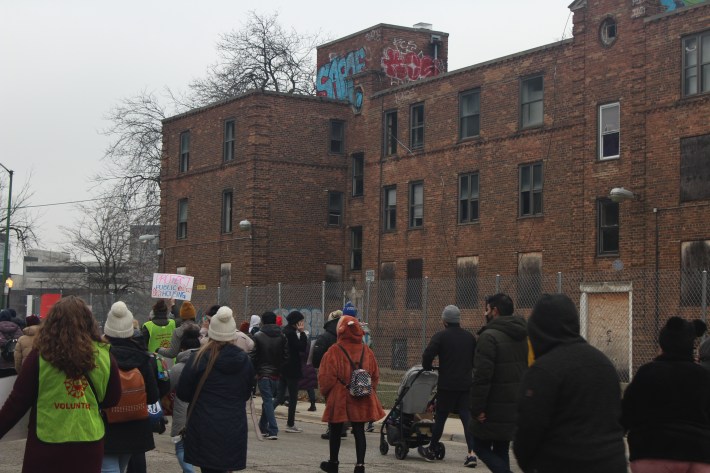 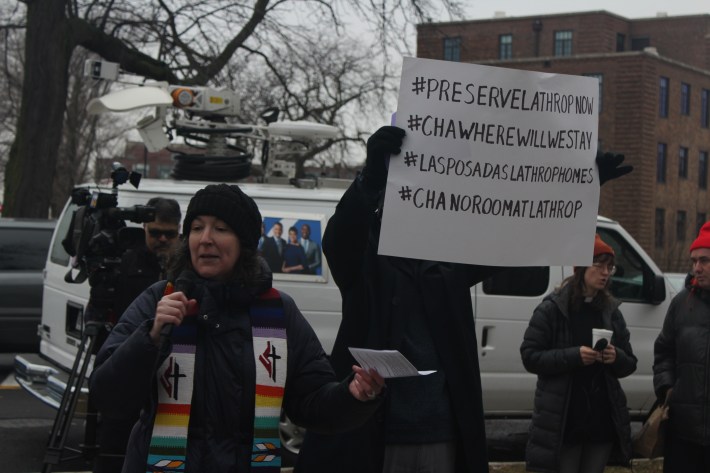 Credit: Kayleigh Padar//Block Club ChicagoOne of the actions’ organizers, Rev. Paula Cripps-Vallejo of Humboldt Park United Methodist Church, encouraged supporters to take photos of the buildings in disrepair and post them online with these hashtags.

As supporters marched with church leaders through the undeveloped section of Lathrop Homes, volunteers reenacted the biblical story of Jesus’ birth as Mary and Joseph searched for a room at an inn.

The procession — named Las Posadas after the Spanish word for inns — is a Christmas tradition in parts of the United States and Latin America.

For the past 10 years, the group has hosted these demonstrations at public housing sites to draw attention to homelessness in the city.

At various buildings, the volunteers called out asking if there was room for a holy family to live, and they were turned away.

“The idea is that all families are holy families and all families should be housed,” said organizer Lindsey Joyce, a pastor at Grace United Methodist Church in Logan Square. “We’re back here again after 10 years because the promises made still haven’t been fulfilled.” 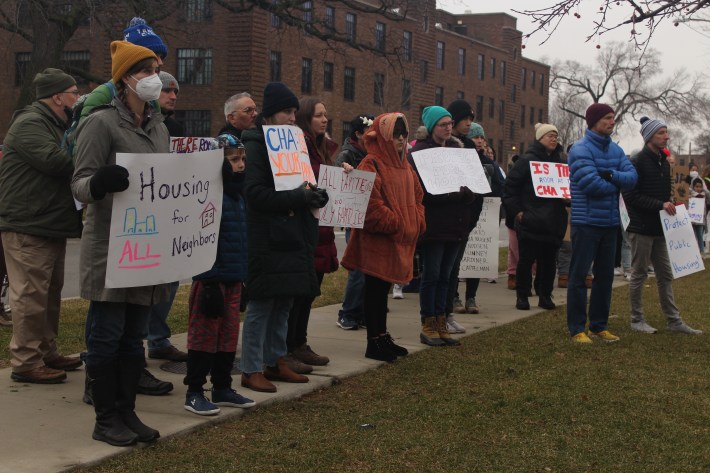 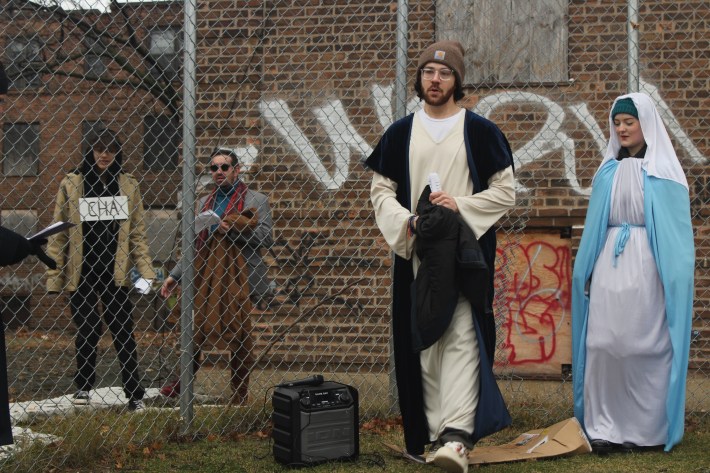 Former residents of the Lathrop Homes shared their experiences after each re-enactment.

José Zayas moved into in the Lathrop Homes in the early 1950s and made lots of strong connections with his neighbors as he grew up, he said. Zayas said neglecting to renovate buildings “puts the surrounding community at risk” and “puts the city at risk of losing millions of dollars having these buildings rehabbed.”

“When I look at Mary and Joseph and baby Jesus, I see homeless people,” Zayas told the crowd. “It’s shameful. I work in many neighborhoods around the city and see people living under viaducts. We have the resources to turn that around. We need to hold our public officials accountable, and they need to do more in terms of bringing affordable housing to Chicago.”

Barbara Burns, who grew up in the public housing community, said Chicago’s Housing Authority has repurposed land that could be used for affordable housing for other amenities, such as a multi-million dollar soccer field.

“At one time, CHA wanted to take all of this down and put up all market-rate stuff. That just isn’t right,” Burns said. “So, it’s important that we’re out here today and we let people know that we want CHA to keep their promises.” 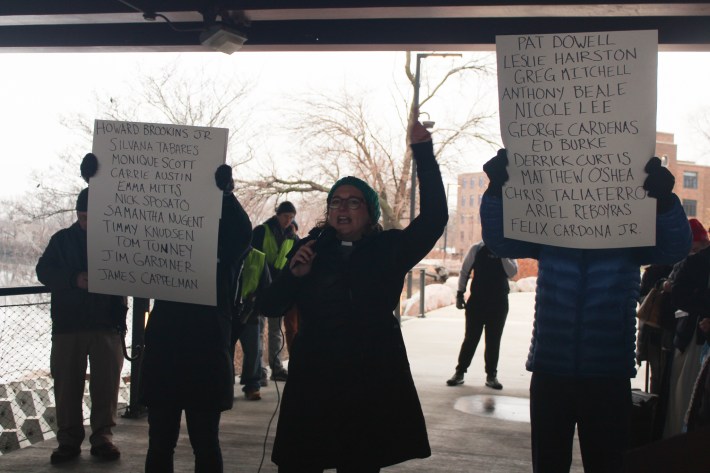 Credit: Kayleigh Padar//Block Club ChicagoLindsey Joyce, a pastor at Grace United Methodist Church in Logan Square, called out alderpeople who refused to attend a meeting to discuss homelessness in the city.

Although the Logan Square Ecumenical Alliance is especially focused on ensuring Lathrop Homes is rehabilitated to offer more public housing, its organizers hope more will be done to address homelessness throughout the city.

Joyce led the group in blasting city officials who skipped a meeting last month to consider an ordinance that would have provided more funding for public housing and other resources to minimize homelessness.

“Any human being who doesn’t have a house is not just a policy failure, but a moral failure,” Joyce said. “My tradition, my faith tells me that when you see moral failures of that magnitude, you fight to make it right.”