High-powered semi-automatic rifles such as those that have been used in mass killings across the country would be outlawed in many cases in Illinois, and people who currently own such weapons would have to register to keep them under a Democratic proposal filed in the Illinois House this week.

Illinois also would ban certain semi-automatic pistols and prohibit other gun accessories, such as high-capacity magazines – classified as those holding more than 10 rounds – under the measure.

Additionally, Illinois would would raise the length of firearm restraining orders from six months to one year,and people younger than 21 no longer would be allowed to obtain an Illinois firearm owner’s identification card with the sponsorship of a parent or guardian, among other things.

Currently, a person must be 21 to obtain a FOID card or have written consent from a parent or legal guardian.

“It’s time for Illinois to ban assault weapons. Today, we’re taking a big step toward that goal by introducing HB 5855, or the #ProtectILCommunitiesAct to #ProtectIllinoisCommunities,” state Rep. Bob Morgan, a Deerfield Democrat, said in a tweet. “Since the 7/4 mass shooting, I’ve spent months meeting with victims, policy experts, community leaders and more. Thanks to their feedback and perspectives, I’m confident that this comprehensive approach gets at the root of the gun violence epidemic and will save lives.”

The Democratic proposal, filed on the last day of the Illinois General Assembly’s fall veto session, could not be acted on until lawmakers return to the Capitol in January.

Under Morgan’s proposal, the sale of assault weapons and high-powered semi-automatic rifles would be prohibited in Illinois. Gun owners who currently own such weapons would be allowed to keep them but would have to register them within 300 days and pay a $25 fee. They could only transfer the weapons to an heir, someone who lives and will keep it out of state or a federally licensed firearms dealer.

It would not apply to law enforcement, military personnel and certain other security personnel.

The proposal follows a recent flurry of mass shootings, including one in Highland Park at a Fourth of July parade and two within the same week at a Virginia Walmart and a gay nightclub in Colorado that closed out November. In May, 21 people, mostly children, were killed during a school shooting in Uvalde, Texas.

After the shooting at Club Q in Colorado Springs, in which five people were killed, President Joe Biden called for the country to enact “an assault weapons ban to get weapons of war off America’s streets.”

“The idea we still allow semi-automatic weapons to be purchased is sick. Just sick,” Biden said on Thanksgiving Day. “I’m going to try to get rid of assault weapons.”

Nevertheless, the notion of restricting the type of weapons that have been involved in the mass killings has been met with resistance among gun rights advocates.

Across Illinois, gun aficionados, organizations and businesses contacted by Shaw Local News Network this week were not happy with the latest proposal in Springfield that would further tighten restrictions on guns across Illinois.

It’s time for Illinois to ban assault weapons. Today, we’re taking a big step toward that goal by introducing HB 5855, or the #ProtectILCommunitiesAct to #ProtectIllinoisCommunities (1/2)

Bert Irslinger, owner of Second Amendment Sports in McHenry, said he’s not opposed to gun control in general. Some controls are needed to protect both his business and the community of gun owners.

Irslinger, however, said he doesn’t think what is being proposed would help any of the ongoing issues with gun violence. He pointed to a number of existing laws that he doesn’t think are being enforced as strictly as they should be. 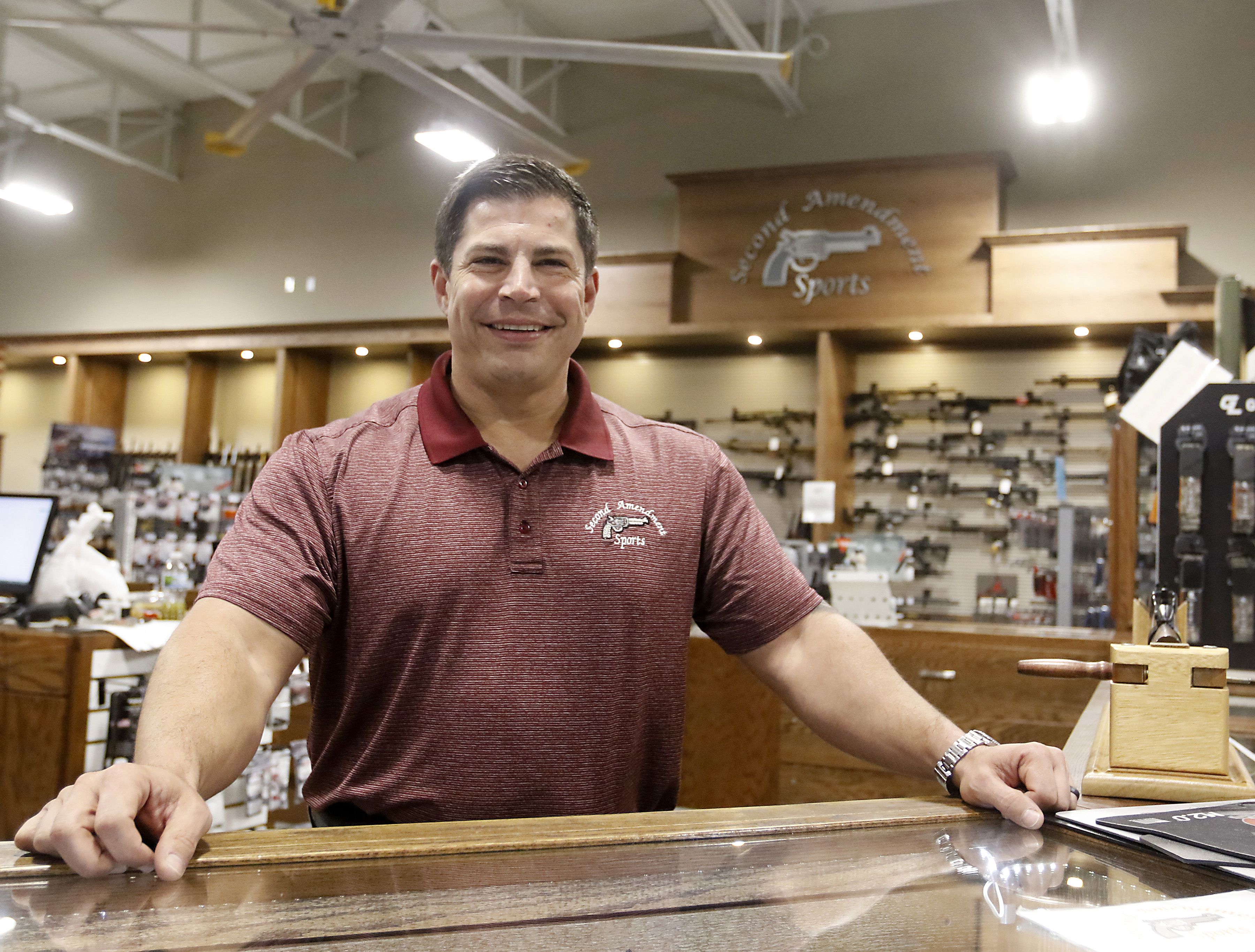 Bert Irslinger, the general manager of Second Amendment Sports, inside the gun shop in McHenry, on Thursday, Dec. 1, 2022. Democrats in the state Legislature unveiled a plan that would immediately outlaw the sale of assault weapons and prevent most residents under 21 from legally buying a gun. (Gregory Shaver — gshaver@shawmedia.com/)

He said he views the proposal as more regulation that will hurt law-abiding gun owners without addressing the underlying problem of people obtaining guns illegally. He also pointed to mental health as a problem that needs more attention.

“There are already a lot of rules and regulations associated with guns in Illinois,” Irslinger said. “These don’t address public safety at the root of the [issue].”

Jeff Regmier, owner of Kee Firearms and Training in New Lenox, said people already can’t buy military-grade assault weapons at his store and noted that “an AR-15 or an AK is not necessarily an assault weapon.”

He said the weapons he sells do not have the same modifications as those the military issues.

“These regulations are already in place,” he said.

Regmier said he doesn’t believe the proposal would do much to stop crime and called for more help addressing mental illness.

“Banning assault weapons is not going to solve any crime in Chicagoland,” Regmier said.

Ed Branch has been a sales associate at Rigler’s Sporting Goods in Rock Falls for 21 of the more than 50 years it has been in business. Like many other gun dealers, Branch also takes issue with the term “assault rifle” and noted that’s not allowed under federal law.

Gun dealers don’t want to see the kind of gun violence being perpetrated with the weapons they sell, but the solutions need to be “common sense,” he said. 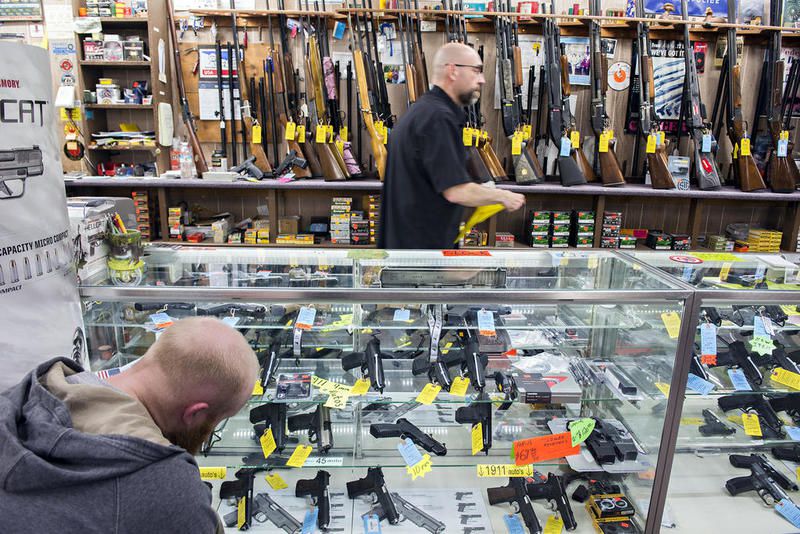 Ed Branch, shown here in a Shaw Media file photo, has been a sales associate at Rigler’s Sporting Goods in Rock Falls for 21 years of the more than 50 years the store has been in business. He is opposed to the changes proposed in a measure filed in the Illinois General Assembly that would ban high-powered semi-automatic weapons. (Alex Paschal/Dixon)

Many hunters use AR-15 weapons, and such guns are among his shop’s biggest sellers. Gun dealers would lose “a chunk” of their business if they no longer could sell them, he said.

Branch said he also finds the provision to raise the FOID age to 21 “nonsense.”

“You can drive a car at 16. You can vote at 18. You can go to war when you’re 18, so I don’t believe in that, either,” Branch said regarding the proposed age requirement. “It’s all politics. They’re going to use anything that has to do with a firearm to make political gains.”

Meanwhile, Illinois State Rifle Association Director Richard Pearson called the proposal an “overreach” and said he and others plan to fight it “every inch of the way.”

Pearson said gun control measures in general only serve to take firearms away from law-abiding citizens but not criminals. Like Irslinger, he said existing gun laws are not being enforced properly.

Kane County Sheriff Ron Hain said he doesn’t believe the new laws will have any effect on gun violence. He said the correct approach is to invest in local correctional centers, quality mental health resources and “those who actually do the work that make a difference; then you’ll see change.”

“Those who wish to do harm will find a means,” he said. “It is all about supporting mental health resources and good law enforcement tactics to prevent gun violence, along with ‘see something, say something.’ ”

Some other statewide organizations said they support the legislation.

In a statement, Michael Ziri, director of Public Policy at Equality Illinois, called the bill “a common-sense legislative package that would curtail gun violence and enhance public safety.” He said the LGBTQ community still is “reeling” from the Club Q shooting.

The U.S. Department of Homeland Security issued an updated Terrorism Advisory System bulletin for members of the LGBTQ community, along with public gatherings, faith-based institutions, schools, racial and religious minorities, government facilities, the media and perceived ideological opponents. It is the seventh advisory issued since January 2021 and replaces the bulletin that expired Wednesday.

“LGBTQ+ people in our country and our state are not as safe as we deserve to be,” Ziri said. “While we recognize that legislative negotiations will continue, we urge the Illinois General Assembly and Gov. [JB] Pritzker to take decisive and expeditious action in the lame-duck session to save lives and advance public safety for all Illinoisans, including LGBTQ+ people.”

Democratic state Rep. Suzanne Ness said she had not yet seen the complete bill and declined to comment on most of its provisions. But Ness said she would support a ban on assault weapons and said it was something constituents brought up to her on the campaign trail.

“Constituents care about that, and they want to see some action on limiting those kinds of weapons,” Ness said.

Ness also said the state needs to curb the flow of guns illegally entering Illinois from other states. She would like to see a task force set up to help address that issue.

“As a state, we’ve done a good job of putting some protective measures around who has guns and how they’re managed,” she said. “But none of it matters if we have a flood of weapons coming in illegally.”

“And this is a great start,” McHugh said. “We commend state Sen. Bob Morgan, who is leading this, and Rep. Maura Hirschauer and everybody else who is backing this, pushing this forward.”

At Second Amendment Sports, which sells all types of legal firearms, including handguns, shotguns, rifles and revolvers, there typically is a spike in business when conversations surrounding regulation start to take place, Irslinger said.

Those new purchases also can be targeted depending on what is being proposed. A law that might grandfather in certain guns, for example, could result in a spike of those types of firearms being purchased.

“You’d probably see a spike in sports cars being bought if, on Jan. 1, the government was going to ban cars that went faster than 55 mph,” Irslinger said.

Still, he said the increase in age to obtain a FOID card could affect his business negatively‚ but most of his customers are older than 21, so it won’t make up a huge loss.

He gave examples of high school and college shooting clubs, people getting into hunting or younger people shooting competitively. He said they wouldn’t be able to acquire those guns now.

Pearson said he expects the legislation to hurt the gun industry, noting the legislation is an attempt to “choke off every aspect of firearm ownership,” as well as stigmatize those who own them.

Ness disagreed with comments such as Pearson’s. She said she thinks those who want to continue owning guns legally need to be part of the solution in preventing guns from falling into the wrong hands.

“If people want to own guns with less restrictions, then they better find a way to manage the flow of guns that get into the hands of the wrong people,” she said. “We don’t get to have a lot of those discussions because they’re critical of any measure, anything done to try to restrict the use of guns.”