ROGERS PARK — Joseph Walker was living in a tent in Touhy Park since the summer when, “by the grace of God,” he found an apartment this month.

The apartment, however, is “naked.” It does not yet have any furniture or supplies with which to cook and eat, Walker said. So on Wednesdays, Walker heads over to Touhy Park, where he knows he can have a warm meal served up by fellow Rogers Park neighbors.

“I’ve experienced a lot of kindness,” Walker said between bites of chili and lasagna. “It’s very cool that people would do these acts. Anything that anybody does, every little thing, I consider a blessing.”

For over a year, Rogers Park neighbors have joined together to offer a weekly meal of chili to the dozens living in tents inside Touhy Park, 7348 N. Paulina St. 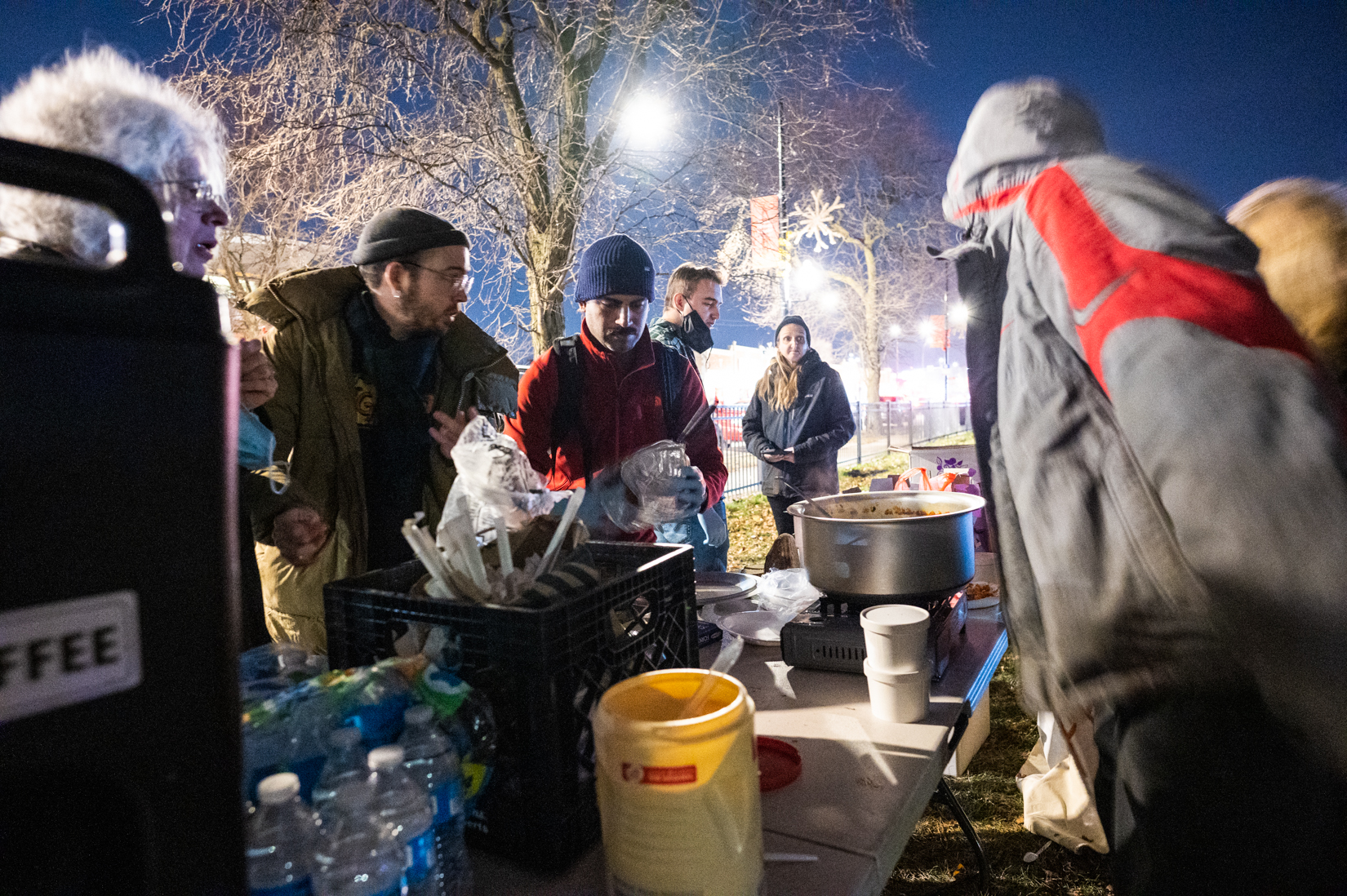 The idea for a weekly chili night was sparked by Ahmed Chaudhry, who lives near Touhy Park with wife Dorian Ortega and their 10-month-old.

Chaudhry started last summer, often bringing up a pot of chili and some serving supplies to those in the park by himself. Spending more time in Touhy Park, Chaudhry got to know the other neighbors offering aid to the unhoused, including those with the activist group Rogers Park Food Not Bombs.

Chaudhry’s family and Food Not Bombs then joined forces along with other neighbors to offer a weekly chili and resource distribution night at the park. The housed and unhoused come together over a home-cooked meal.

“When it comes to helping people, this is low hanging fruit,” Chaudhry said. “I mean, we’re all neighbors.” 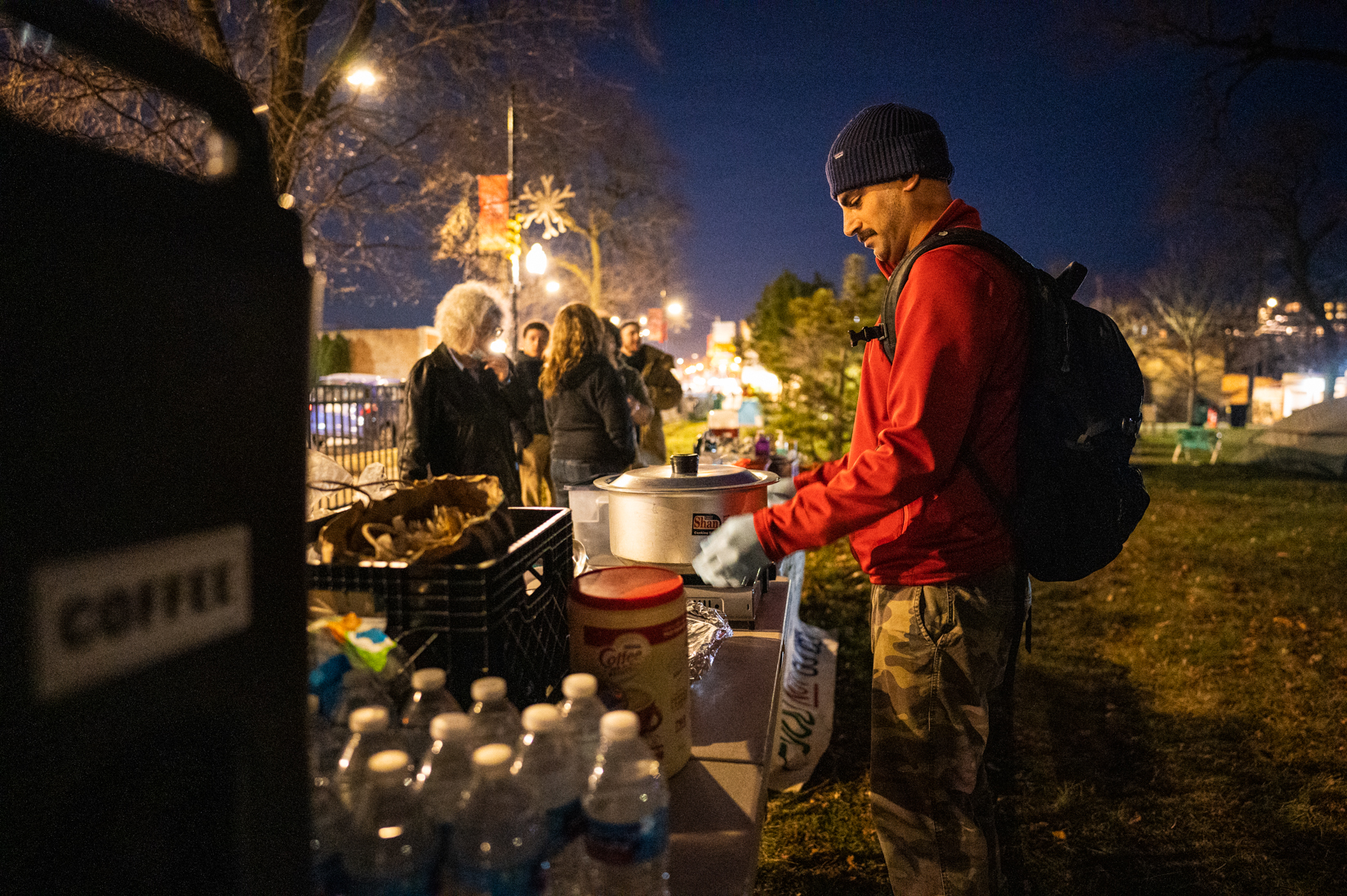 For nearly two years, a tent city has occupied a portion of Touhy Park.

The number of people living in the park has ebbed and flowed. The encampment has persisted despite three “moving events” held by the city, including one last week, that have found housing for 84 tent city residents, officials said. Touhy Park’s encampment overlaps with an increase in homelessness caused in part by the pandemic.

The tent city’s existence has been a major point of contention among neighbors, leading to fights on social media and dominating conversation in town halls and meetings over a proposed homeless shelter in Rogers Park.

As the encampment’s numbers swelled this summer, the Chicago Park District relocated its summer day camp from Touhy Park and eventually closed the park’s field house. Those living in the camp have also been the victims of a cruel prank when they were served fake eviction notices claiming they would be moved to a swanky Downtown hotel.

The debate surrounding the tent city is what partially caused Chaudhry to get involved in helping those living in the park, he said.

“I just felt the humanity was lost,” said Chaudhry, 34. “It irked me that there was so much condescension.”

So Chaudhry decided to turn a family tradition into a force for good. His wife, Ortega, would make chili on a weekly basis, often tinkering with the recipe with Chaudhry acting as a taste tester.

The couple decided to start making more chili and sharing it with those in the park. They still have fun with it, trying different recipes and asking the park inhabitants for feedback, they said.

On Wednesday, Ortega prepared a “three sisters chili” that uses ingredients regularly planted and harvested by Native Americans in honor of Indigenous Peoples Day, she said.

“I’ve never cooked for so many people, ever,” Ortega said. “Just doing something felt very natural to us. We live right here. How can you not do something?” 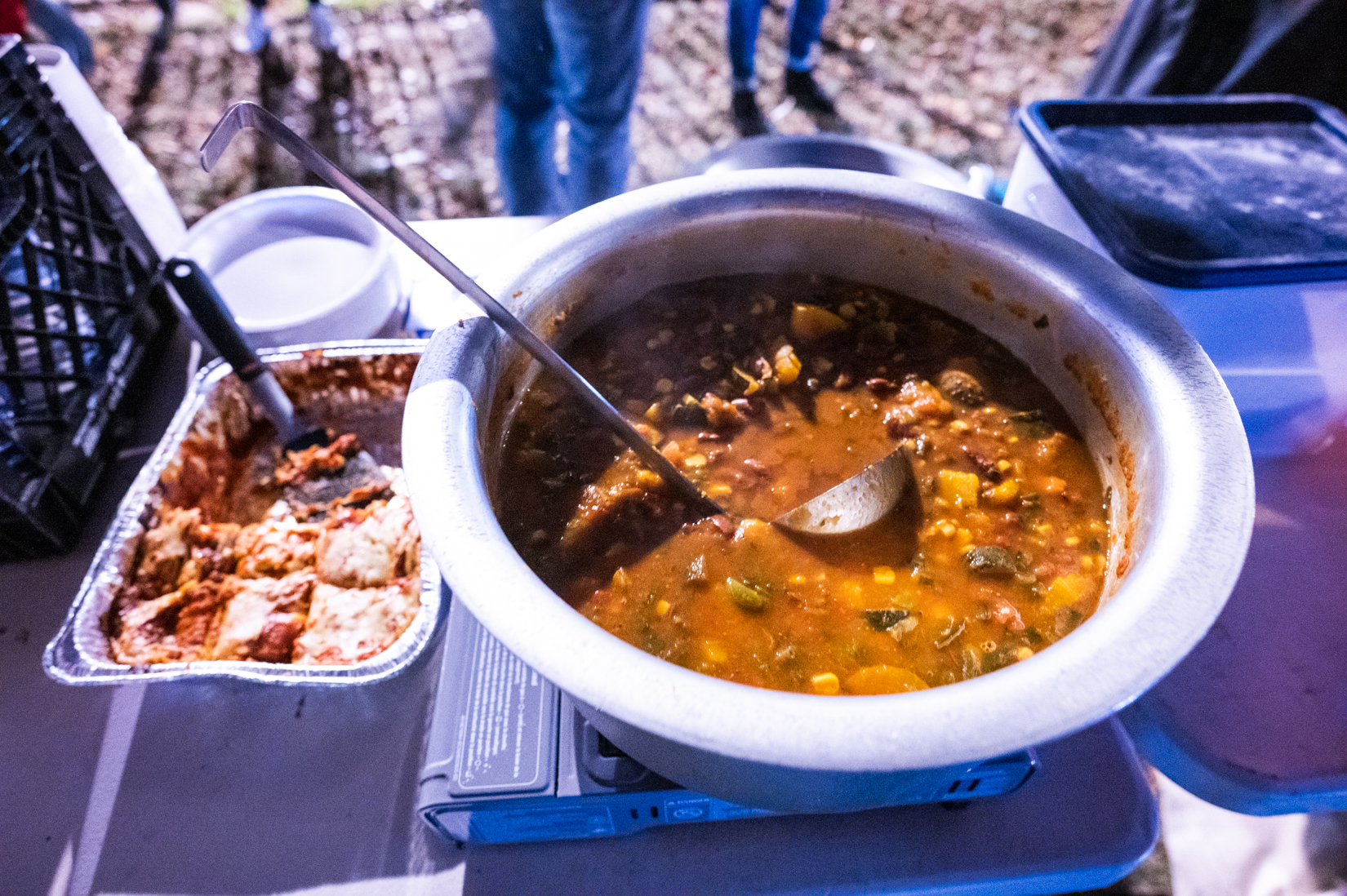 Credit: Colin Boyle/Block Club ChicagoChili and lasagna are ready to be served at Touhy Park in Rogers Park as volunteers serve at night on Nov. 23, 2022.

At first, Chaudhry would come to the park alone, setting his large pot of chili on a park bench. He then met the organizers with Rogers Park Food Not Bombs, who offered him table space at their weekly food and resource distribution.

Food Not Bombs, which organizes around issues of food insecurity and social justice, has been providing mutual aid to the Touhy Park residents for as long as the encampment has existed, said volunteer Gerardo Marciano.

The distribution events started sparingly, but as the camp grew, the group also sought to grow its aid efforts. Those efforts were aided by other neighbors looking to help out, Marciano said.

“We saw the need for people have more regular food [assistance],” they said. “We’ve seen a big increase in people helping, bringing food. Many just do it on their own.”

On Wednesday night, Food Not Bombs set up multiple folding tables at the tent city for the meal and resource distribution.

Chaudhry used one of the tables for his pot of chili and camping stovetop. Food Not Bombs brought a tray of lasagna and one member brought up loaves of homemade bread. They also brought up boxes of produce to hand out.

Food Not Bombs also provided hand warmers, hygiene products like tooth brushes and harm reduction supplies including the opioid overdose antidote Narcan, hypodermic needles and and a hazardous waste basket to collect used needles that may otherwise litter the park. 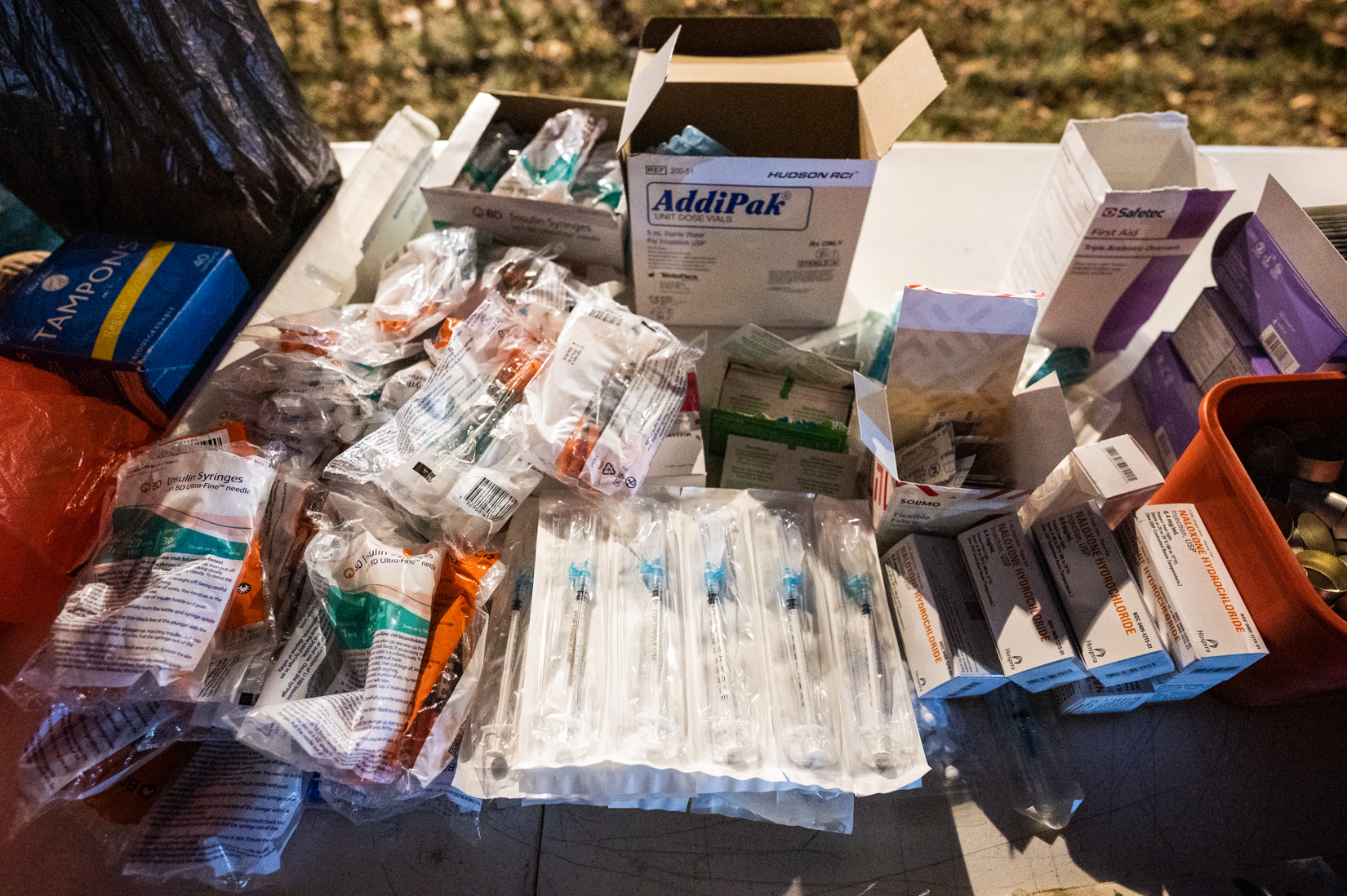 Credit: Colin Boyle/Block Club ChicagoHealth supplies are ready for the unhoused community at Touhy Park in Rogers Park as volunteers serve chili and supplies at night on Nov. 23, 2022.

In the parking lot just north of Touhy Park, a family of Bosnian immigrants set up outside their SUV, a trunk full of supplies to hand out.

Sadil and Alma Mujanovic, who formed the aid group “Help From USA to BIH (Boznia and Herzegovina)” regularly hand out blankets, jackets and pillows at Touhy Park on Wednesdays. The family comes by on weekends with food. Devon Market is one of the family’s partners, providing donations that the family distributes.

“We want to teach our kids that giving is actually getting,” Alma Mujanovic said. “You have it in you? Then you do it. We wish we could do more.” 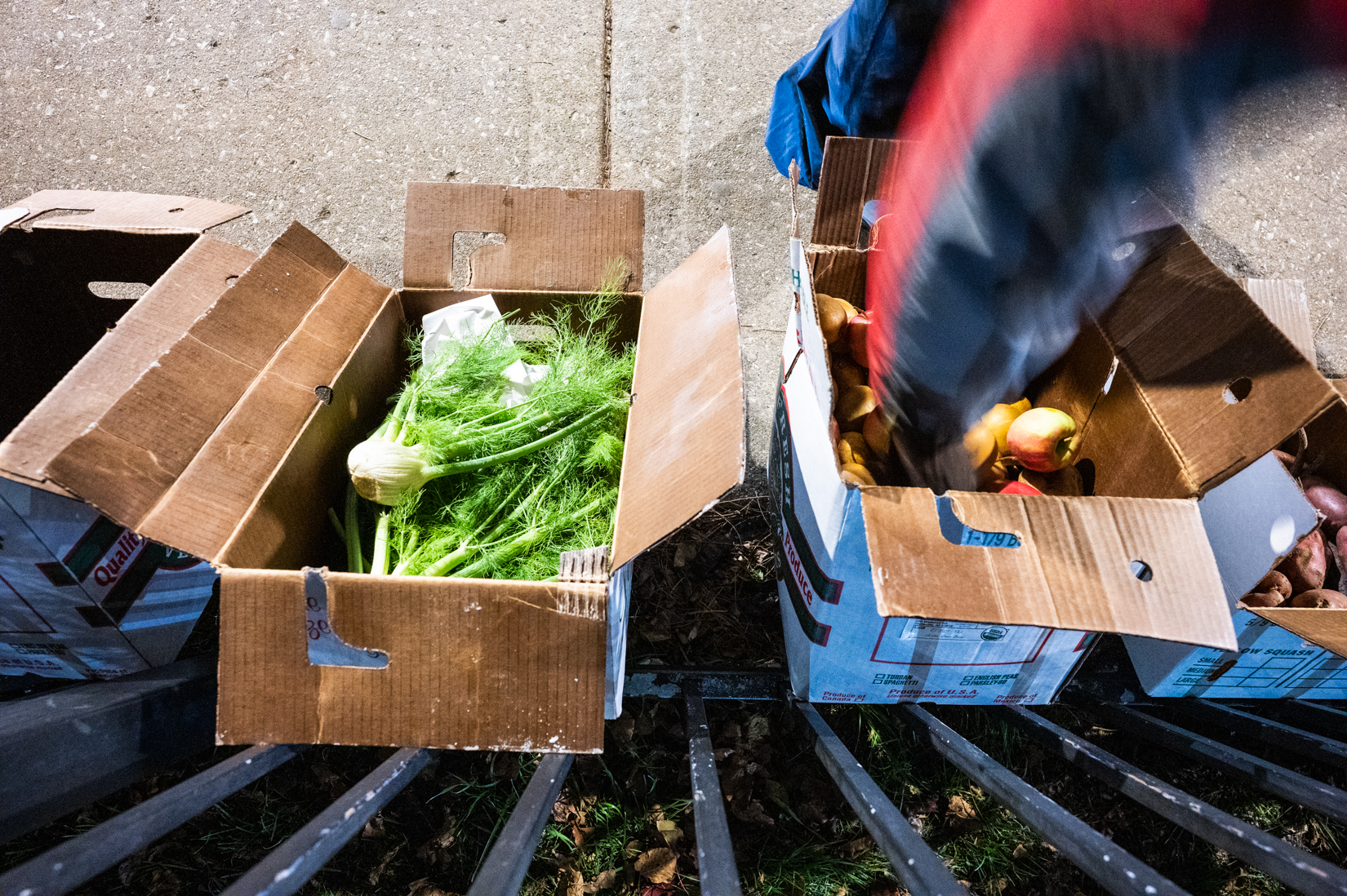 Chaudhry has posted about chili night on Rogers Park Facebook pages, which has led other neighbors to get involved. A few neighbors send monetary donations while one neighbor makes homemade cornbread to go with the chili, he said.

An average chili night can serve about 30-50 people. Some who come for the meal, like Walker, don’t live in the park but could use the help regardless, neighbors said.

Wednesday’s chili night came on an unusually balmy late November day. But winter is nearly here. That has led to some urgency in addressing the situation at Touhy Park.

Last week, the city’s Department of Family and Support Services conducted a “rapid rehousing event” at Touhy Park. Twenty residents of the tent city were matched with housing, according to Ald. Maria Hadden (49th). Others were brought to an emergency shelter to temporarily get out of the cold.

While 84 residents of the park have been matched with housing, new people continue to arrive, Hadden said in a video statement from the housing event. Housing events will continue to take place as city officials grapple with how to handle the encampment and eventually restore park programming, Hadden said.

While city officials debate policy on addressing homelessness, Rogers Park neighbors like Chaudhry will continue to help out in any way they can.

“As long as people are here, I’ll have chili for them,” he said. 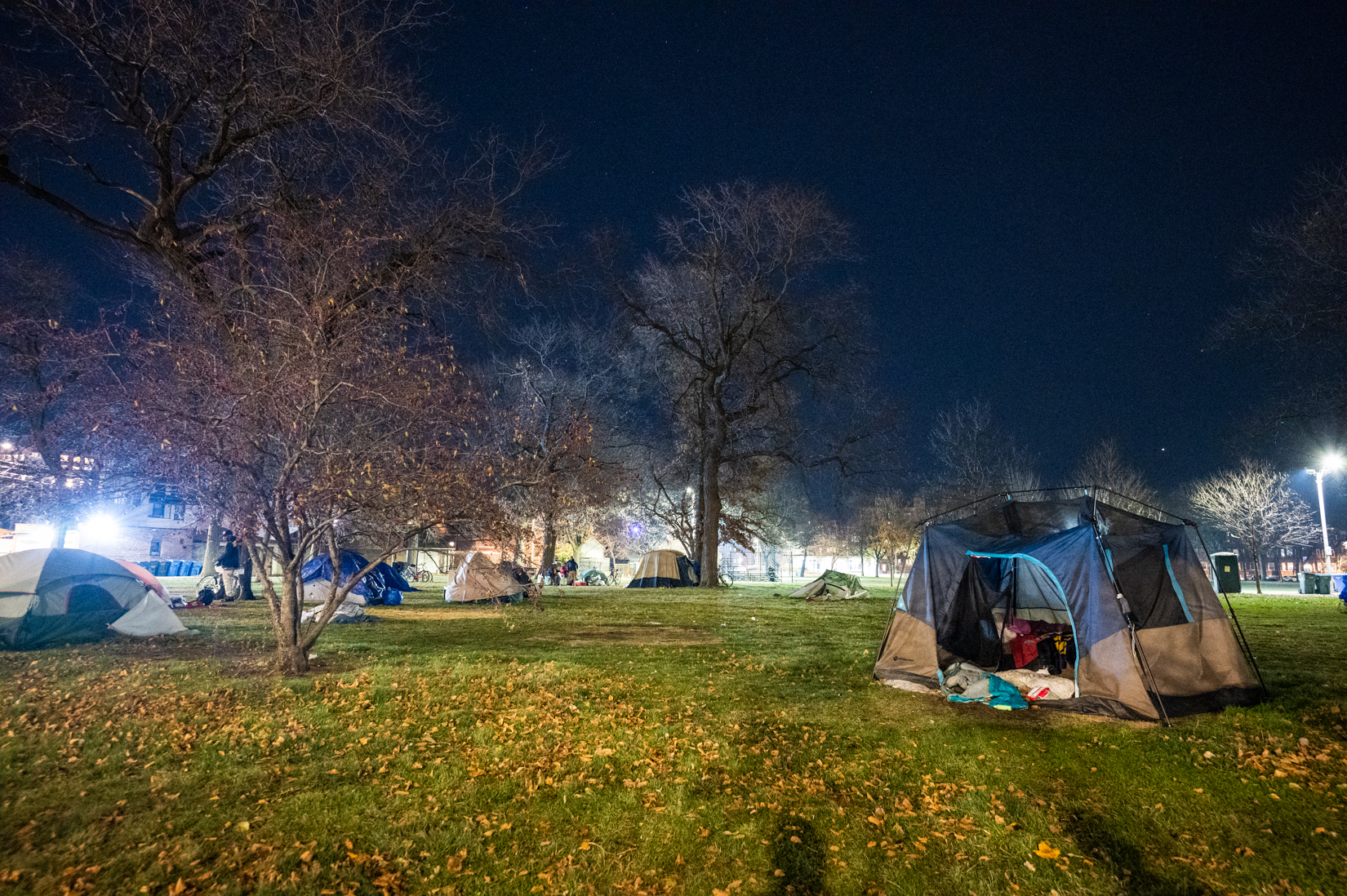