CHICAGO — Chicagoans will not get to vote on a proposal to combat homelessness in Chicago after half of the city’s alderpeople failed to show up to a special meeting Monday on the measure.

Introduced in 2018, the Bring Chicago Home ordinance calls for hiking the city’s real transfer taxes on sales of properties worth $1 million or more to fund homelessness services in the city, including permanent and temporary affordable housing for a growing number of unhoused Chicagoans. It was crafted by the Chicago Coalition for the Homeless.

A group of alderpeople advocating for the ordinance called a special meeting Monday to push the legislation forward, but their efforts were stymied.

The original meeting, set for 9 a.m., was called off after City Council failed to meet quorum, with only 14 members present. Mayor Lori Lightfoot swiftly moved to adjourn the meeting.

An attempt to hold the meeting two-and-a-half hours later — driven by Alds. Maria Hadden (49th) and Carlos Ramirez-Rosa (35th) who championed the ordinance — also failed. Lightfoot wasn’t present for that meeting, which was just one member short of quorum, with 25 alderpeople present.

The canceled meeting means the ordinance will not appear on the Feb. 28 ballot when Chicagoans vote for mayor and alderpeople.

“I’m really frustrated and angry with some of my colleagues who chose not to show up,” said Ald. Daniel La Spata (1st), who also supported the ordinance. “Some of those colleagues were in the hall; they were in the building. Some walked into the council chambers immediately afterward.”

Supporters of the ordinance have said about 12,000 families could be housed within 10 years by boosting the city’s transfer tax from 0.75 percent to 2.65 percent for the priciest real estate deals.

Lightfoot initially supported a transfer tax hike and even pushed for the plan at the state level in 2020, but has since opposed the effort after struggling to win support from state lawmakers and receiving federal pandemic funding to combat the issue, WTTW reported.

“No matter what, it is going to be spun as a property tax increase,” Lightfoot told WTTW.

Lightfoot’s Chicago Recovery Plan included $116 million for homelessness support services — but the mayor only spent $18.7 million on such services last year, according to WTTW.

With the special City Council meeting, proponents of the ordinance were looking to drum up enough support to place a referendum on the ballot for the February municipal election. If voters approved, the city could then pass an ordinance increasing the transfer tax.

Supporters said the halted meeting is a major blow for the ordinance, which aims to help the city’s most vulnerable residents at a time when the homelessness crisis is ballooning. 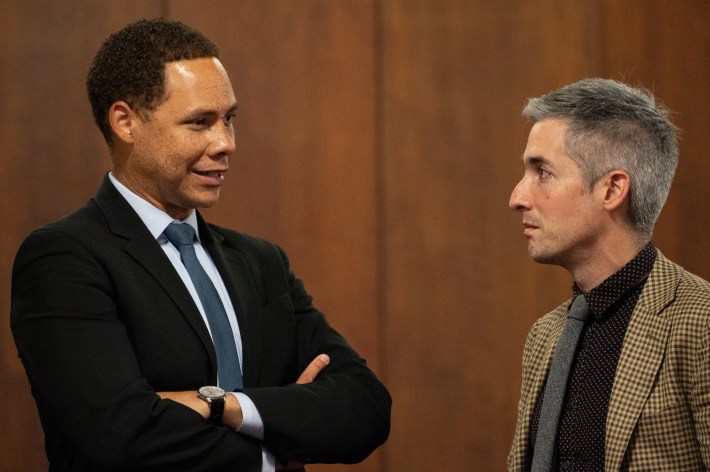 “Even if someone says we’ll get to it in a year or two, for folks who are living doubled up, folks who are living outside, that’s just not a good enough answer in my opinion,” said Ald. Matt Martin (47th). “We needed to hear from the public today about this critical issue.”

It’s frustrating some council members were unwilling to even debate the legislation, proponents said.

“We need to show up and have debates around these issues. That doesn’t mean we’re going to always agree. … We do things like pass a $16 billion budget where not everyone’s in agreement and that’s OK,” Martin said.

Carla Johnson, a leader with the Bring Chicago Home campaign, echoed that sentiment.

“Whether Alders support the content of the proposal or not, the coalition invites an open and honest dialogue about our proposal. At a bare minimum, this is what the job requires — show up,” Johnson said in a news release.

La Spata called the outcome “profoundly disappointing” in a tweet. He said some council members who attended the Finance Committee hearing down the hall before the special meeting “either stayed in the hall or walked in the other direction rather than coming” to the chambers.

“We were at 25 present and 25 absent for that meeting. Any one person could’ve walked in the room and voted present and we could’ve had a debate,” La Spata said.

Some alderpeople who were absent Monday are allies of the mayor, who opposes the ordinance.

La Spata and the others pushing for the ordinance said they’re not giving up despite Monday’s setback. Martin said they’re prepared to bring the ordinance back to the City Council next term. Supporters chanted “We’ll be back” after the meeting was adjourned.

“Today’s a hard day day; today’s a frustrating day; it’s a sad one,” Martin said. “My job doesn’t stop after a frustrating day. I have a job to do for the remainder of the term. I’m going to dust myself off and get back to work and hope that myself and other supporters can ultimately get a majority of the City Council to support this. We’re just going to need more time, which is disappointing.”