García is expected to announce his mayoral campaign Thursday, which would be the 40-year anniversary of former Mayor Harold Washington’s campaign announcement, according to NBC reporter Mary Ann Ahern.

García told reporters in September he was considering running for mayor but he said he was hesitant to give up his role as a congressman. He’s campaigning to retain his seat in Tuesday’s election.

García told the Sun-Times’ Fran Spielman last week he would only run for mayor if Democrats lose control of the U.S. House of Representatives.

“In all seriousness, I am conflicted because of the responsibility that I have to help save and protect our democracy and our republic,” García said in September. “The threat against our democracy remains so violent. We’ve been hanging by a thread for the past year now or so. So I’m conflicted.” 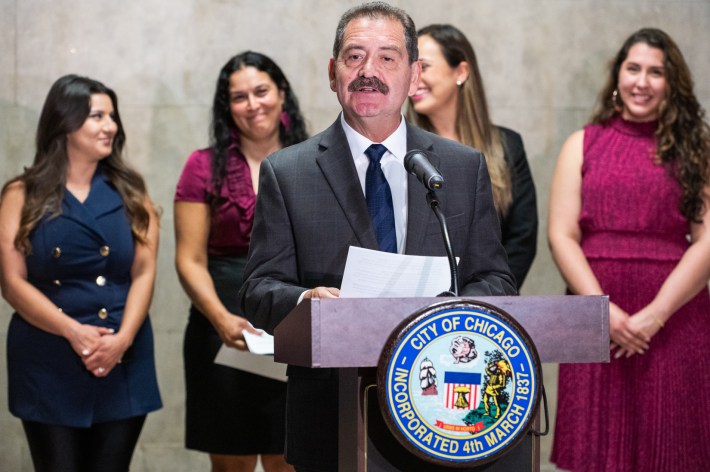 If García were to run for mayor, he could pose a serious threat to Mayor Lori Lightfoot’s reelection due to his name recognition and decades of political experience.

In 2015, García ran against former Mayor Rahm Emanuel with an endorsement from Sen. Bernie Sanders and became the first candidate to push a sitting mayor into a runoff. He lost the election with 44.5 percent of the vote to Emanuel’s 55.5 percent.

García didn’t run for mayor again in 2019 and endorsed Lightfoot, despite encouragement from Rep. Luis Gutiérrez and others.

The Latino Leadership Council has been “working hard behind the scenes to encourage” García to run for mayor, spokesperson Alejandra Moran said.

Efforts to raise money for García unannounced campaign are underway, according to the Tribune’s Gregory Pratt.

García was born in Mexico and moved to the United States in 1965, where he lived with his family in Little Village. García has advocated for Latino Americans, pushed for immigration reforms and pushed for other progressive policies throughout his life.

When García wasn’t in office, he led the Little Village Community Development Corporation, now known as Enlace. The group remains active and is focused on empowering Little Village residents “to confront systemic inequities and barriers to economic and social access,” according to its website.

García served on the Cook County Board of Commissioners 2011-2018. In 2019, he was elected to represent parts of Chicago and the suburbs in Illinois’ 4th District in the House of Representatives.

Longtime Lightfoot ally Ald. Tom Tunney (44th), who is stepping down from City Council next year, also is rumored as a potential challenger but has not announced a bid.