Arizona’s model of “school choice” and voucher systems is something state Rep. Steve Reick, R-Woodstock, would like to see Illinois move towards if possible.

Reick, who is running for reelection for House District 63, is being challenged by a former teacher and Crystal Lake resident Brian Meyers, who said he not only supports robust public school funding, but argued that allowing charter and private schools to compete with the public education system has proven to be a disaster.

Education has become an important issue in this year’s election cycle, in part because gubernatorial candidate Darren Bailey, who is running against Democratic incumbent Gov. JB Pritzker, suggested significant cuts to public education, as well as lingering concerns from the pandemic and questions about what kind of sex education is appropriate for school curriculums.

This is Meyers’ first time running to be a state representative or for any elected office; Reick is seeking his fourth term, having first entered office in 2017. 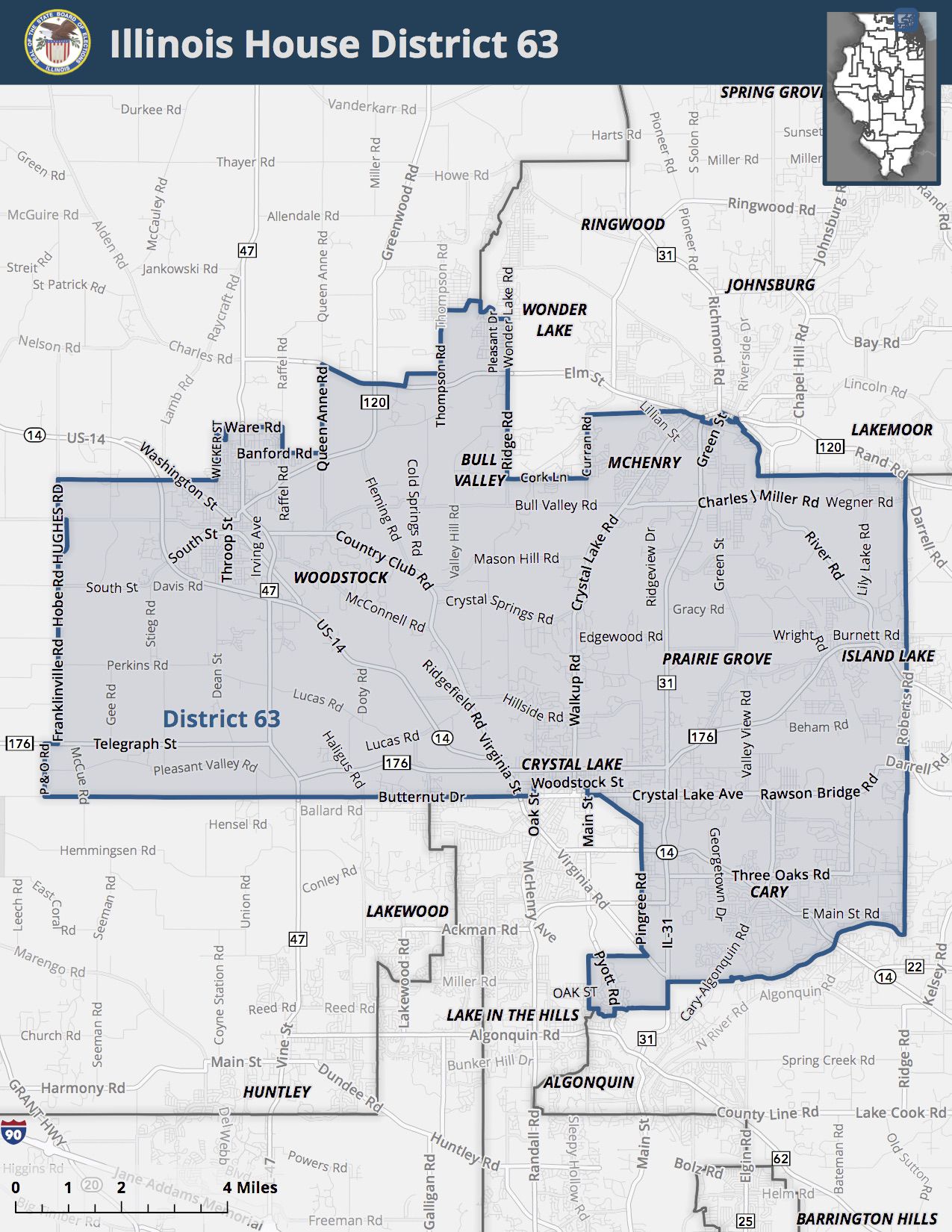 Illinois House District 63 encompasses a large central portion of McHenry County stretching from Woodstock to Island Lake, and includes large portions of Cary, Crystal Lake and McHenry. (Provided by the Illinois Board of Elections/)

Meyers, who spent 31 years as a Spanish and bilingual teacher in various school districts in the Midwest, used an education analogy to explain his philosophy on governing and campaigning, which he said applies to anyone, Republican or Democrat.

“In my teaching and coaching career, students and their parents would ask if their great attendance and doing all their work was not sufficient to earn a passing grade or an ‘A’,” Meyers said. “I would say that it is also important to listen and learn the lessons, to think. Remember also that this county is turning purple, if not blue, and the time when you could count on the ‘R’ next to your name and a silly billboard to carry you to election year after year has passed.”

Meyers criticized Republicans, including Reick for “not offering construction solutions to anything,” including inflation and public safety, during this election cycle.

“They are not doing their homework,” Meyers said.

Reick was equally critical of Democrats for “ignoring concerns that constituents actually have” like inflation and “pounding the drum on abortion, which is not on the ballot in this state.”

Reick offered a nuanced view of his role within the state legislature, acknowledging that even if he won reelection, Republicans would still be the minority but Reick would be among the senior members in the caucus.

“I’m probably looking at staying ‘in the same lane’ as my committee memberships are concerned,” Reick said, who is on five committees, including school curriculum policies and appropriations for elementary and secondary education.

Reick said his priority on schools was to bring test scores “back from the depths they fell during the pandemic,” adding he was a strong advocate of school choice.

“We’re in a state where ‘school choice’ is a ‘dirty word’ among people who control politics [in Illinois],” Reick said. “If we went back to a system of ‘pure choice,’ we would end up with better outcomes and lower costs.”

Reick also cited a high number of unfunded mandates that the legislature has passed along to school districts in recent years, which have resulted in raising local property taxes.

“If the state cannot pay for what it tells schools they have to do, then we have a problem,” Reick said.

The concept between increasing competition among schools is, in theory, that not only would private and charter schools lower the enrollment in public schools, and thus lead to lower budgets, but the nature of competition would mean districts would be forced to come up with the best solutions to induce higher performance.

Meyers agreed with Reick that there is a high property tax burden within school districts, but he felt various solutions, including consolidating districts and creating charter schools, ranged from “complicated” to outright terrible.

“We don’t need gimmicky charter schools,” Meyers said. “We need to actually live up to the commitments to fund public education and the educators who work in that sector. We have done everything we can possibly do in Illinois to not tax the people who can least afford to pay.”

Meyers said, in his experience, with districts subject to competition, inevitable “sheep stealing occurs,” where the best students are able to leave districts, leaving the district’s aggregate scores even worse. He said often schools outside the public education system don’t have to deal with major difficulties like providing services to students with learning or physical disabilities.

“We are not dealing with widgets,” Meyers said. “We are dealing with young persons. We can’t say, ‘Only produce the best widgets,’ and get rid of the rest of them.”