McLaughlin, a self described “numbers guy,” is finishing his first term after winning election in 2020, said he sees his role as calling out expense spending by the Democratic supermajority in Springfield. Morgan, by contrast, said she will fight to fund programs, including education.

Before becoming a state representative, McLaughlin was a pension fund manager and the village president of Barrington Hills for eight years. Morgan spent several decades working in various marketing and management positions for Motorola and later the Brightstar Corp., before she took a job as an administrative assistant in the curriculum office at Wauconda School District 118 in 2021.

District 52 runs from Volo in the north through Wauconda, Island Lake, Cary, Algonquin and Barrington Hills to South Barrington. 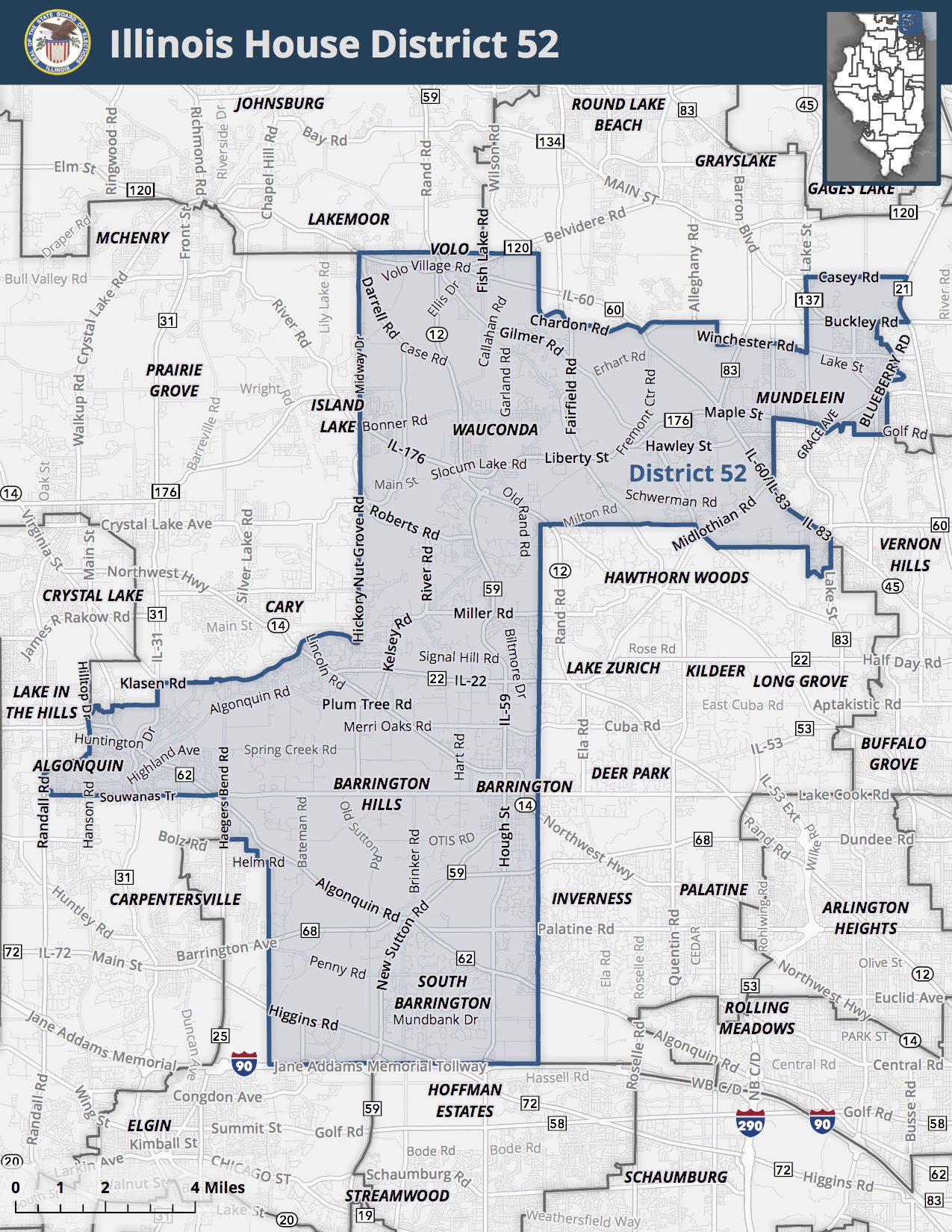 District 52 includes Island Lake, Cary and Algonquin and runs south to South Barrington. (Provided by the Illinois Board of Election/)

McLaughlin said he was realistic about his role in the statehouse and if he wins reelection, he would be in the minority party. As a result, McLaughlin framed his role as calling out budgetary issues and said Illinois residents are hurting from inflation and high property taxes.

“Springfield has a spending problem,” McLaughlin said, noting that Illinois is ranked last among states by Moody’s credit rating.

“They need outsiders like me to explain to them how debt and high property taxes hurt families,” McLaughlin said. “We won’t get government bailout money again. But we already spent that money in this year’s budget. Where is that money coming from in the next budget? Middle class taxpayers, unfortunately.”

While McLaughlin said most of the time that means generating public awareness of financial issues, McLaughlin said he’s proud of sponsoring House Bill 4772, which deals with design-build contracts – where a single contractor provides design and construction services – that could lower construction and engineering costs for county projects. It unanimously passed both the House and Senate and was signed into law in May.

“Doing that as a Republican in the supermajority Democrat chamber was not easy,” McLaughlin said. “It shows that I can get things done.”

While Morgan, who touts her own business acumen working in the wireless industry, agreed it was important for politicians to have some understanding of business principles, she doesn’t think that governments need to be run as a business.

“I respect the idea of balancing the state budget,” Morgan said. “I appreciate the idea of spending money we don’t have. Back in the [Gov. Bruce] Rauner era we threw money away. But we should not be cutting funds from schools anywhere. Even kids going to trade schools or the military need a solid educational foundation through high school.”

Morgan said she would need to take a more thorough look at the state’s budget for identifying specific possibilities for cutting expenditures.

McLaughlin didn’t say he would slash school funding specifically, and offered instead a top down approach to cutting the budget. Attempts to reach him for his thoughts on education funding were unsuccessful.

However, McLaughlin slammed new national and state education standards and said he’s talked to a lot of parents upset about the mandates.

He also called Pritzker’s handling of COVID-19 and schools “ridiculous,” saying “parents on both sides” remain upset about remote learning and that schools didn’t exert local authority to stay open.

Morgan, who has a sophomore and a recent graduate in Wauconda School District 118, said her time in the curriculum office has made her feel like public schools are being unfairly attacked by conservatives.

That also applies to the debate around how race is taught in schools and other curriculum fights, Morgan said, which she said become a proxy attack on funding or control of education overall.

“We have all these crazy stories of people coming in and attacking school boards because of these policies,” she said.

Although Morgan did not personally witness criticism from parents during school board meetings, several community members came into the curriculum office and asked to review material for inappropriate content, Morgan said, adding none was found.