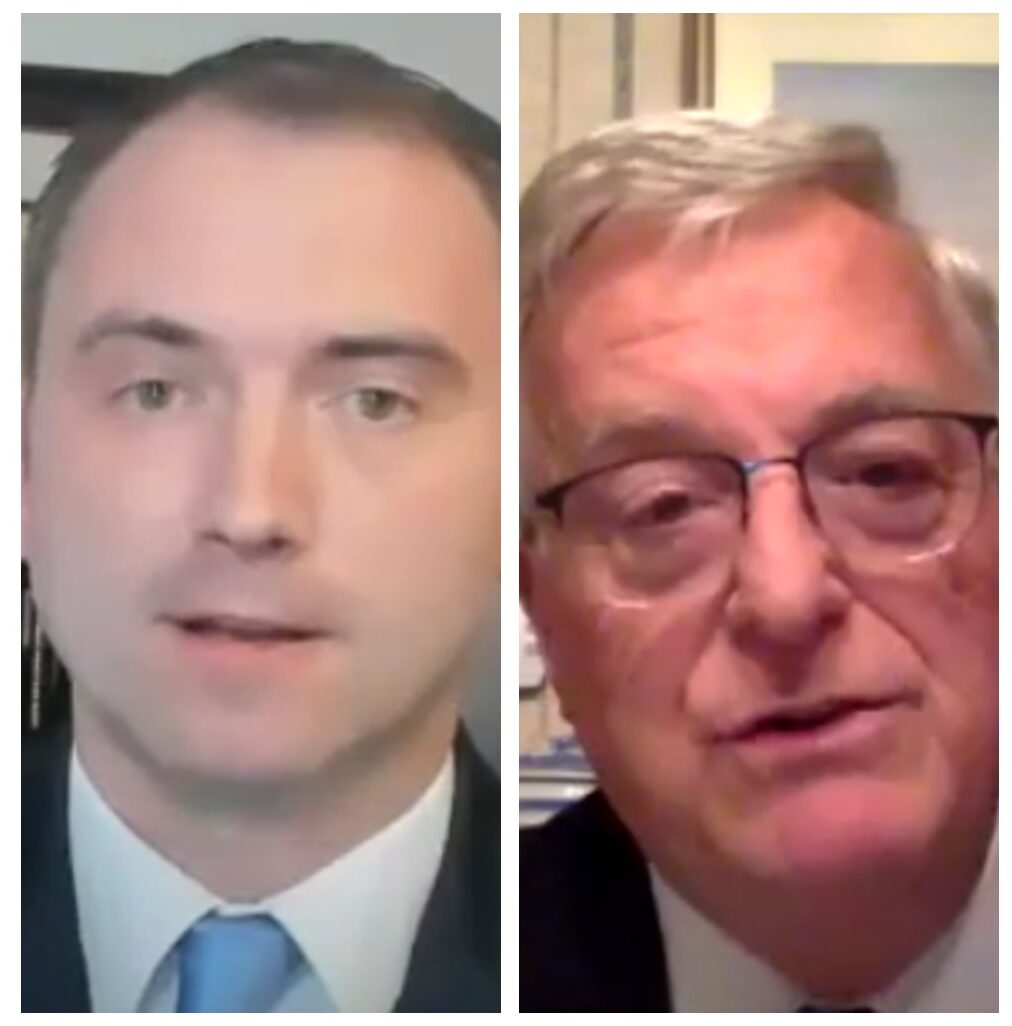 State Rep. Mark Walker (D-53rd) and his Republican opponent attorney Jack Vrett squared off in an hour-long League of Women Voters candidates forum via Zoom before an audience of about 50 on Wednesday, Oct. 19. Subjects discussed via questions sent in by audience members, and in advance of the forum, ranged from taxes and inflation to abortion in the context of religion, to gun violence, crime, the SAFE-T Act, to homelessness.

In summing up their positions in closing statements, Walker said he is proud of the progress Illinois has made in the last four years, saying there should be a focus on the state’s strengths. While Vrett said it is “clear, Illinois is on the wrong track” citing high taxes, over-regulation of small businesses, and people feeling unsafe in their neighborhoods.

The two candidates were mostly well-behaved during the forum, with Gaby only having to stop Walker once from interrupting Vrett.

On abortion, both Walker and Vrett said they were Catholics, but hold different stances on the issue.

Vrett said he is pro-life but also believes in limited government. He said he believes abortions should be made available to women in limited circumstances such as when there is abuse, when there are issues of consent, and when the life of the mother is at stake.

Vrett echoed GOP gubernatorial candidate Darren Bailey saying, “Dobbs (the Supreme Court decision overturning Roe vs. Wade and sending decisions on abortion back to the states), did not change anything in Illinois.”

Walker said he is pro-choice, not wanting the government to intrude on a woman’s decision.

Discussing gun violence, both Walker and Vrett harkened back to their experiences in the military. Both men were Army soldiers. Vrett served in Afghanistan and Walker in Vietnam.

Vrett said education about guns needs to be brought back to schools so students can learn to respect weapons and rules, such as keeping them under lock and key.

Walker said he saw what military weapons can do in Vietnam and said those weapons “have no place in our civil society.” He said the fact that gun violence is the top killer of young people in the United States is “disgraceful.”

When asked about residents leaving Illinois because of high taxes, Walker said he was part of a state task force to bring more transparency to the process when local taxing bodies go to referendum claiming to need more money than they are able to levy due to tax cap laws. He said other taxes are too high and that is something that needs to be fixed.

Vrett called the task force Walker was a part of “a sham” and claimed Walker supported tax increases and the failed state referendum to institute a graduated income tax, rather than the current flat tax, in Illinois. In opening and closing remarks and answering other questions, Vrett went back to the issue of high taxes in Illinois several times.

On the proposed Illinois Constitutional Workers Rights Amendment referendum question on the ballot, Walker said, similar to Illinois legislation protecting a woman’s right to an abortion, the workers’ rights amendment would “act as a backstop if federal legislation undercuts the NLRB (National Labor Relations Board).”

Vrett said much of his work as a private attorney is as a labor relations attorney. As a labor lawyer, Vrett said he does support unions, but said he opposes the proposed Workers Rights Amendment, “Because of the Supremacy Clause (in the U.S. Constitution) it can’t apply to the private sector.”

On the issue of homelessness, Vrett said it is often related to mental illness and said state, local, and federal officials need to come together to create a comprehensive package to help address the issue.

Walker said, “The homeless (in our area) are from here.” He said walking in local parks, he found many homeless veterans, including those who served in Vietnam as he did. Walker called for more affordable housing and more programming.

Walker also said he served on the board of Journeys: The Road Home, a Palatine-based organization that works to prevent homelessness in the North and Northwest suburbs.