The Pretrial Implementation Task Force, which was set up under the Illinois Supreme Court, has been holding sessions throughout the state regarding the Pretrial Fairness Act, which abolishes cash bail on Jan. 1. The measure was included in the Safety, Accountability, Fairness and Equity-Today, also known as the SAFE-T Act, that Illinois lawmakers passed in January 2021.

At the beginning of October, DeKalb County joined prosecutors across the state in filing a lawsuit seeking to block part of the SAFE-T Act.

DeKalb County State’s Attorney Rick Amato and Sheriff Andy Sullivan filed the lawsuit against Gov. JB Pritzker and Attorney General Kwame Raoul over the legislation that became law last year, according to court records. They argue the SAFE-T Act is unconstitutional, and it would be “chaotic” for residents if it takes effect as scheduled Jan. 1.

In a Supreme Court news release that announced the education seminar at NIU, retired Judge Robbin Stuckert, who chairs the Pretrial Implementation Task Force, said “the Task Force has worked tirelessly to ensure the implementation of the PFA [Pretrial Fairness Act] goes as smoothly as possible.”

“These education sessions will be open to justice system partners and community members all across Illinois and are intended to assist counties with the implementation process,” Stuckert said. A flow chart produced by the Illinois Supreme Court Pretrial Implementation Task Force shows how release by citation will work under the Pretrial Fairness Act. 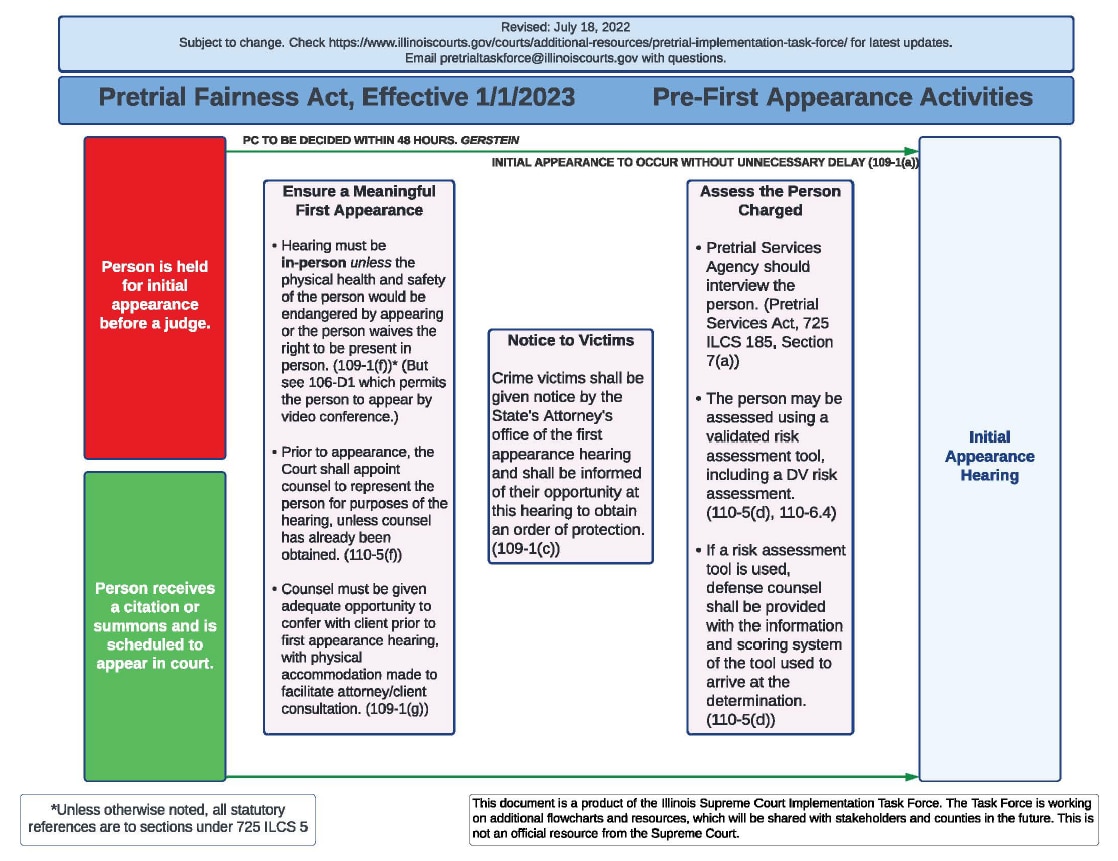 A Supreme Court Pretrial Implementation Task Force flowchart shows what will happen before a defendant’s first appearance in court.

The educational seminar —which is scheduled to go from 8:45 a.m. to 4:30 p.m. — will start with plenary presentations and a question and answer session on pretrial practices under the new law before transitioning to breakout discussion groups arranged based upon professional and community affiliations. The seminar will conclude with another plenary session that will consist of reports from the break out groups and another question and answer session.

The educational forum is designed for justice system professionals and local government officials but interested members of the public are also invited to attend.

Those wishing to register for the seminar at NIU will be required to submit their name, email and their personal or professional affiliation.