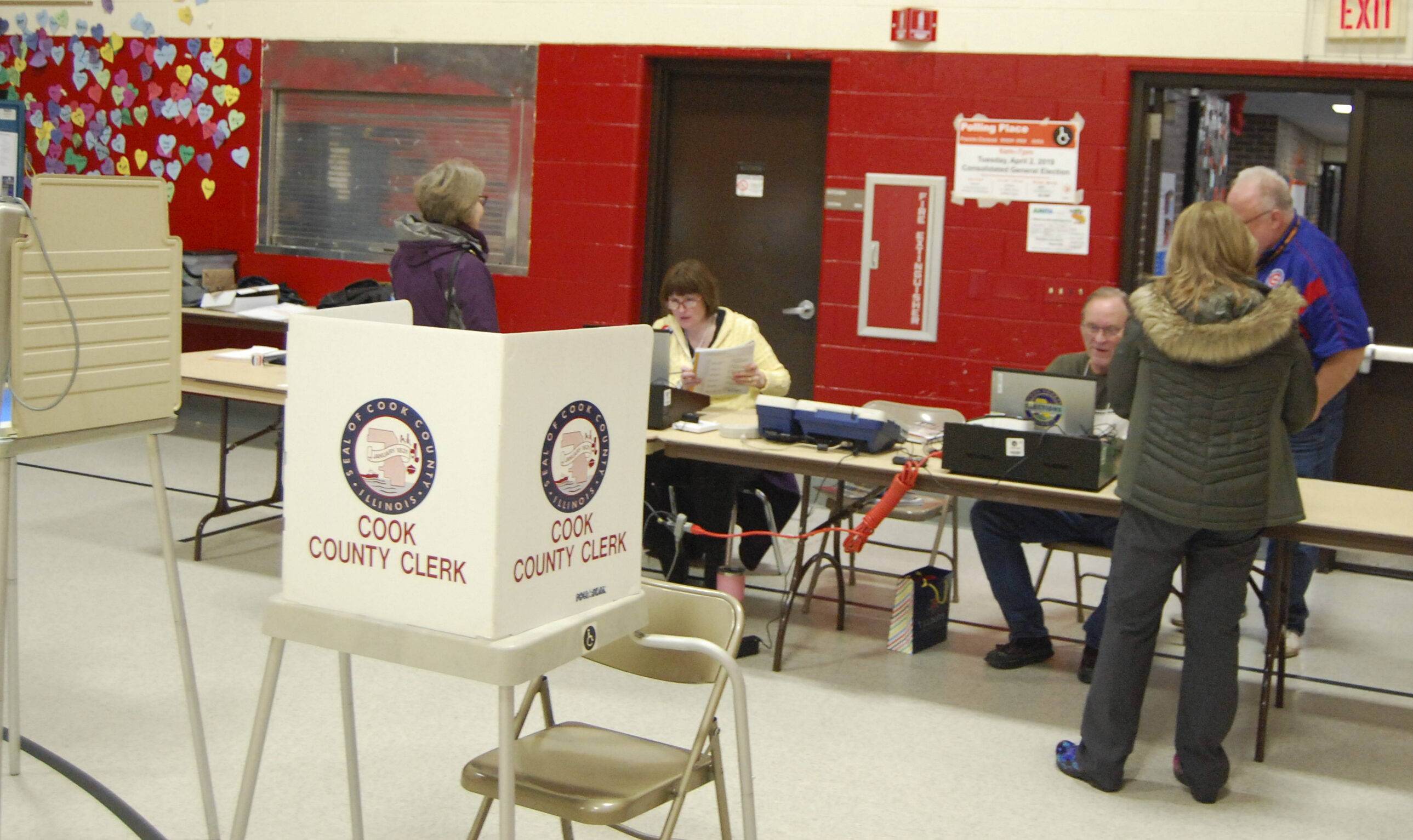 Local candidates running for federal, state, and county offices addressed those issues in a Journal & Topics Media Group candidate questionnaire. Although some running for federal office did not comment directly on the SAFE-T Act — as it is state legislation — they did weigh in on crime and guns.

“I am proud to have supported House Democrats’ public safety package as well as gun control efforts,” U.S. Rep. Jan Schakowsky (D-9th) said. “I would like to see background checks strengthened and a reinstatement of the assault weapons ban.”

Her opponent, Republican Max Rice, said on crime, “The biggest issue we can repeal is the SAFE-T Act. However, we also need to enable police to do their job to stop crime.”

On gun control, Rice said fewer regulations are needed. “I would love to see open carry similar to what they have in other states like Texas. We need more good guys with guns, not less.”

Tommy Hanson, 5th Congressional District Republican candidate, said, “Isn’t it amazing in the city that didn’t allow gun ownership, the crime rate was always one of the highest? We need less tolerance and more empowerment and funding of law enforcement.

“Now that Chicago allows gun ownership, we need stronger laws regarding crimes carried out with a gun that is not licensed to that individual. Criminals need to know that if they are going to break the law there will be severe consequences. There has to be a disincentive to commit crime or our numbers are going to continue to rise.”

On gun regulation, U.S. Rep. Raja Krishnamoorthi (D-8th) said, “I would ban the sale of semi-automatic rifles, such as the one used in Highland Park. I’ve sponsored legislation to require a three-day waiting period for all handgun sales and cosponsored a bill to outlaw the sale or transfer of a firearm without a background check. For these reasons I have earned an F rating for the NRA, which I am proud of. We owe it to our children and communities to do more than offer hopes and prayers.”

On crime, he said, “Crime is a growing issue, particularly in our inner cities. In my district, I recently secured robust funding ($150,000) for the village of Hoffman Estates to help its police combat domestic violence. While we should hold bad actors accountable in law enforcement, we must invest in our law enforcement to protect our community.”

Krishnamoorthi’s opponent Chris Dargis, said on his website, “The safety of our communities is the foundation of society, allowing us to live, work, educate our children, and achieve the American dream. ‘Defund the police’, lax prosecution, and extreme policies that hamstring law enforcement while putting criminals back on the streets have made us less safe while emboldening criminals. I’ll fund our law enforcement agencies to provide better training and more resources to get crime under control and keep our streets, our children, and our communities safe.”

On gun control, State Sen. Laura Murphy (D-28th) said, “To keep our communities safe, we have to make sure we encourage responsible gun ownership and keep illegal guns out of the hands of criminals, those who are mentally ill, and people who can’t pass a background check. I supported banning ghost guns and creating red flag laws so we can keep people safe while not infringing on the rights of responsible gun owners. I will also support legislation that bans the sale of military-style assault weapons.”

On crime and the SAFE-T Act ,Murphy said, “The majority of the SAFE-T Act contained needed and necessary reforms.” On the issue of elimination of cash bail, Murphy said, “The current system allows those with means, regardless of the potential danger to themselves or the community, the opportunity to bond out. Dangerous people who can afford to buy their way out roam the streets while those without means remain in jail.”

She continued, “I think there still remains an opportunity to make changes to every aspect of this bill that accomplishes the intended goal.”

Murphy said she is cosponsor of a bill in Springfield, “which will clarify any ambiguity in the law and stop all the misinformation and lies that have been spread about this legislation.”

Murphy’s Republican opponent Sal Raspanti said, “If elected, I will push to have the SAFE-T Act repealed and propose new legislation for bi-partisan support.”

On gun regulation and crime he said he would, “Increase the minimum age to obtain a firearm. [Make a] bi-partisan commitment to address mental health issues and its correlation to violent crimes. [Have] greater and/or more severe accountability for those who commit crimes with firearms, and, “temporarily ban the sale of high power/high magazine rifles until meaningful changes/improvements are made to prevent tragedies like the one in Highland Park.”

“Gun violence is a public health crisis. I have taken key votes to strengthen our firearm restraining order law to ensure those who are a danger to themselves or others can get the help they need,” she said.

On the SAFE-T Act, Mussman’s Republican opponent, E. Dale Litney, said, “I support our police and first responders and in Springfield will vote to repeal the SAFE-T Act. All the stakeholders need to be brought into the discussion, not just the super-majority Democrats and special interests.”

On gun regulation, he said, “At the state level, we should focus on taking guns out of the hands of those not authorized. Police don’t have the resources to do that and we need to fund and support the police.”

On guns, State Rep. Marty Moylan (D-55th) said he would support, “A ban on assault weapon sales in Illinois, closing the loopholes where guns can be purchased with no background check, and bans on accessories that make these weapons more deadly such as high capacity magazines and bump stocks.”

On the SAFE-T Act, crime, and public safety, Moylan said, “I worked with law enforcement agencies to address the concerns I had with the original (SAFE-T Act) bill in the trailer bills. Our police need to be at the table to discuss these kinds of bills. We have to make sure our police have the tools and funding they need to protect our citizens.”

Moylan’s Republican opponent, Mike Lupo, said, on his website, “With crime rates increasing across the state, we must provide law enforcement officers with the resources necessary to keep our streets safe. Lawmakers should not make it more difficult for police officers to do their job. We cannot defund or reduce law enforcement programs.”

State Rep. Mike Kelly (D-15th) returned a candidate questionnaire but did not answer questions about the SAFE-T Act, and had no information on it on his website or Facebook page. On gun regulation, he said he supports, “Universal background checks,” and said, there is “no need to have automatic weapons.”

His Republican opponent Mark Albers did not answer policy questions on the Journal’s candidate questionnaire, but on his website says, “Law enforcement needs more resources to help keep our streets safe. The cuffs go on the criminals, not on the cops. I will not defund or reduce police or policing programs. We must support law enforcement everywhere.”

On the SAFE-T Act, he said, “HB3653 must be repealed… This makes our street less safe by making it harder on our police and easier on criminals.”

On gun regulation, he said, “The Second Amendment will be protected. Gun violence will not be resolved by passing laws against law-abiding citizens.”

On the SAFE-T Act, State Rep. Mark Walker (D-53rd) said, “The misinformation being spread about these changes are a result of fear-mongering and nothing else. These reforms and the SAFE-T Act, in particular, puts more authority in the hands of prosecutors and judges to keep violent criminals off of our streets.”

On gun regulation, Walker said he wants to see a ban on “assault-style weapons” and high-capacity magazines.

“As a Vietnam veteran, I’ve seen first-hand the destruction of these weapons of war. They have no place in our civil society. We also need to strengthen our red flag laws to keep guns out of the hands of those who shouldn’t have them,” Walker said.

Walker’s Republican opponent Jack Vrett returned his candidate questionnaire without answering policy questions. On his website on the issue of public safety, Vrett says, “The primary role of government is to ensure public safety, but short-sighted policies have created a consequence-free environment. Lawlessness in Chicago is causing ripple effects throughout suburban Cook County. We must enforce criminal laws, support victims, and defend — not defund — our police.”

State Sen. Laura Fine (D-9th) said, on gun regulation, “We recently passed a large package of criminal justice and public safety legislation. We need to follow through with implementation before making any other changes.

“Recent laws that need to be implemented include HB3699, which tackles the growing problem of carjacking in our state, as well as the Inform Act (HB1091) that cracks down on organized ‘smash and grab’ retail theft rings. In the short term, I’d like to see these implemented, measure their effectiveness, and move forward armed with that information.”

On gun regulation, Fine said, “We also need to get guns off our streets and out of the hands of dangerous people. I am a proud supporter of banning assault rifles and extended magazines in Illinois — these are dangerous weapons of war that serve no purpose other than to kill as many people as possible as quickly as possible.

“But it isn’t just assault weapons that pose a threat — most gun violence is committed using handguns. That’s why I am working to expand and strengthen Illinois’ background check system for obtaining weapons and cracking down on “straw purchases,” wherein someone legally able to purchase a gun does so for someone who is legally prohibited from possessing a firearm.”

Fine’s GOP opponent Paul Kelly did not answer the Journal’s questionnaire nor did he address crime or gun regulations on his website.

State Rep. Jennifer Gong-Gershowitz (D-17th) said she supports the SAFE-T Act, “but I believe it still needs adjustment and improvement.”

On crime, criminal justice, and public safety, she said, “I recently supported the 2022 Smart on Crime package of legislation that provides new training and funding to law enforcement, bans homemade ‘ghost guns,’ cracked down on retail ‘smash and grab’ organized retail thefts, and new funding for crime victims and for mental health funding. We must continue to explore new law enforcement techniques and technologies to make our communities safer.”

Bradley Martin, the Republican running for the 17th State House seat, did not return the Journal’s questionnaire and did not have a website or Facebook page with any policy issues addressed.

What Is the SAFE-T Act?

Some of the most significant provisions in the Illinois Safety, Accountability, Fairness and Equity-Today (SAFE-T) criminal justice reform act include abolishing cash bail and allowing judges to determine whether someone charged is a threat to the community and must remain in custody. The act changes some rules related to the supervised release of persons in custody. It states that discipline and dismissal of peace officers may no longer be included in police union negotiations. The act makes police officers subject to criminal misdemeanor charges of official misconduct for turning off officer body-worn cameras under certain circumstances. It standardizes statewide use of force standards and creates a database tracking the deaths of prisoners in custody.

Several trailer bills are expected to be introduced in the fall veto session to make updates to the SAFE-T Act.