Despite the objections of six Oswego residents, the Village Board voted 4-2 Oct. 18 to approve concept plans for a 306-unit apartment complex.

The residents were all from neighborhoods adjacent to the currently vacant 20.69 acre site, previously zoned B-3 for commercial development, just west of the Ogden Falls subdivision on the village’s east side.

Greystar Development Central, LLC’s concept plans for the Birchway apartment complex calls for the construction of seven, three-story apartment buildings that would be located around a central stormwater detention area on the western half of the site.

Amenities on site would include a clubhouse with a pool on the westernmost portion of the property near an extension of Woodford Road and a dog park at the southwest corner of the site. On the east side of the site, a 5.6 acre parcel would become a prairie and serve as a buffer between the apartment complex and Ogden Falls.

Ron Belec, an Ogden Falls resident who said he represented some of his neighbors, voiced opposition to the development, and asked village officials to consider the impact it would on the surrounding areas before they vote.

“It’s our opinion that it doesn’t fit with the single-family homes in the surrounding area,” Belec said “Renters are primarily transients, I mean, let’s face it. Let’s make it a nice place for single families to put down roots and grow with Oswego.”

Other residents compared Birchway to the Montgomery Place apartment development in neighboring Montgomery, and cited concerns about increased crime, transience and traffic problems the development could bring to the village.

Residents also raised issue with the proposed connection of Woodford Road to Rt. 34 and voiced concern that increased traffic will negatively impact the safety of their children on the streets in their neighborhood.

David Oster lives on Woodford Road and said there are nine children on his corner alone and probably 60 more on his street. He said the number of children playing in the street with cars speeding on Yoakum Boulevard is already a problem.

“I live right on the corner, I have four kids. I really worry it’s (Woodford Road) going to become a racetrack and my kid is going to get killed,” Oster said. “I think it’s an absolute horror waiting to happen.”

For traffic access to the apartment complex, the developers have proposed extending Woodford Road south from Route 34 to the southern terminus of complex site.

In the original plans, the new section of road was to connect with an existing section of Woodford Road to the south, but after hearing feedback from village officials and residents, Greystar representatives said they have no plans to connect the road.

Greystar representative Christine Cobb also assured Village Board members and residents that they have a very strong resident tenant screening process and that it was important to the firm that they maintain the utmost standards of the community.

Village Trustee Jennifer Jones-Sinnott inquired about security and safety measures, and if there are plans to make the complex a gated community.

Cobb said they initially created a site plan that would better mesh into the surrounding communities with interconnecting walking trails and streets, but if the village prefers a gated community, they are open to that.

Village Trustee Kit Kuhrt raised issue with the site’s B-3 commercial zoning, but developers argued the apartment complex would be a less intensive use of the site than commercial and business developments. 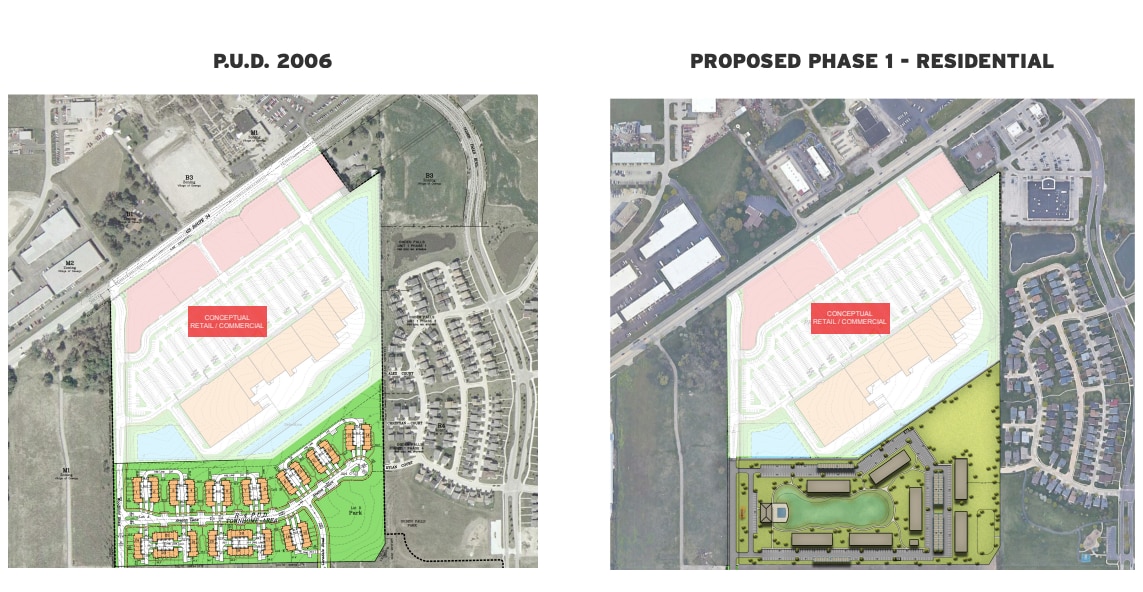 Concept map for the 306-unit Birchway apartment complex (right) proposed south of Route 34 in Oswego, compared to the previously planned urban development (left) in 2006. (Photo provided by Village of Oswego/)

Though zoned B-3 in 2008, the village’s community development staff believes the proposed apartments would provide additional housing options and the residential use “may be appropriate to the surrounding land uses,” a village staff memo reads.

Trustee Brian Thomas made a motion to table the concept plan vote to a future meeting due to public concern and issues at the nearby Montgomery Place apartments. The motion was seconded by Kuhrt, but the Village Board rejected the motion in a 5-2 ballot with Kuhrt and Thomas casting the only votes in favor of tabling.

The concept plan was then approved in another 4-2 ballot, with Kuhrt and Thomas voting no.

Developers said they are eyeing breaking ground next summer, with the first apartment units becoming available in the summer of 2024.