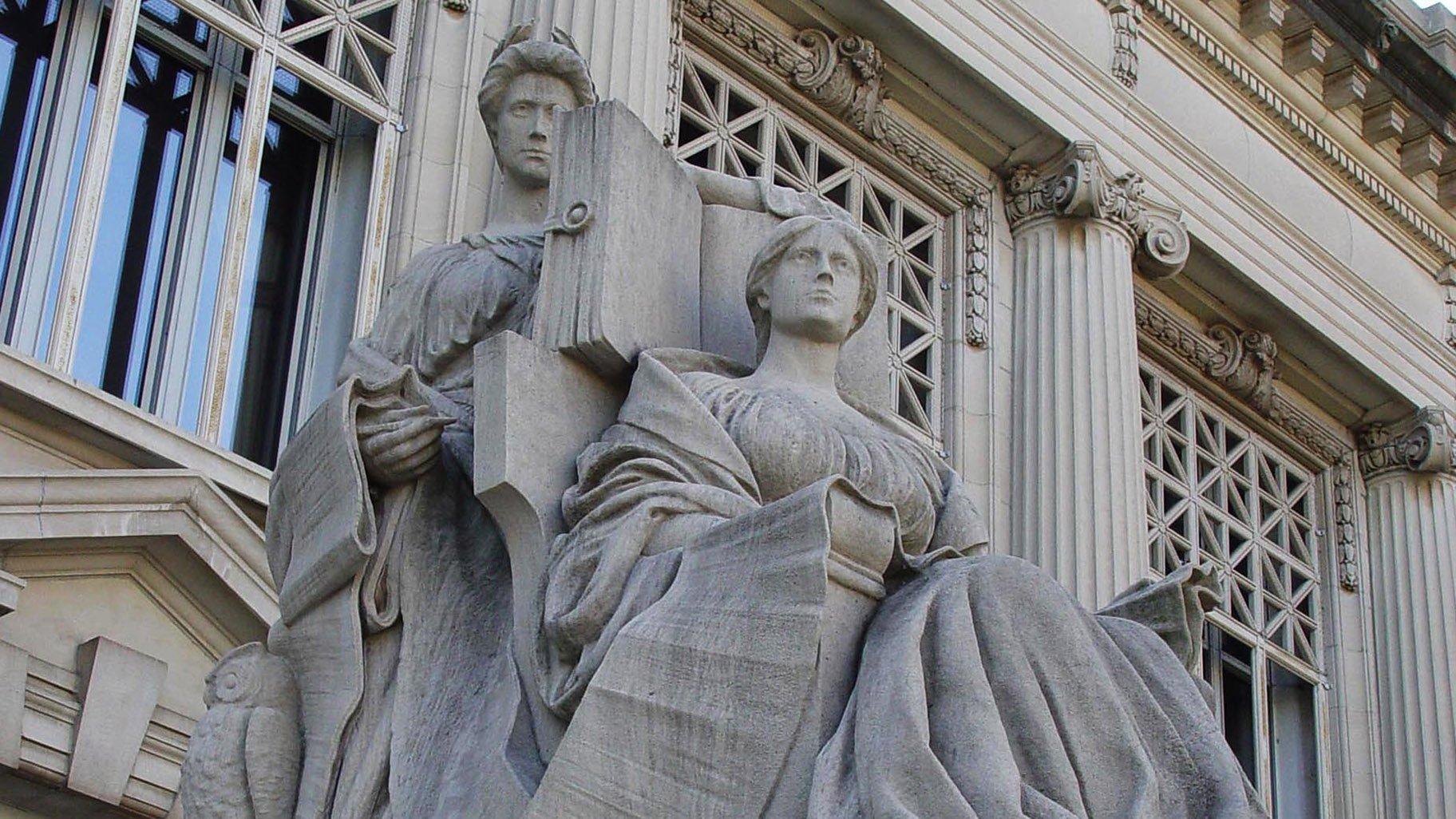 A constitutional amendment and governor’s contest are among the top of ballot contests that will be decided in early November, but some argue the most pivotal races will be at the bottom of the ballot as voters decide who sits on the Illinois Supreme Court.

There are two big battles for Illinois Supreme Court this year. Who wins them won’t just decide who actually sits on the bench of the state’s highest court, it will also determine which party controls it.

“These races often fly under the radar but these are the two most important races on our ballot in November,” said lawyer Trisha Rich, who is on the board of the abortion rights group Personal PAC. “And even though that might sound like an overstatement, it’s not.”

It’s rare that voters get this sort of influence in one election cycle because there aren’t often actual contests.

Once judges win a seat on the Illinois Supreme Court, they often can stay for a long time. Illinois justices don’t have lifetime appointments like on the U.S. Supreme Court, but their terms last a decade. Once that decade is up, a justice doesn’t run against someone else. They run on their record for retention.

This year, Justice Mary Jane Theis — one of the three Illinois Supreme Court judges from the 1st District — is up for retention. Theis is slated to be the next chief justice, a rotating position. Another 1st District judge, current Chief Justice Anne Burke, is retiring. Justices chose Appellate Judge Joy Cunningham to replace her starting Nov. 30 — after the election. Should she chose to run for the seat in 2024, Cunningham is expected to face heavy competition.

“In Illinois politics, it is rare to have what you call a real contest because you have incumbents who get in there and get entrenched. Especially with judges, we have retention elections. Once they’re in there, it’s very hard to get them out,” said Jacob Huebert, director of the Libertarian-leaning Liberty Justice Center.

Two years ago, former Justice Thomas Kilbride was the first justice to lose his bid for retention, in a 2020 election fight that set spending records.

It’s also rare to have elections with results that could change control of the court because of how the districts are drawn.

The court is divided into five regions. Each are represented with one Supreme Court justice, save for the first region, which covers all of Cook County and is represented by three justices.

When there are contests, it’s a given that the three seats covering Cook County will be held by Democrats.

After Kilbride was knocked out, Republicans saw 2022 as a year to at long last tip the balance of the court because two suburban districts are in play, which could be won by the nominee of either party.

The 3rd District, covering the southwest suburbs, pits current Supreme Court Judge Michael Burke running as a Republican against Appellate Justice Mary Kay O’Brien, running as a Democrat. Burke is not up for retention, as he was appointed to the seat upon former Justice Bob Thomas’s 2020 retirement.

Democrats hold a 4-to-3 majority, but if the GOP nominees win both of those contests, control of the court would flip to a 4-to-3 Republican majority for the first time in decades.

Former state legislator Jim Nowlan is part of the Judicial Fairness Project, and was involved with the effort to oust Kilbride after he and “his fellow Democrats sullied their robes in 2016 with a preposterous decision that knocked off the ballot a citizen’s initiative to put an independent mapping question before the voters.”

Nowlan said Democrats drew the judicial map to favor their party back in the ’60s.

“Since then, continuously, Democrats have had a majority on the Illinois Supreme Court and they have used that majority reliably to back the positions of (Chicago Ald.) Ed Burke and (former Illinois House Speaker) Mike Madigan on redistricting, term limits, pensions,” Nowlan said. “And so, it’s time for a change.”

For the first time, Illinois’ Democratic-controlled legislature and Democratic Gov. J.B. Pritzker last year redrew the Illinois Supreme Court districts, in a manner that Nowlan said will make it more difficult — but not impossible — for Republicans to win them.

He adds that the Dobbs decision overturning Roe v. Wade has changed the landscape and made it more difficult for the GOP judicial candidates.

Some Republican groups and donors that had been expected to come through with heavy funding backed away after Curran, who has never been a judge, won the primary instead of the party’s establishment-backed Lake County Judge Daniel Shanes.

If the control of the court does flip, any number of issues could be at stake, even though justices are to be non-partisan once the elections are over.

Nowlan named opinions that could decide pensions and redistricting, and pointed out that workers’ compensation cases and standards have been a perennial issue with judges elected as Democrats siding with the party’s longtime trial lawyer allies, and those elected as Republicans siding with their GOP’s longtime allies of business interests and insurers.

Reproductive health care could also be at stake.

Abortion rights activists say that Illinois is an island in protecting the right to have an abortion but say that could change if a challenge is brought before the state’s high court.

Personal PAC is non-partisan, but is supporting Democrats Rochford and O’Brien.

Rich is on the leadership council of Protect Our Court, and said hard-won rights are at risk depending on the results of the two Supreme Court races.

“What we care about are that body of case law that provides pregnant people the right to make their own medical decisions without — as much as I love the Illinois legislature — without the legislature in there in the medical room with me, right,” Rich said. “The fact of the matter is that any anti-choice group in Illinois could bring a challenge to any one of these laws at any time and if the Supreme Court flips for them, to what looks like a friendly court, we can rest assured that they’re going to do that. And we know that because that’s what we see all over the country.”

Knowing how judges will decide any case is complicated because due to legal codes, judicial candidates can’t ethically take stances on issues as do candidates for legislative offices.

But organizations are nonetheless spending millions of dollars on ads to promote or attack the various judicial candidates.

The Illinois legislature last year voted to tighten the reins on who can spend in judicial races.

Over the objections of Republican lawmakers, Democrats — who control the General Assembly — passed a law that bans spending on judicial candidates from those who live outside Illinois.

The conservative-leaning Liberty Justice Center is suing to get the law tossed.

“We represent a man who was a lawyer in Illinois for 63 years before he finally retired to Texas, and he has a number of former colleagues who are running for office. But this law says he literally can’t support them at all, and that’s’ totally unjustified,” Huebert said. “It’s obviously an attempt to influence who does and doesn’t participate in politics, get to have a say in our elections. And that’s unconstitutional.”

Huebert said the Liberty Justice Center is waiting for a federal judge to make a decision.

The law also forbids contributions of more than $500,000 to independent groups, known as dark money groups, advocating for or against a judicial candidate.

Huebert said that is unconstitutional and a deliberate attempt to “tilt the political playing field. And so when you had a judge (Kilbride) successfully removed from the bench, the General Assembly moved quickly to try to limit people’s ability to participate in judicial elections, to help them preserve the status-quo.”

Democrats say the limitations are meant to protect against undue influence.

via Stories by amanda vinicky https://ift.tt/pbeaXEu