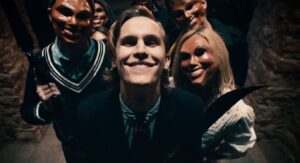 If your Crim Law or Crim Procedure classes were anything like mine, you didn’t spend that much time going over bail. This means that bail, cash or otherwise, is one of those few areas of legal concern where general-practice JDs don’t really know that much more than the average public. As such, they run the risk of being as vulnerable to misinformation as the legally uninitiated among us. If only there were someone who could give a run down of what bail reform is actually about instead of spreading scare tactics that are literally based on horror films, like this mess:

*Drumroll please* Here that person is! She is a public defender who is more well-versed on the actual outcomes of bail reform than the overlapping circle of people who think that bail reform will make murder legal and that horse paste will cure COVID.

Thankfully, Olayemi isn’t the only one going out of their way to counter the race-baiting propaganda surrounding Illinois’s bail reform:

But the most controversial piece of the SAFE-T Act is the Pretrial Fairness Act, which goes into effect on Jan. 1, 2023 and will abolish cash bail in Illinois — the first state to do so in the country. Chicago organizers and civil rights groups fought tirelessly for this historic measure, understanding that the majority of pretrial detainees are Black or brown. Their inability to afford a bond leads to job loss, housing uncertainty and loss of child custody — while doing nothing to improve public safety.

Quick aside, you know some factors that actually lead to an increase in crime? Job loss and housing uncertainty. Take Philly for example; a city that saw a drop in crime after proving funds for folks to invest in the structural integrity of their homes.

However, a highly-funded, far-right conservative misinformation campaign has spread rapidly across social media in recent weeks, using fear-mongering buzzwords such as “the purge” and anti-Black imagery such as mugshots to describe an untrue scenario of lawlessness when the Democrats supposedly let all the criminals out of jail on Jan. 1.

“This is just in line with what we’ve seen in history. After we see a huge sort of uprising of civil rights demands, and they combine race, class and gender, there is going to be a reactionary element,” said Sen. Robert Peters, chair of the Senate Black Caucus and a co-sponsor of the SAFE-T Act.

So please, if you see anyone spouting rhetoric against the “Purge Law,” please direct them to literally any of the videos where Olayemi clearly explains what is actually going on. Here’s another one just for shiggles.

Also worth mentioning? This reform isn’t nearly as radical as folks make it out to be. The only state that have a bail system wherein commercial bail bondsmen are making a killing? The US and the Philippines. The fewer people who have a financial stake in incarceration — especially when the money comes from people who haven’t yet been convicted of a crime — the better.

Chris Williams became a social media manager and assistant editor for Above the Law in June 2021. Prior to joining the staff, he moonlighted as a minor Memelord™ in the Facebook group Law School Memes for Edgy T14s.  He endured Missouri long enough to graduate from Washington University in St. Louis School of Law. He is a former boatbuilder who cannot swim, a published author on critical race theory, philosophy, and humor, and has a love for cycling that occasionally annoys his peers. You can reach him by email at cwilliams@abovethelaw.com and by tweet at @WritesForRent.