SOUTH CHICAGO — An offshore wind farm being proposed for the Southeast Side would be the first in the state — and possibly on the Great Lakes — but residents want to make sure it actually benefits the community before moving forward.

Evans introduced a bill in January to create a “Rust Belt to Green Belt” fund and direct the Illinois Power Agency to buy power from an offshore wind project.

The 185-page bill wouldn’t guarantee the wind farm’s construction nor its location on the Southeast Side, but would create a framework for completing the farm by allowing the state to apply for federal infrastructure funds, the legislators said.

The bill would require the Illinois Power Agency to begin seeking wind farm project proposals within 360 days of the bill’s passage.

The wind farm’s proposed Southeast Side location would be about 15 miles into Lake Michigan from the Illinois International Port District at 3600 E. 95th St.

“The goal is that this is mostly privately funded,” said Chris Wissemann, a developer behind the first U.S. offshore wind farm in Rhode Island. The legislation allows the developer of the Lake Michigan project to sell the power that’s generated, he said.

“There’s money falling out of Washington that we want to have come here” and supplement the private investment, as money from the Inflation Reduction Act and the Infrastructure Investment and Jobs Act could go in to the Rust Belt to Green Belt fund, Wissemann said.

The bill would also set rules for future offshore wind projects, such as requiring developers to submit plans for hiring from underrepresented populations.

Project bids would be graded and scored on a 100-point scale, split between the bid’s ability to “create opportunities and investment in underrepresented communities,” the project cost and the “viability” of the applicant.

Evans hopes to pass the bill during the state legislature’s veto session in November, he said. If that doesn’t happen, “we’ll refile the bill in the next General Assembly in January and continue to fight,” he said.

As legislators seek support for the proposal, residents can start training to work on the Obama Presidential Center, the Red and Purple Modernization Project and other major local projects to build their skills, then “come on over to this project and work on the Southeast Side,” Hampton said. 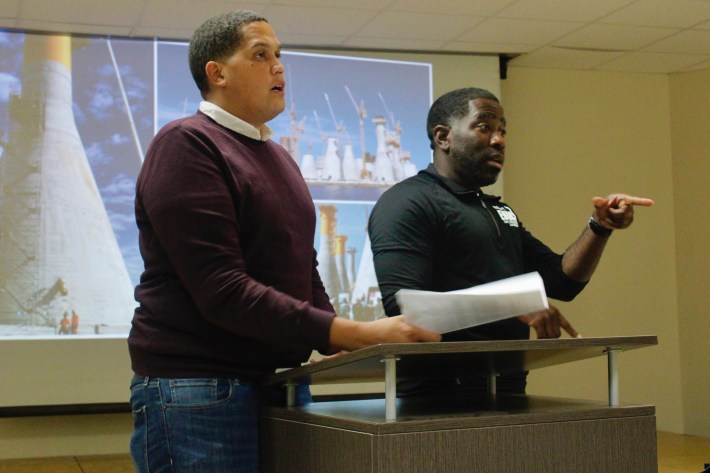 ‘We Need To Hear From The Community’

The promise of union jobs drew skepticism from some residents, who said a history of discrimination in trade unions and a lack of workforce readiness in the community could limit the number of jobs created for locals.

“Right now, if you were to take a poll — how many union people do we have currently in a three-mile radius — [it’s] not many,” environmental activist Peggy Salazar said. “That means we’re going to have to train a whole lot of folks, get a whole lot of people in position, and how are they guaranteed those jobs if they have unions who insist on seniority?”

Cheryl Johnson, executive director of People for Community Recovery in Altgeld Gardens, called on the legislators to give the bill more “teeth” to enforce equity requirements in hiring.

Strict equity requirements and clear paths for trainees and workers to speak out against discrimination are “important if you’re going to do these types of big developments in our community,” Johnson said.

Neighbors also floated the idea of using the legislation to direct funding to local community groups for job training and recruiting work.

“There’s definitely more that can be done, especially because we’re not just talking about a one-time project, but actually building this industry [into] an ongoing thing,” said Linda Gonzalez of the Peoples Council of Southeast Chicago.

Power from the offshore wind farm would go to the grid and “not necessarily benefit the Southeast Side directly” by lowering energy costs, said Karen Roothaan, a resident of the Bush. She called for a carve-out in the bill to support Southeast Side residents who want rooftop solar energy to supplement the new wind power.

A community benefits agreement, or CBA, would require the project to meet neighbors’ specific needs and quality of life issues, said Samuel Corona of the Alliance of the Southeast.

With the bill still in the legislature, residents “have a lot of time to have those conversations” with prospective developers about ensuring community benefits around the project, Evans said.

Wednesday’s town hall was just the beginning, Peters said. More meetings will be held, and neighbors and community organizations will have a chance to weigh in, he said.

“While offshore wind is a monumental opportunity for economic development, we have to get it right,” Peters said. “In order to get it right, we need to hear from the community directly.”