UPTOWN — Activists camping at an Uptown development site were removed from the property Wednesday, ending an 11-day occupation of a parking lot set to be turned into apartments.

Police removed the activists about 8 a.m. Wednesday, telling the group they were trespassing on private property, the protesters said.

Most of the protesters grabbed their belongings and moved from the lot. Three remained on the site and were temporarily detained and cited for trespassing, the protesters and police said.

A gate at the entrance of the former parking lot was locked shut. Personnel who appeared to be from development firm Lincoln Property Company remained in the fenced-off site, protesters said.

The occupation was an attempt to stop a controversial building project. The neighbors and activists protesting the project said they are not done making noise.

“We’ve been able to generate an enormous sense of solidarity that’s cemented our understanding that this was a very undemocratic process and that the community overwhelmingly rejects” the development, said Patrick Baranovskis, one of the development site occupiers. “We’re going to be resisting in other ways.” 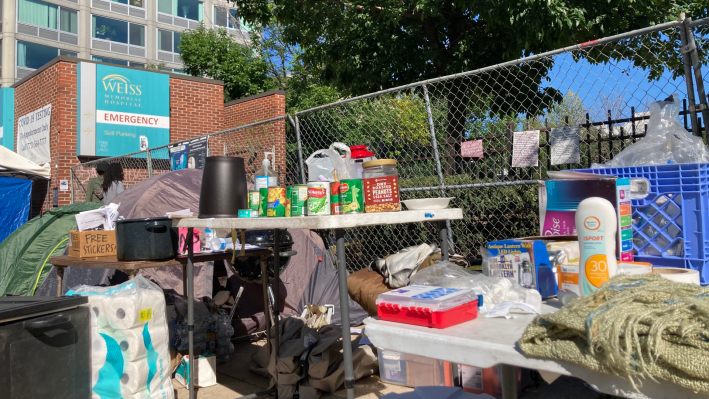 Credit: Joe Ward/Block Club ChicagoMutual aid items including first aid materials and food are now set up on the Wilson Avenue sidewalk after the group was evicted from the development site Wednesday.

After being removed from the property, the group members set their belongings up along the Wilson Avenue sidewalk.

The protesters remained on the sidewalk just outside the development site, holding signs and chanting at the corner of Wilson and Clarendon avenues. The group members said they will march to Ald. James Cappleman’s 46th Ward office to further protest the development.

Their next move after that is still being determined, group leaders said Wednesday morning.

“We haven’t made a decision,” Baranovskis said. “We just haven’t left yet.”

Police had visited the encampment before, including on Saturday, when protesters said they were told by authorities they were trespassing, they said. On Friday, contractors for Lincoln Property began erecting construction fencing around the site, leading protesters to think their removal may be imminent.

Lincoln Property has applied for construction permits for the project, but those have yet to be granted by the city, city records show.

A spokesperson for Lincoln Property did not immediately respond to a request for comment Wednesday. 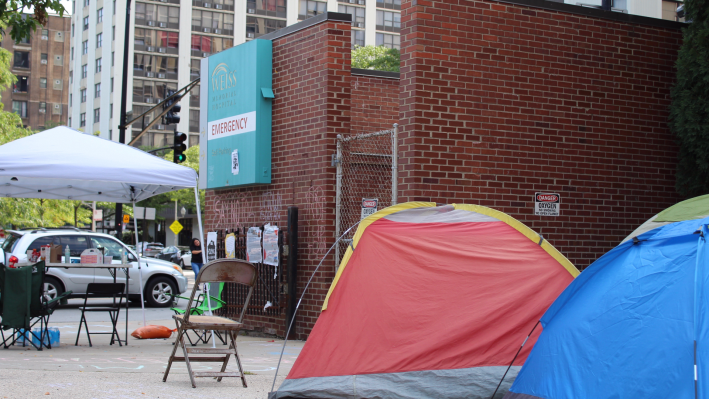 Lincoln Property Company won city approval last year to build a 314-unit apartment complex at 4600 N. Marine Drive, which for years has been a parking lot for Weiss Hospital.

Lincoln Property’s 12-story building would include 136 parking spaces, bike parking and a green rooftop. It will include eight affordable apartments — the minimum required of the project — under plans approved by City Council.

Weiss Hospital sold the parking lot to Lincoln Property, saying the $8 million profit would be invested into the hospital for upgrades and new services. That would be on top of other recent investments made into the community hospital, its owners at the time said.

But Weiss is now being sold to a new company, Michigan-based Resilience Healthcare. Its current owner, Pipeline Health, has pledged to reimburse Resilience $12 million, including $8 million from the parking lot sale, to be reinvested into the hospital, leaders for the current and likely new owner have said.

Protesters said their demand was that Resilience use the reimbursement money to buy back the development site and use it for further hospital expansion.

Neighbors made this request of Resilience CEO Manoj Prasad in person at a community meeting in April. Prasad said the property sale involves Weiss’ Pipeline and the developer and the money would be better spent investing into the hospital facility.