“Four years ago we took over a government that had endless deficits, structural deficits, billions of dollars of deficits,” said Pritzker, who added later: “The truth is, we were in dire straits.” Pritzker said his administration addressed the backlog in bills, earned improved credit ratings from bondholders and introduced four spending plans that were balanced.

“Don’t let anyone fool you,” Pritzker said. “It’s the Democrats that are a part of fiscal reform.”

The comment drew immediate applause from the 70 people gathered beneath a canopy set up in the parking lot for the occasion.

The Democratic ticket of Pritzker and Lt. Gov. Juliana Stratton is seeking a second term.

Several in that crowd announced they were from surrounding counties and had come to hear the governor make his campaign pitch. Others expressed their approval of the governor’s policies; one was thankful that local governments got reimbursed more promptly.

After the stump speech, the governor and Lt. Gov. Stratton posed for pictures. Within 40 minutes, the entourage boarded the bus and headed for the next stop. 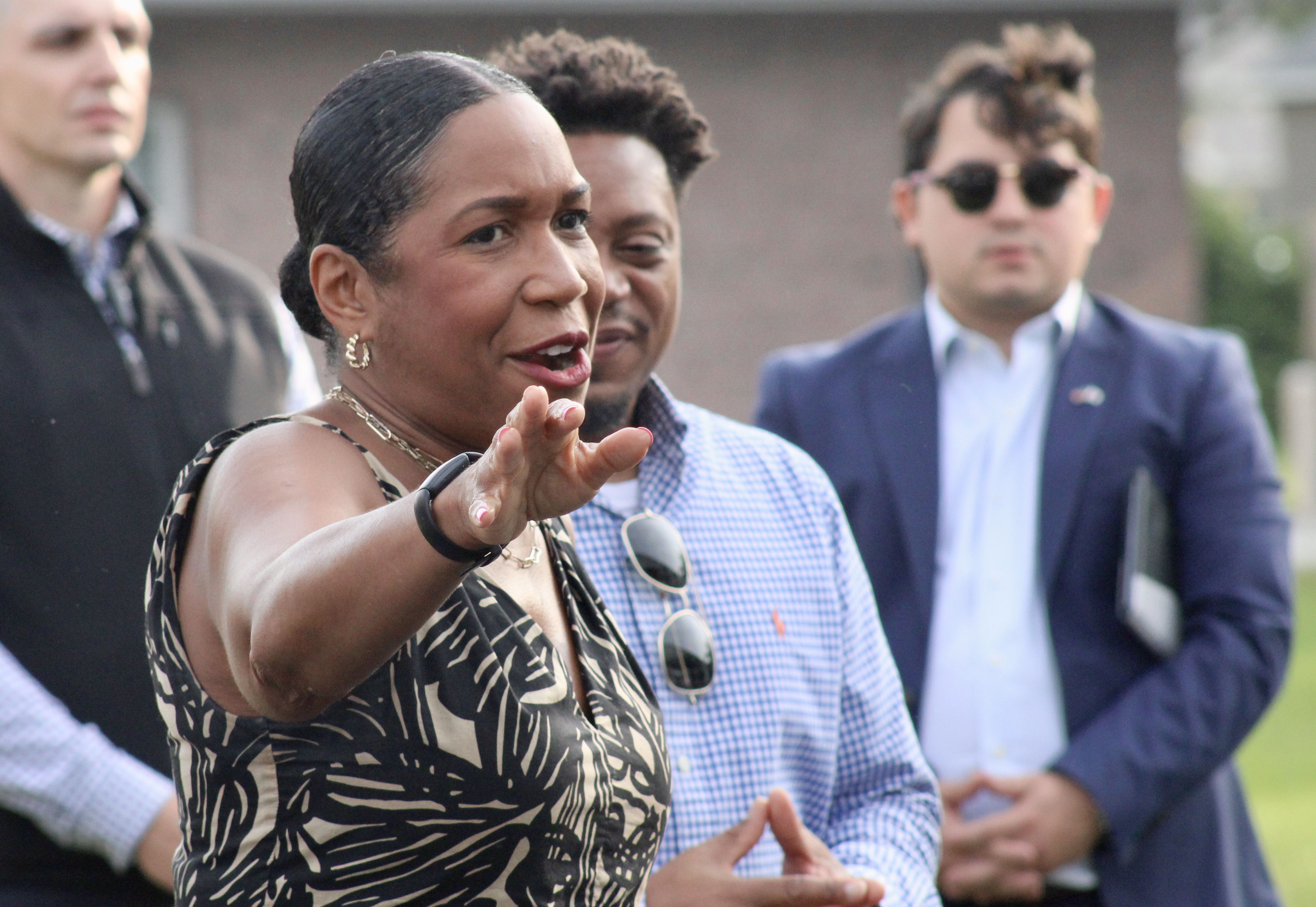 Lt. Gov. Juliana Stratton makes a point about improvements in education during a campaign stop on Sunday at the Whiteside County Democratic Headquarters in Rock Falls. (Troy Taylor/Sauk Valley)

Temps were moderate and the sun shone bright for the 8 a.m. event. Before the governor arrived, the mostly partisan crowd conversed about politics over coffee while sampling coffee cake.

Stratton spoke first. “We have started to move our state in the right direction,” she said, citing efforts made for working families, including in education and affordable health care.

When someone in the crowd piped up that health care improvements should have been done years before, Stratton answered: “That’s right! But guess what? We’ve got a governor now who is going to make sure that it continues.”

Whiteside County Democratic Chairman Fidencio Campos was the first to greet Pritzker when he got off the bus.

“Any kind of pep talk is always welcome, you know, but he’s got our support,” Campos said. “I mean, in my lifetime, look at all the crooks that we’ve had from both sides of the aisle as governors, and JB is like a shining light, you know.” 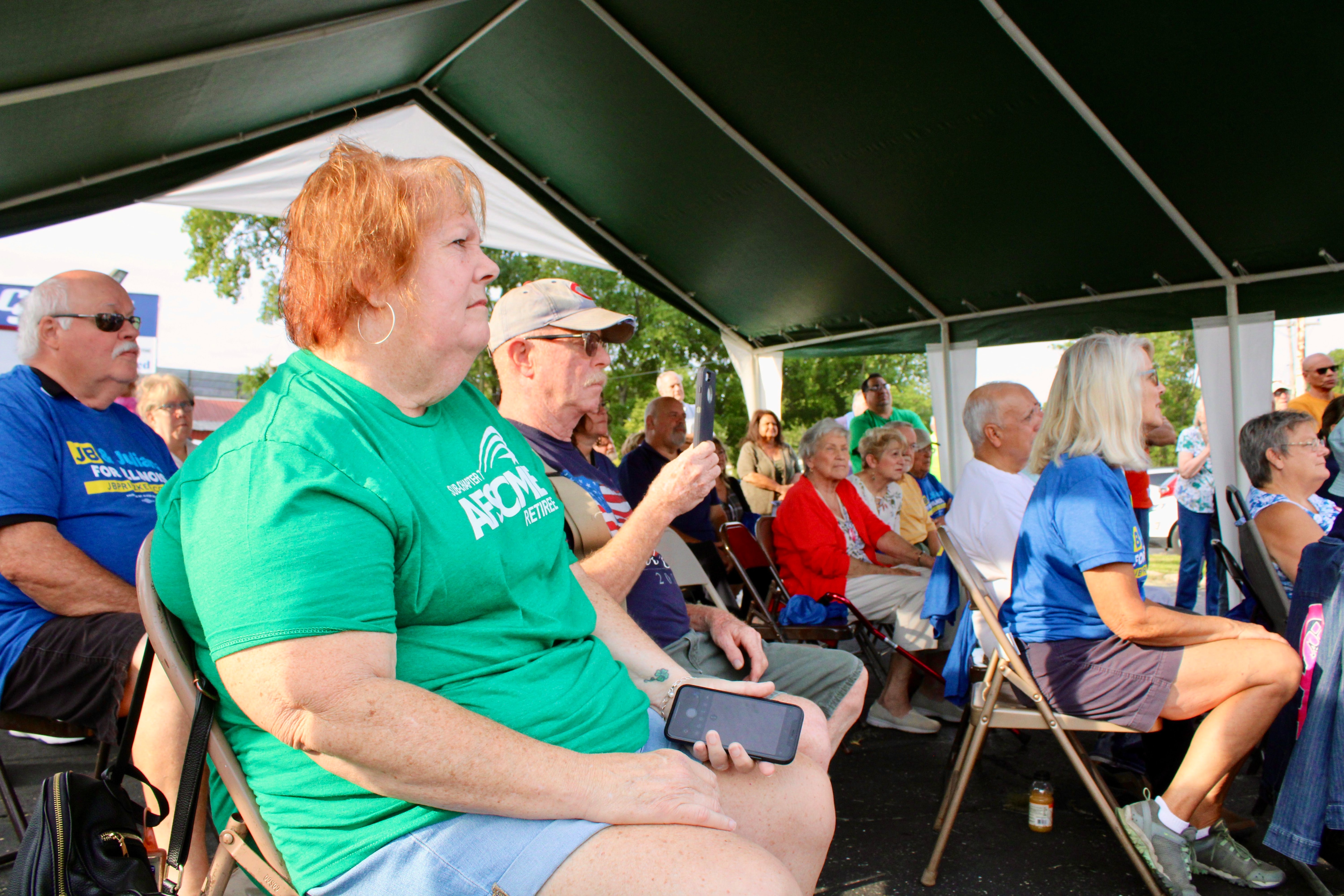 A crowd of about 70 people attend a meet’n’greet session with Gov. JB Pritzker and Lt. Gov. Juliana Stratton on Sunday at the Whiteside County Democratic Headquarters in Rock Falls. (Troy Taylor/Sauk Valley)

Pritzker spoke of the Democratic party’s other achievement, passage of the $45 billion Rebuild Illinois Capital plan to fix roads, bridges and state facilities. Pritzker said folks had best be prepared to reduce speed when they see all the orange cones.

“I don’t know whether I’ll have to apologize or take credit,” Pritzker said with a smile. “But I know one thing: we’re modernizing just about everything in the state.”

The Republican ticket is led by state Sen. Darren Bailey of Xenia and radio broadcaster Stephanie Trussell. Bailey had visited Amboy on June 17.

Pritzker didn’t refer to the opposition by name, but said they stand with organizations opposed to LGBTQ, teachers and school boards; wouldn’t wear masks during COVID-19; and are opposed to women’s rights.

“Hate is on the ballot. And hate has no place in the state of Illinois,” Pritzker said.

Before loading up for the next spot, Pritzker introduced Eric Sorensen, the candidate for the 17th District U.S. House seat being vacated by Cheri Bustos.

Sorensen, who is from Rockford and worked for TV stations in Rockford and the Quad Cities, said he offers a lifelong commitment to the district.

If elected, Sorensen said “you will all know and you’ll never question who I work for. Because I will work for every one one of you.”

The governor’s Working Families tour also stopped to celebrate the 105th anniversary of Pilgrim Baptist Church in Rockford and made an appearance at the Winnebago County Democratic Party headquarters. 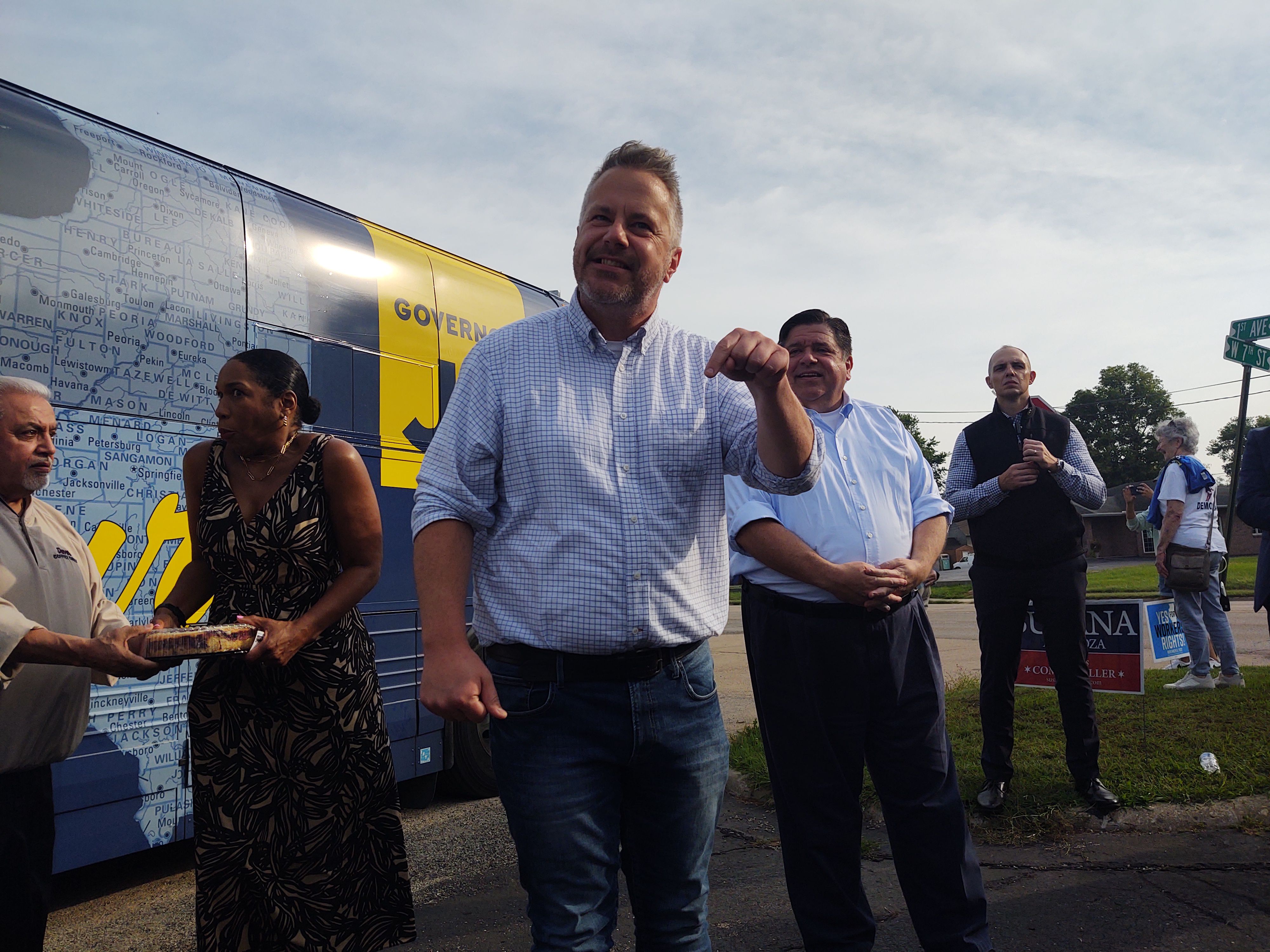 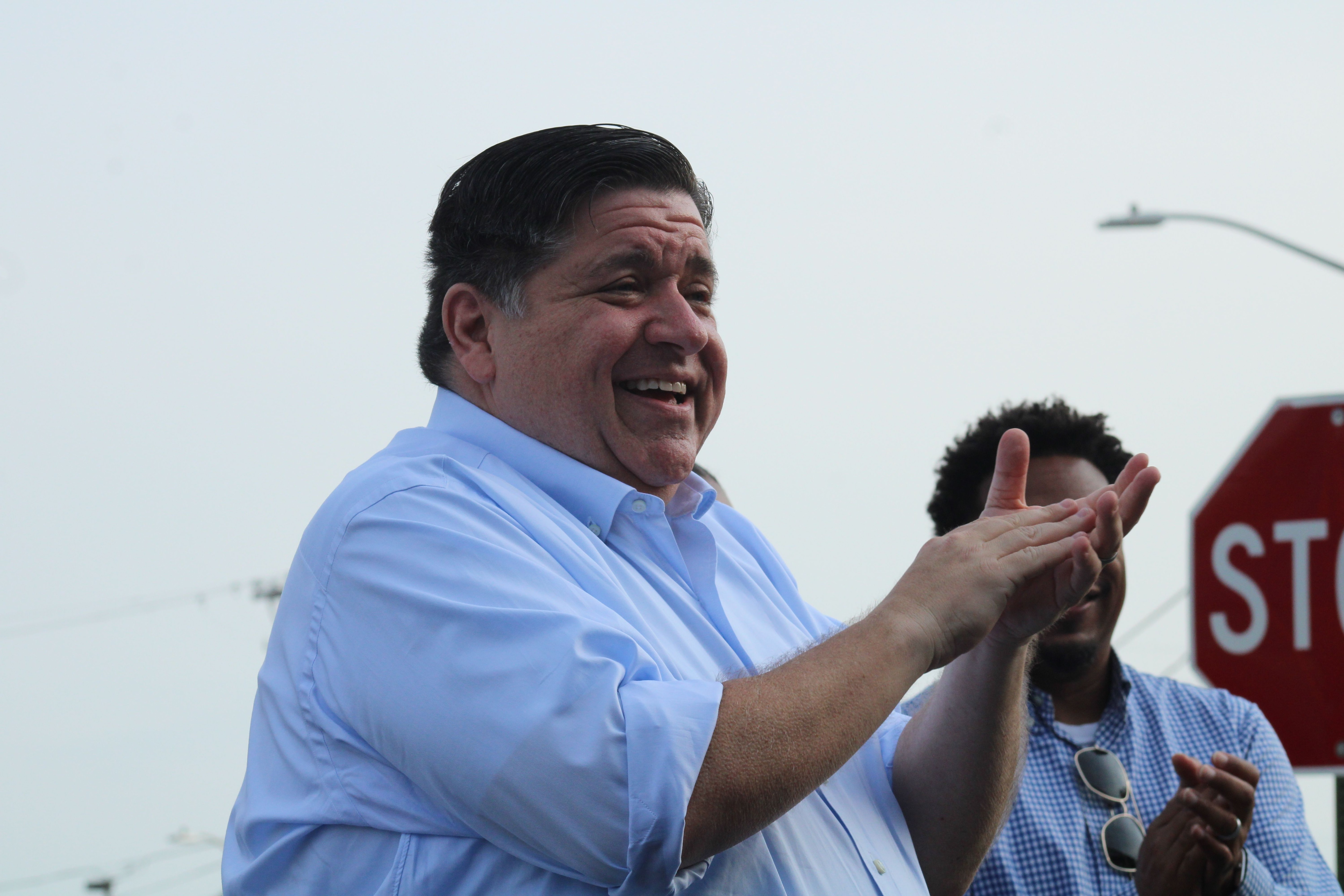 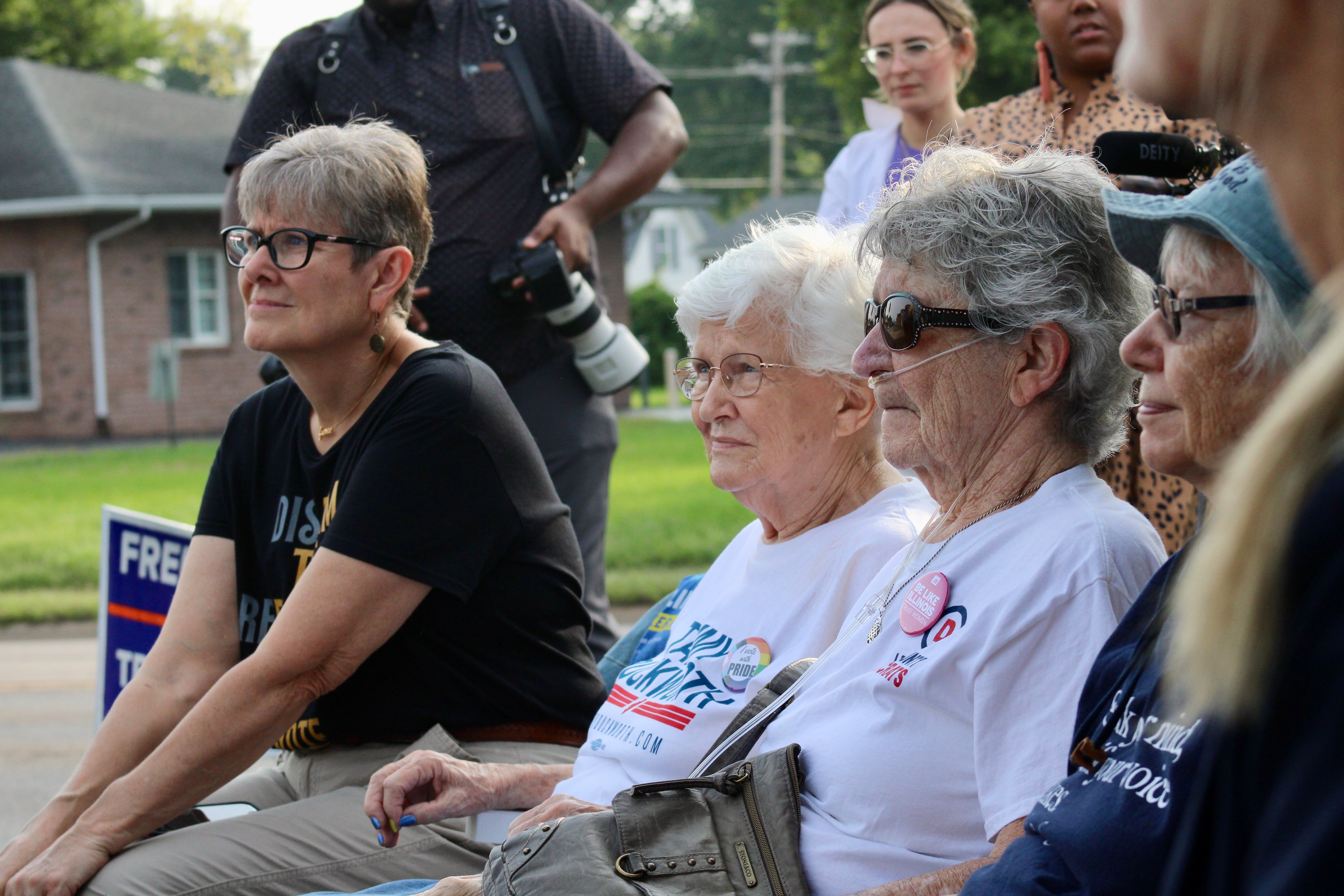 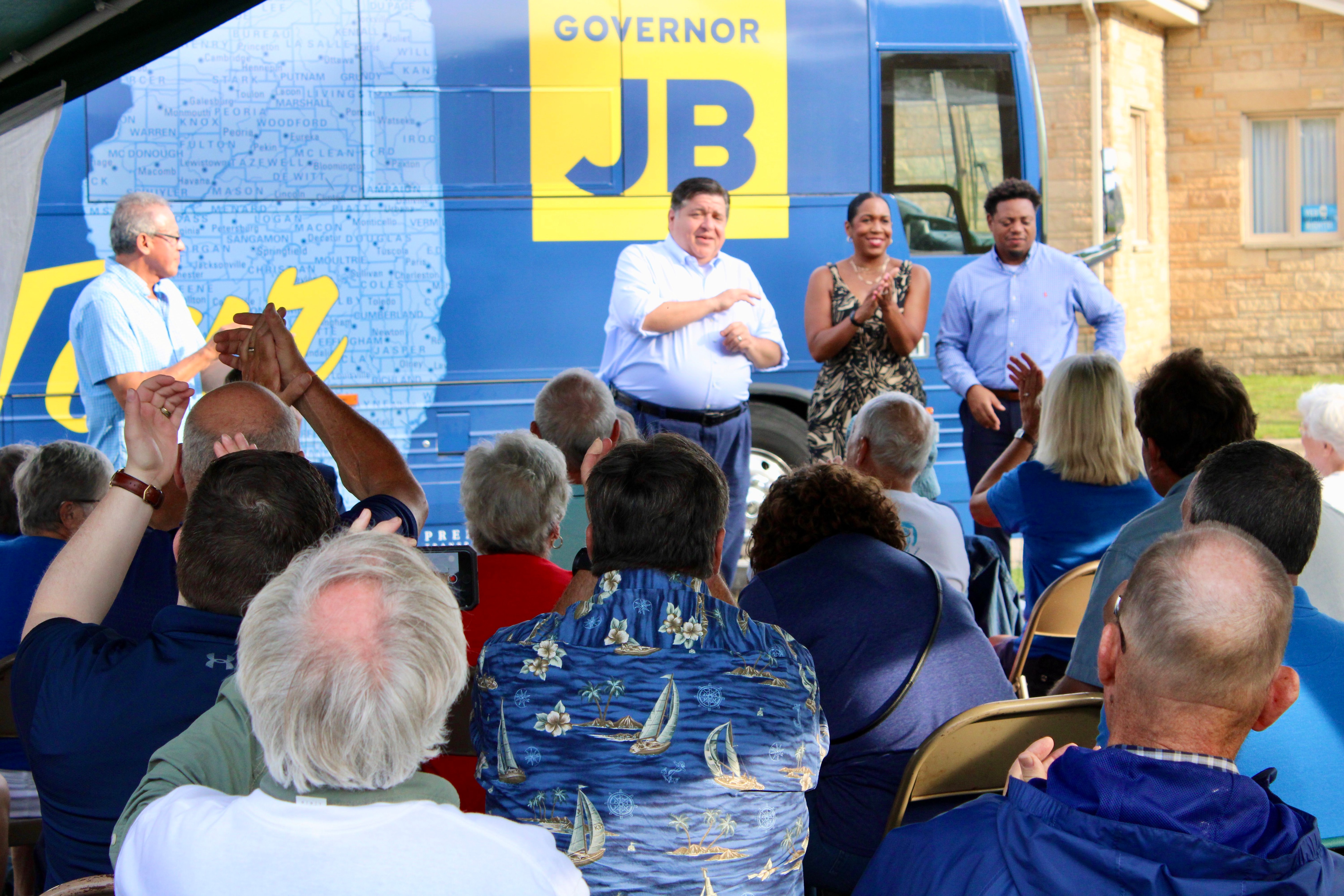