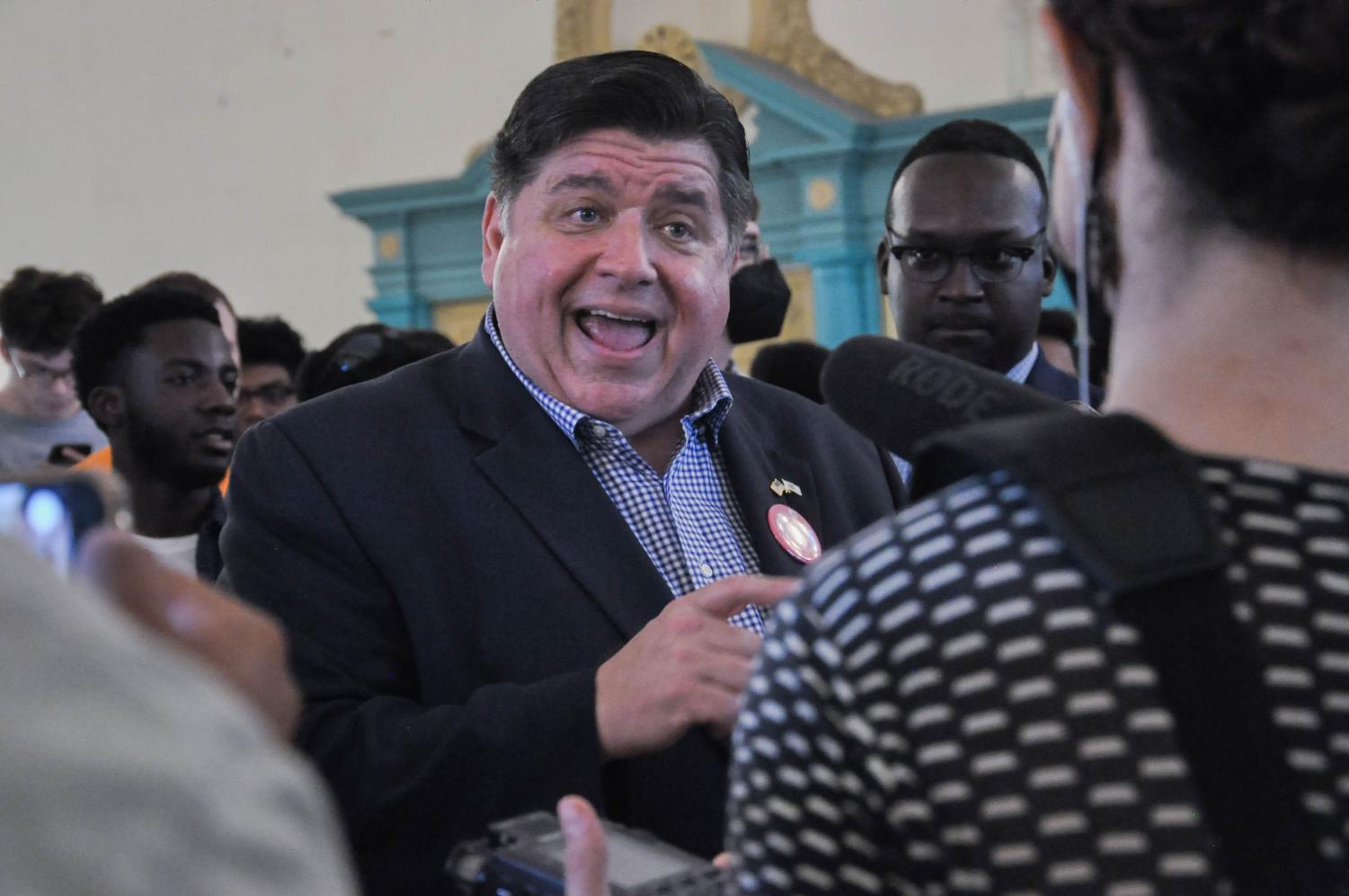 With 75 days left until the general election, Illinois Governor JB Pritzker’s campaign bus stopped in Champaign for a rally at the Illini Union on Thursday. Students, faculty and community members alike crowded into the Illini Union Ballroom to hear a lineup of political speakers encourage listeners in the lead-up to November’s election.

Hosted by the Illini Democrats, the event featured Gov. Pritzker alongside a lineup of fellow Democratic candidates that served as a who’s-who for Champaign-County Democrats.

Ben Rinker, senior in LAS, serves as the president of the Illini Democrats and helped organize Thursday’s event. Rinker has been satisfied with Pritzker’s term as Governor, and is hopeful for his chances at reelection.

“I would rank (Pritzker) as one of the most effective governors in the country, between balancing our budget, protecting access to abortion, and doing a decent job handling the COVID-19 crisis,” Rinker said. “I would say I’m pretty confident for his reelection.”

Pritzker will face challenger Darren Bailey, a republican serving in the state legislature, come November. Bailey, who has frequently been described as far-right, won the republican gubernatorial primary in June with 57.7% of the vote.

In 2019, Bailey and seven other republican lawmakers introduced a resolution calling for the City of Chicago to become its own state, claiming that Chicago is disconnected from the interests of residents downstate. When asked, Pritzker responded to claims that he only appeals to Chicagoland voters.

“It’s absolute hogwash (to claim) we’re only appealing to Chicago voters; you were in this room today, you saw the voters filling this room who were excited about the leadership that we’re providing for the state,” Pritzker said. “Bailey is the one that wants to divide the state. He’s the one who introduced a bill to literally hive off Chicago, throw it out of Illinois and make it a separate state. I believe that we are one Illinois, I have done throughout my four years in office more for central and southern Illinois than any governor in memory.”

Prior to Pritzker’s speech, the various democratic candidates traded off spots at the podium — introducing each other and rallying voters with brief speeches.

Lt. Gov. Julianna Stratton served as the event’s penultimate speaker. An Illinois alum, Stratton focused on the importance of resilience in the face of injustice and adversity. Invoking the words of poet Audre Lourde, Stratton emphasized the importance of protecting individuals’ rights.

“Silence will not protect you, so we are not going to be quiet,” Stratton said. “We’re going to get up every day, keep moving forward and make sure we do everything to protect our rights.”

Following Stratton, Pritzker took the podium to ample applause and gave a campaign speech touching on the highlights of his first term in office alongside advocating for his fellow Democrats. After the event, the Governor briefly met with and posed for photos with supporters.

Emily Earl, senior in ACES and former president of the Illini Democrats, attended the event to show her support for Pritzker’s reelection campaign as well as Democrats down ballot. Earl cited the speakers’ constant support for women’s reproductive rights as a highlight of the afternoon.

“I think talking about women’s rights is something that we really need to focus on campus so we can get the right people elected in November,” Earl said. “To anyone out there; get out and vote in November.”

Others such as Joshua Reyes, sophomore in Division of General Studies, thought the event aired on the dry side. Reyes, who labeled himself as a moderate Republican who agrees with some Democratic views, found the event to be dull and said the politicians’ speeches sounded the same.

Nonetheless, Reyes was attracted to the event’s free concessions — pizza — as well as the opportunity to see a major politician.

“I guess it’s just cool seeing the governor of your state, even if you don’t agree with them,” Reyes said.

via The Daily Illini https://ift.tt/dZNvwh8