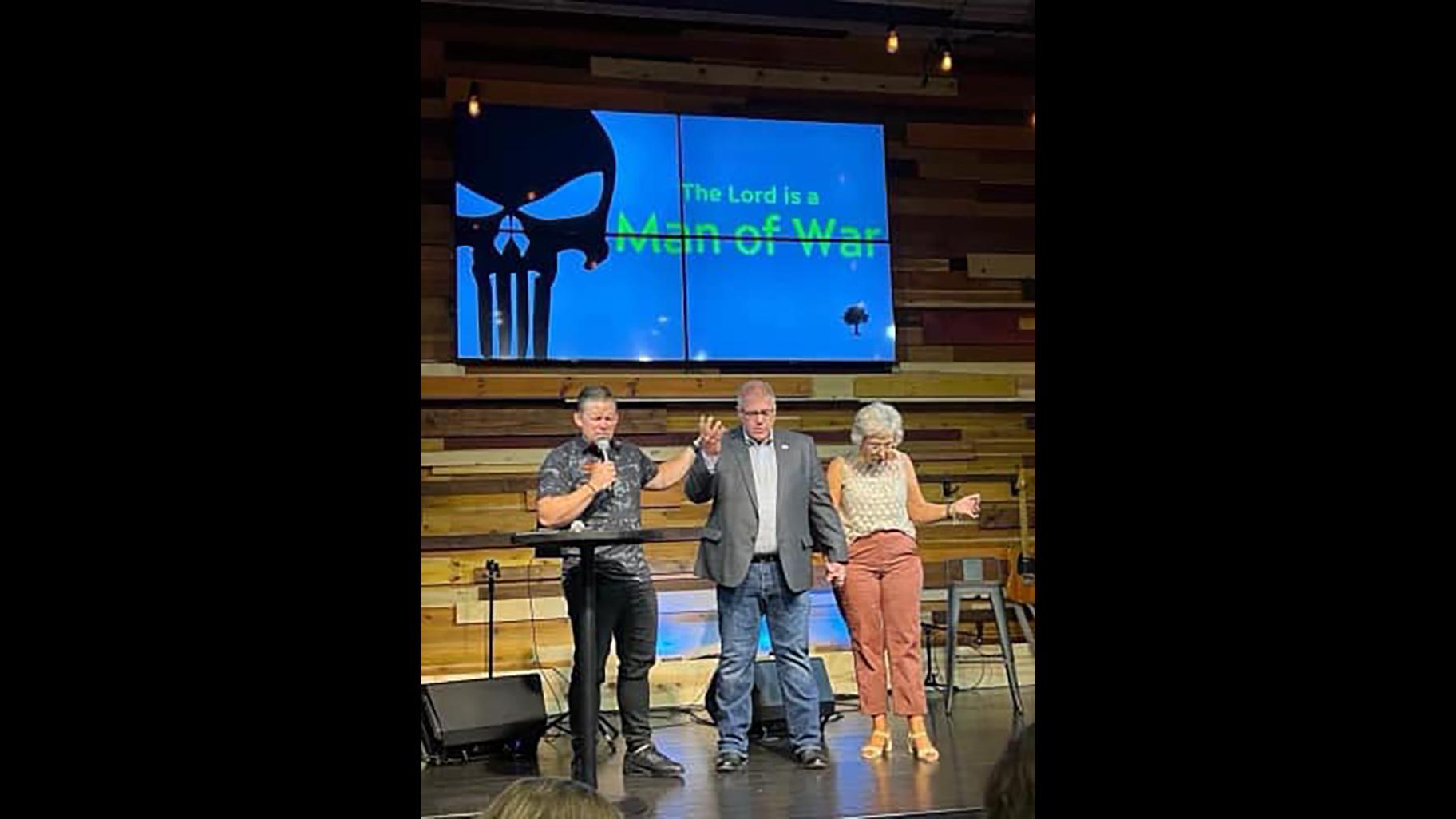 Republican candidate for governor Darren Bailey has campaigned closely with two Rockford area pastors who WTTW News has learned were at the U.S. Capitol during the riots on Jan. 6.

One of the pastors is also a county coordinator for the Bailey campaign. The association could prove to be another hurdle for Bailey’s campaign against incumbent Gov. J.B. Pritzker.

On Sunday, Bailey appeared on stage during a service with Pastor Brian Phillips at his church, the Grove Fellowship in Poplar Grove.

“We have officially worshipped with you as much as we’ve worshipped at our home church,” Bailey told Phillips in front of his congregation.

Above the pulpit was a graphic on a screen featuring a line from the Old Testament of the Bible saying “The Lord is a Man of War,” next to a symbol of “The Punisher” — a popular Marvel Comics character that has been appropriated by far-right militia groups like the Proud Boys.

“The Lord is a man of war but he deals with the spirits of evil in heavenly places,” Phillips said during the service, standing next to both Darren Bailey and his wife, Cindy Bailey.

Bailey has appeared at multiple campaign events with Phillips. He sounded similar ominous tones during his presentation Aug. 21.

“We’re at war,” Bailey told the congregants. “But we have everything we need to win, and it’s up to what we say, what we do, where we go, how we interact.”

Phillips was at former President Donald Trump’s rally in Washington on Jan. 6, 2021. He is seen in Facebook Live video shot by fellow Rockford-area Pastor Steve Cassell. Both Baileys have also campaigned with Cassell and have delivered a guest sermon at Cassell’s church, called Beloved Church, in Lena, Illinois.

In another Facebook video from Jan. 6, Cassell documents his and Phillips’ march from the ellipse toward the Capitol. On a joint podcast recorded days later, Phillips talks about being on the Capitol grounds and observing the scene.

“We’re out front doing the ‘We the People,’ just having some fun, making our voices heard, nothing evil or destructive. And then … we’re like, why don’t we go around the back entrance,” Phillips says on the podcast.

Cassel told WTTW News that the two men never went into the Capitol building, and were there to do ministry work with everyone involved in the events of that day, including police officers.

The Bailey campaign said in a statment, “January 6th was a dark day in our country’s history. Anyone who broke the law that day should be held accountable for their actions.”

Phillips did not return calls and messages from WTTW News seeking comment.

Cassell was among the first pastors in the nation to sue government over COVID shutdown orders, and says the Baileys are close friends of his. Cassel says he serves as the Bailey campaign’s Stephenson County coordinator.

In the podcast, Phillips expressed skepticism that the rioters who broke into the building during the insurrection were actually Trump supporters.

“Watching the news, and to see that this was a terrorist rally, all Trump’s fault … dude, this was a setup,” Phillips said.

The association with Phillips and Cassell could be problematic for Bailey, who is struggling to gain ground against Pritzker. The Bailey campaign has faced recent fallout from controversial comments calling abortion worse than the Holocaust, and referring to Chicago as a “hellhole.”

Phillips has also been critical of Pritzker’s COVID stay-at-home orders and mask mandate. He made no secret of his political support for Bailey during his sermon last weekend.

“See what is being done right now, and how scared the enemy is. And Lord, just like you work through your believers, Satan works through his believers,” Phillips said, offering up a prayer while putting his hand on Bailey’s shoulder.

Cassell has stated publicly that he was visited and questioned by FBI agents about Jan. 6. Neither Phillips nor Cassell are accused of any criminal wrongdoing in connection with their attendance at the Capitol riots.