Even ‘Mother Jones’ helps fire up the rally; all workers need to step up ‘cause it’s our fight’

Collinsville, IL – The key to passing Illinois’ unprecedented Workers’ Rights Amendment in November will be grassroots mobilization of every Labor supporter, speakers at a rally in support of the amendment said at a boisterous rally here Thursday, July 28.

Tim Drea, president of the Illinois AFL-CIO, said this vote is too important to miss in this election, nor to allow “some politician like Rauner” (former Gov. Bruce Rauner) to take away from our children what our grandfathers, fathers and so many others have fought for all these years.

“This is our moment in Illinois history,” he said. “This is THE most important election of our lifetime. This is a constitutional guarantee to protect what we’ve fought for (through the generations.)”

On a lighter note, he said he’s been attending rallies such as this one across the state to fire up support for the Workers’ Rights Amendment, and the big crowd at IBEW Local 309’s hall was the best one yet.

“This is the most fun we’ve had at any of them,” he said. “I always tell people, if you want to get fired up, you have to go to the Metro-East.”

TO MAKE ‘RTW’ ILLEGAL IN ILLINOIS
Chad Goldschmidt, vice president of the Southwestern Illinois Building and Construction Trades Council, called the amendment one of the most monumental pieces of legislation for working men and women to date.

“Now is our time to come together and be heard,” said Goldschmidt, who is also president and business agent for Operating Engineers Local 520. The amendment would protect the right to organize and bargain collectively in the Illinois state constitution, which would effectively make so-called “right-to-work” laws illegal in the state, he said.

To thunderous applause, B. Dean Webb, president of the Madison County Federation of Labor, made the critical point about the importance of this vote to workers.

“Illinois will be the first and only state in America to prohibit ‘right-to-work in our constitution,’” he said. “We’ve got to work our asses off to get our members, family and friends out to vote ‘YES.’”

Scot Luchtefeld, president of the Southwestern Illinois Central Labor Council, called it “the most important legislation in this state for Labor in a long time.

“Look what’s happening in Missouri,” he said. “They are constantly fighting ‘right-to-work” even after voters rejected it because the wrong party is in control of that state. We need to make sure our members understand what’s at stake.”

The amendment gives Illinois a chance to build its strength for the future, he said. “We are the House of Labor, so let’s act like it,” he said. “We have to get our members on board and fight like hell!”

NEEDS 60 PERCENT TO PASS
Last year, the state House and Senate passed joint resolutions to put the amendment on the Nov. 8, 2022 ballot. But it still requires voter approval, and a simple majority won’t do. To amend the constitution, 60 percent of those who vote on the amendment will need to vote yes.

The Workers Rights Amendment will be the first on the November ballot.

Randy Harris, chairman of the Madison County Democratic Party and a Laborers International Rep, noted that just about all of the opposition to the Workers’ Rights Amendment has been from Republicans.

Harris said a ‘Vote No” campaign is likely to be launched soon against the amendment. “This thing is not done,” he said. “The billionaires and trillionaires and corporations are going to come after this amendment. We have got some work to do!”

HOFFMAN: ‘HELL, YES’ NO ‘RTW’ EVER!
One of Labor’s top proponents in the Legislature, Rep. Jay Hoffman (D-Swansea) said he has seen a shift in focus when it comes to the rights and benefits guaranteed to union workers.

Decades ago, he said, when someone saw a worker who had good pay, good benefits and safe working conditions, they would say, “I want a job like that.” Somewhere along the line, he added, it’s shifted to, “Why should he have that? I don’t have it!”

Hoffman said that instead, we need to shift back to union protections that guarantee salaries, working hours and safe conditions.

And it’s Democrats who back Labor issues, ranging from minimum wage to smaller classroom sizes, Hoffman added. When former Gov. Bruce Rauner was in office, he said, “We had to fight every day!”

Passing a phony “right-to-work” law was Rauner’s top priority, Hoffman said, and his sticking to that priority was what kept the state without a budget for two years, at one low point.

“We can’t go back to that,” Hoffman said. “All our brothers and sisters in Labor have to come out and vote for the amendment. Hell, yes! Let’s never have ‘right-to-work’ in Illinois!”

They asked for Labor members not only to vote, but to get their friends and family to vote, too, and to reach out to independents and even Republicans to get them on board.

Belt and Stuart both predicted a bitter fight against misinformation campaigns backed by big money to convince voters that the amendment would worsen inflation or cost jobs.

“One of the things we’ve seen with the other side is that they’re deliberate, and they don’t play by any rules,” Belt said. “It doesn’t have to be factual … they’ll do it.”

Stuart said union representation generally means more equality in an era when women and minorities still are paid less than white men. “We get paid less when we do the same goddamn job,” she said. “That is wrong!”

MOTHER JONES RAISES THE ROOF
One happy surprise at the rally was an appearance, in complete costume and full-throated voice, by Loretta Williams, the actress who frequently and convincingly portrays the great Labor leader Mother Jones.

Speaking as Mother Jones, she reminded the rally attendees of the violence and misinformation that have surrounded past Labor efforts to win concessions from those in power. And she tied it to recent events.

“There’s a tornado coming and you want to go to safety, but you can’t because you’ll lose your job,” she said, referring to last fall’s tornado at the Amazon warehouse in Edwardsville, which killed six workers who had inadequate storm protection. Amazon’s policies for worker safety in the incident still are being litigated in court.

“Mother Jones” declared: “You can’t pay the rent with a gift card! You don’t need a gift card, you need a union card!” She got a rousing standing ovation.

She added, “Illinois is the best damn Labor state in the nation. Rise up, and show the world what the workers can do!”

Meanwhile, the committee formed to pass the Workers’ Rights Amendment has already faced legal challenges and will be striving to educate the public and drum up voter registration and participation. More information about the amendment can be found at workersrights.com. 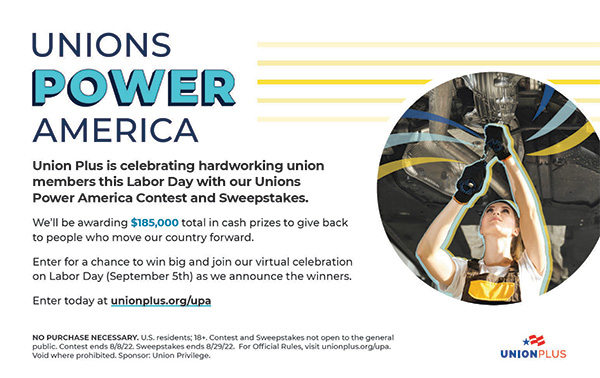