On Tuesday, two items–one from a historical perspective and the other forward-looking–will place the government’s role in creating inequitable and racially segregated neighborhoods, and its ability to correct course, into the spotlight.

The first is a study from Cook County Treasurer Maria Pappas’ office detailing how mid-20th century “federal government-sanctioned housing discrimination” led to “urban decay and the ensuing exodus of Blacks from Chicago and other major U.S. Cities.”

The Pappas study focuses on vacant and abandoned land in Chicago as well as government-owned land in Cook County–controlled by the city of Chicago or Cook County Land Bank Authority–that is offered up at the biannual Cook County scavenger sale at bargain rates in the hopes they’ll be developed and brought back to the tax roll.

It found the “overwhelming majority of vacant and abandoned properties” in Chicago’s South and West Sides and suburbs like Maywood were in areas previously redlined, a practice of carving out neighborhoods with majority Black populations where home mortgage lending was made more difficult. The study also found similar results in Philadelphia and Detroit.

According to the study, over half of the 27,358 properties offered at the 2022 scavenger sale (14,085) were included within the boundaries of the 1940 federal Home Owners’ Loan Corporation map of the Chicago area. This was a New Deal program meant to streamline home refinancing but included maps with racially-driven boundaries that excluded whole swaths of the country’s primarily Black-majority neighborhoods from the lending.

In some South Suburbs, there are “so many homes and businesses” that are vacant that the property tax burden falls on the remaining property owners, driving up “tax rates” to “some of the highest in the nation” while still only yielding “a fraction of the property taxes needed to provide basic government services.”

Pappas’ office suggests replacing the annual scavenger sale with a “fairer, more effective system of restoring distressed properties to productive use” and creating an exhaustive database of city and suburban vacant and abandoned land that could be used by “governments, developers and non-profit agencies working together to rehabilitate struggling neighborhoods.”

Meanwhile, at City Hall, this morning the Zoning Committee will consider an ordinance from Mayor Lori Lightfoot’s Housing Department that seeks to streamline the building of new residential units near transit in wealthy areas. But it’s been scaled back after months of negotiations with the aldermen who represent those wards.

While some neighborhoods of Chicago were left without a chance to build generational wealth through homeownership, other neighborhoods thrived and often received the added benefit of focused city services like good access to public transit.

The ordinance up for consideration looks to tackle that by making it easier to build more housing near transit hubs, both el stops and bus lines, in those wealthy neighborhoods. Dubbed the “Connecting Communities Ordinance,” the measure was put forward by Lightfoot’s Housing Department and co-sponsored by Alds. Walter Burnett, Jr., 27th,  Maria Hadden, 49th, Michael Rodriguez, 22nd, and Daniel La Spata, 1st.

It melds together tweaks to the city’s municipal ordinance and zoning code in hopes to streamline the building of new affordable housing, both subsidized and what’s termed “naturally occurring” affordable units like those in three- and four-flats as opposed to comparatively pricier single-family homes.

But since the ordinance was introduced, it received quiet pushback from aldermen on the North and Northwest Sides deeming it unworkable for their residents.

Changes made to accommodate them included getting rid of an effective ban on single-family-only zones within a half mile of CTA or Metra stops or within a quarter mile of high-use bus stops by allowing three flats to be built without needing a zoning change, which almost always requires the approval of the local alderman.

But the expansion of the city’s equitable transit-oriented development goals remains in the ordinance, allowing developers to bypass building costly on-site parking minimums near the expanded transit hub footprint.

Another change is a provision that extends the time that allows an affordable housing project to receive a vote if–at the local aldermen’s request–a zoning change to accommodate the project has been stalled in the Zoning Committee from 180 days to 300 days.

It also removes an item that would require a zoning change to build a single-family home near transit hubs in some of the wealthiest areas of Chicago, what the city classifies as “inclusionary areas” under its affordable housing ordinance. The requirement remains for gentrifying districts, classified as preservation areas, highlighted in the map below. 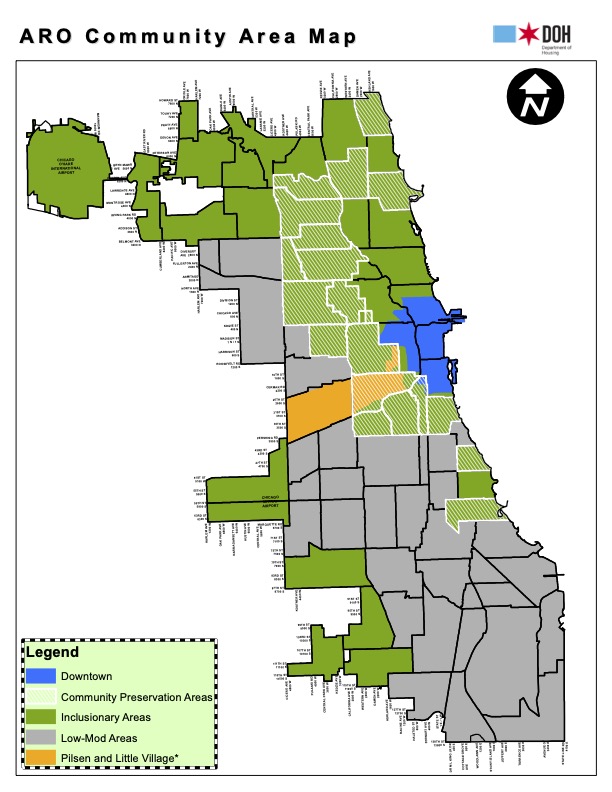 In a sign the administration is gearing up for a close vote, the Housing Department is holding a City Hall press conference at 9 a.m. ahead of the Zoning Committee an hour later.