WASHINGTON, D.C. (CBS) – After President Joe Biden signed the new bipartisan gun safety bill on Monday in response to several recent mass shootings, he acknowledged there is still work to be done.

CBS 2’s Tim McNicholas traveled to Washington, D.C. to speak with gun control advocates who have promised to hold the president to his word.

During the bill signing ceremony, Biden addressed a crowd gathered on the White House lawn for what was considered a celebration of the Safer Communities Act.

The new law was passed on June 25 in the wake of mass shootings in Buffalo, New York, and Uvalde, Texas.

"I know public policy can seem remote, technical and distant from our everyday lives but because of your work, your advocacy, your courage, lives will be saved today and tomorrow because of this," Biden said.

But in the 16 days since the bill was passed, the nation is again reeling from the deadly shooting at the Highland Park Fourth of July parade. 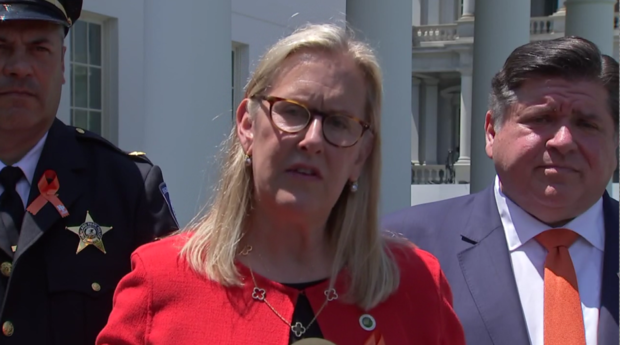 Highland Park Mayor Nancy Rotering and Gov. JB Pritzker were in Washington, D.C. on Monday to speak with President Joe Biden about the need to do more to address gun violence in the wake of several mass shootings across the country. CBS

Highland Park Nancy Rotering was also at the White House on Monday besides Gov. JB Pritzker.

"We in Highland Park banned assault weapons nine years ago, but we need the rest of the country, obviously, to catch up with us," Rotering said. "The fact that guns in these shootings are legally obtained says that these law need to be changed. But most importantly, weapons designed for combat need to be removed from the streets of the United States."

Pritzker also echoed the message that communities are not safe with powerful weapons on the streets.

"These are combat weapons," the governor said. "These are weapons of war. They should not be on the streets. When I talk to police … they’ll tell you that these bullets, and this weapon can rip right through Kevlar. So a police officer is not safe with these weapons on the street. We want them to be safe. We want our communities to be safe." 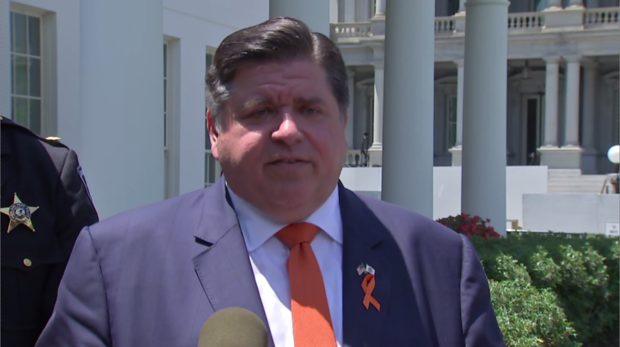 Gov. JB Pritzker and Highland Park Mayor Nancy Rotering expressed their desire to see Congress do more to address gun violence, including a ban on assault weapons and high-capacity magazines, when meeting with President Joe Biden on Monday. CBS

The governor added that he and Rotering expressed their desire to see Congress do more to address gun violence, including a ban on assault weapons and high-capacity magazines.

After meeting with Biden, Rotering and Pritzker vowed to continue applying the pressure on federal lawmakers.

Rotering said she will return to Washington on July 20 to meet with the Senate Judiciary Committee where she hopes to further discuss a national ban on assault weapons.