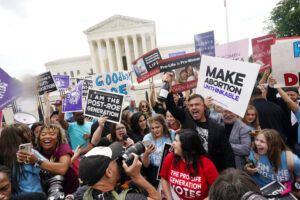 WASHINGTON — The Supreme Court has ended constitutional protections for abortion that had been in place nearly 50 years — a decision by its conservative majority to overturn the court’s landmark abortion cases. Friday’s outcome overturning Roe v. Wade is expected to lead to abortion bans in roughly half the states. The decision, unthinkable just […]

The post lllinois reacts to the overturning of Roe v. Wade appeared first on Illinois Newsroom.