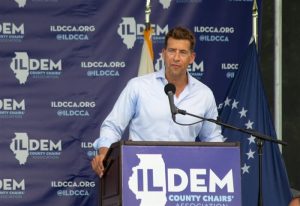 Former state treasurer Alexi GIannoulias is pictured at a Democratic County Chairs’ Association event in Springfield last year. He is running for the Democratic nomination for secretary of state in 2022. (Capitol News Illinois photo by Jerry Nowicki)

Illinois voters might know Alexi Giannoulias as the state’s treasurer from 2007 to 2011, or they might know him as the Democratic nominee for U.S. Senate who lost to Republican Mark Kirk in 2010.

He’s now looking to get back into public life as he runs for secretary of state, an office is best known for its public-facing driver services facilities. The office also oversees state libraries, securities enforcement, and the state archives among other tasks. It has about 4,000 employees and a $600 million all-funds budget.

Now was the time to pursue an elected statewide office, Giannoulias said in a Zoom interview with Capitol News Illinois this week, because he’s considering it from his family’s perspective.

He said his plan for the secretary of state office will be “centered on modernization.”

“Everything that we’re going to do is gonna be based on making life simpler for Illinoisans across the state,” he said. “People are paying too high of what we call a time tax. Just to use simple government services, people are waiting hours in line, they’re stuck on the phone.”

He’s proposed an appointment-based “skip the line” feature at driver services facilities, as well as creating a mobile app, increasing online capabilities and implementing electronic IDs in some capacity.

He also proposed hiring “advocates” to be on hand in driver services offices for individuals who need help navigating the system.

“We want to make sure we have hands-on assistance for these folks, but especially for our seniors,” he said, adding that they would also help those facing language barriers.

Since leaving the treasurer’s office in 2011, Giannoulias has held other public service roles, such as serving in an unpaid capacity on the Illinois Board of Higher Education and as chair of the Illinois Community College Board. He also taught a political science course at Northwestern University and served on the Chicago Public Library board of directors.

From 2012 to 2018, he held a job in wealth management at the Chicago office of Bank of New York Mellon, and in 2019 he announced the formation of his own private investment company, Annoula Ventures.

Annoula Ventures, he said, was “just a private vehicle where I invest in companies,” but he said he wouldn’t continue involvement if he is elected secretary of state. His LinkedIn page described Annoula ventures as investing in small companies in the areas of real estate, hospitality, insurance and early-stage tech.

“Having a different perspective, and bringing that to Springfield, I think, is enormously valuable,” he said. “So being state treasurer, being the only one who’s held a constitutional office is an important perspective, provides valuable experience.

Giannoulias counts labor unions, such as the Laborers’ International Union of North America, the Illinois Federation of Teachers and the Service Employees International Union, as the “backbone” of his campaign. He also has endorsements from a long list of state lawmakers and six sitting members of Congress.

Valencia has the endorsement of the state’s top Democrats, including Gov. JB Pritzker and U.S. Sens. Dick Durbin and Tammy Duckworth. She’s also endorsed by outgoing secretary Jesse White, who has held the office since 1999.

The campaign between Valencia and Giannoulias has been contentious, with Giannoulias hitting Valencia on her husband’s lobbying ties. Her husband, Reyahd Kazmi, lobbies the city of Chicago and is also registered with the secretary of state to lobby Illinois lawmakers and the governor.

Valencia, meanwhile, has repeated allegations about Giannoulias’ family’s now-defunct Chicago financial institution which dogged him during his Senate campaign.

Namely, those are that Giannoulias was a loan officer at his family’s Broadway Bank when it gave out questionable loans to convicted felons and organized crime figures, as reported by the Chicago Tribune during his Senate campaign.

Giannoulias has described Broadway Bank’s trouble as resulting from the Great Recession, which ultimately led to its dissolution. The Chicago Tribune reported that Giannoulias said he was proud of the community bank’s efforts and its collapse marked “a very difficult time.”

Despite the frequent attacks between the two fundraising frontrunners, both Giannoulias and Valencia told Capitol News Illinois this week they would endorse each other in the general election should the other gain the nomination.

The secretary of state’s office also oversees lobbying registration in Illinois, and Giannoulias said he’d look to work with lawmakers to strengthen that oversight authority. That includes giving state inspectors general greater investigatory and subpoena power, prohibiting elected officials of any office from lobbying any other elected body, and creating a broader lobbying database.

“People have lost trust in their elected officials,” he said. “They’ve lost trust in government. And the scandal and corruption, the pay-to-play, people are sick and tired of it. And I think now’s an ideal time for people to step up and try and be leaders and help move our state forward.”

The full conversation with Giannoulias is available on the Capitol News Illinois Capitol Cast podcast,