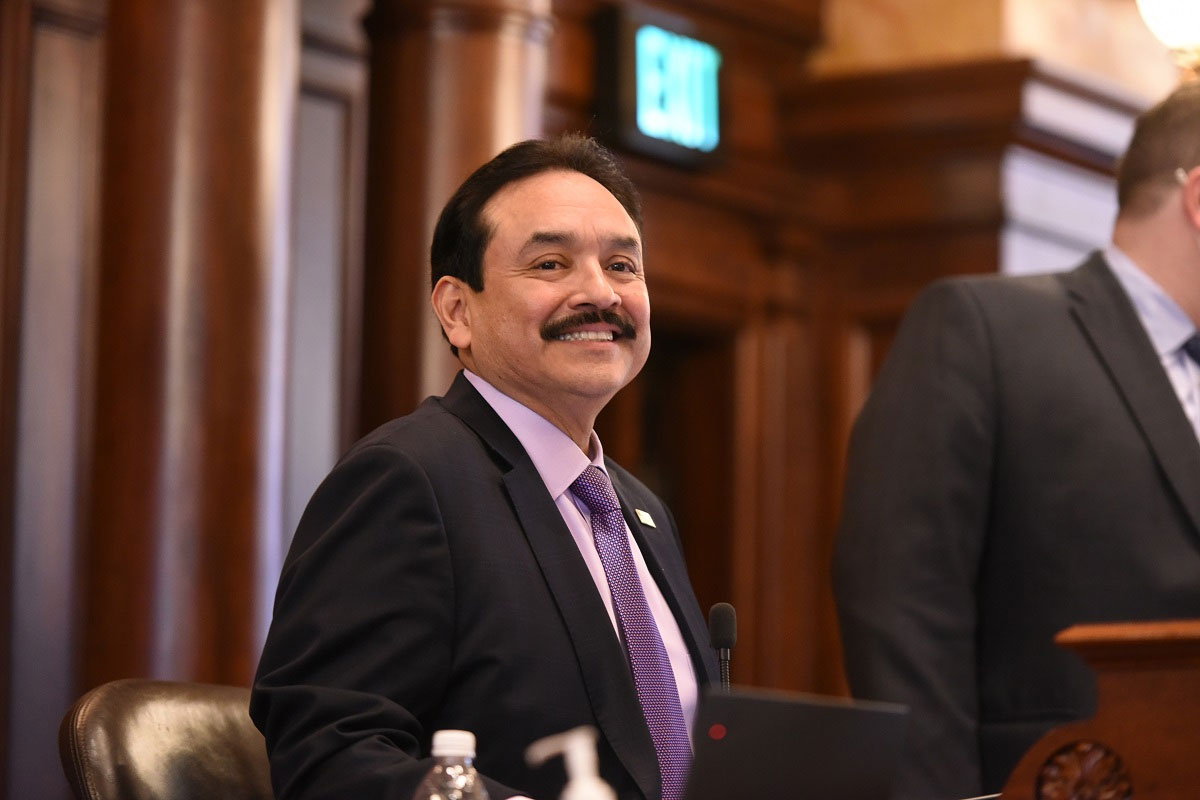 CHICAGO – After more than two decades serving the 1st Senate District, Assistant Majority Leader Antonio “Tony” Munoz (D-Chicago) will finish his career at the end of the 102nd General Assembly.

Growing up in the Pilsen and Little Village communities, Munoz knew he wanted to better the lives of his family and others at an early age.

“I was taught at a young age that hard work and determination is the key to success,” Munoz said. “I have applied this to everything I have accomplished, especially as a state senator.”

Munoz joined the Senate in 1999, serving as assistant majority leader since 2009. Over the years, he has sponsored nearly 2000 bills, with more than 800 signed into law. In addition, Munoz has chaired the Licensed Activities, Transportation, Executive Appointments and Veterans Affairs Committees.

Practical legislation rather than political agendas has marked Munoz’s tenure in Springfield. He is well known as a Senator who can work with members on both sides of the aisle.

Forty years ago, Munoz served in the United States Army with the 82nd Airborne Division. Munoz maintained his fight for the armed forces and veterans throughout Illinois by spearheading laws that ensure military service members have rights and protections. A veteran himself, Munoz worked to give them every opportunity available when returning to civilian life and having sufficient resources for their mental and physical health. In 2021, Munoz was appointed to the Veterans’ Advisory Council to review and study the most significant issues and concerns that Illinois veterans face and advises the Illinois Department of Veterans’ Affairs on how to address the issues and concerns.

As a former Chicago police officer, Munoz saw firsthand that crime and gang activity were tearing apart his community. Over the years, he worked to keep children in school and off the streets by fighting for funding for after-school programs. He also passed a law making it a crime for street gangs to recruit on school grounds and making it illegal for a sex offender to live within 500 feet of a school, park, daycare, or child facility. In addition, Munoz co-sponsored and supported historic legislation that overhauled the state’s education funding formula to provide fair funding for all schools and was the lead sponsor to give in-state tuition to all students residing in Illinois.

“When I look at the youth in our community, I remember what I was taught in the military and I want to remind them that ‘motivation and dedication are the keys to graduation,” Munoz said.

Munoz has been a strong advocate for law enforcement officials and their families. During the 101st General Assembly, he expanded the use of Police Memorial grant dollars to include scholarships for spouses of fallen police officers. The Illinois Police Officers Memorial in Springfield bears the names of officers who made the ultimate sacrifice while serving their communities, including Munoz’s partner, Don Marquez.

“Seeing my CPD partner’s name on the memorial is a distinct reminder to support the families of officers who made the ultimate sacrifice,” Munoz said.

A longtime advocate for extending state procurement opportunities to minorities, women, veterans and people with disabilities, Munoz has been a strong supporter of increasing the minimum wage numerous times and supported the ratification of the Equal Rights Amendment. He sponsored a notable measure that requires an employer or employment agency to wait until an applicant has been selected for an interview or until after a conditional job offer has been extended before inquiring about, considering or requiring disclosure of criminal history to give applicants every opportunity. Additionally, Munoz negotiated and sponsored numerous professional regulations to ensure that people performing services are properly regulated and provide Illinoisans with quality services.

Munoz is co-founder of the Latino Caucus, which consists of members in the Senate and the House of Representatives. The caucus is dedicated to bettering the lives of Latinos by working to develop and pass legislation that has a positive impact on the lives of the over two million Latinos living in Illinois.

“My grandfather, who came here from Mexico, instilled a strong work ethic in me,” Munoz said. “Everything he taught me has led me to where I am today.”

For the people living in the 1st Senate District, Munoz always advocated for his constituents’ needs. Over the years, Munoz hosted annual holiday drives, handing out turkeys and children’s toys. He also organized numerous fishing derbies, health and back-to-school fairs, took seniors to the White Sox stadium and led dozens of other community events.

Despite his many successes, Munoz considers his best achievement to be his family. He and his wife Patricia raised three children and have welcomed five grandchildren. Munoz’s plans include supporting the causes he is passionate about and spending more time with his family.

“It has been an honor serving as state senator to the 1st District,” Munoz said. “I want to thank everyone who has supported me throughout this journey and the residents who put their trust in me for more than two decades. As I finish out my term, I promise to continue listening, advocating and working for the people of the 1st District.”