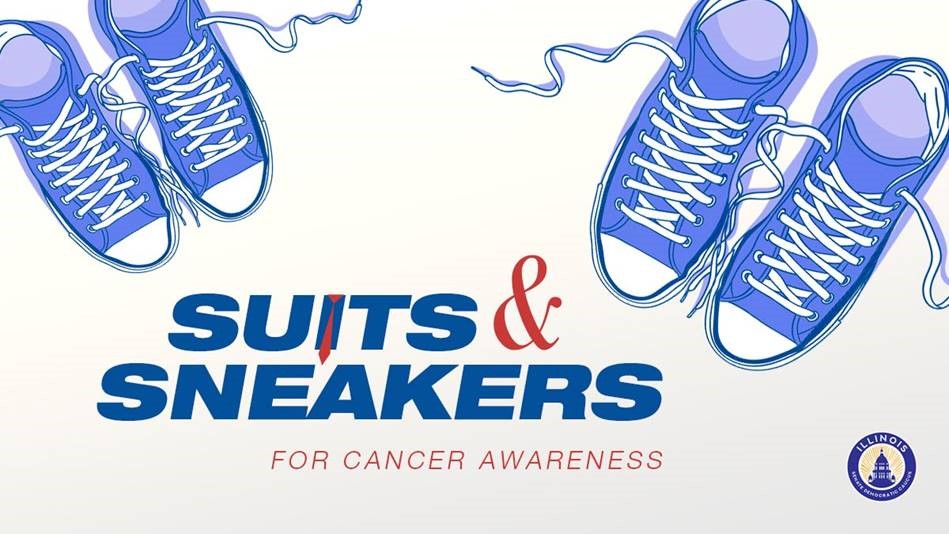 SPRINGFIELD – During their final week of legislative session, the Illinois Senate Democrats traded in their dress shoes for sneakers to raise awareness to cancer.

“I can’t emphasize enough how important it is to get screened regularly,” said State Senator Laura Ellman (D-Naperville). “I waited 15 years to get screened and I wish I wouldn’t have. Making and keeping those appointments can feel inconvenient, but they’re much less inconvenient than receiving a cancer diagnosis that could have been caught sooner.”

Coaches vs. Cancer is a collaborative nationwide annual event in which the American Cancer Society and the National Collegiate Athletic Association team up to bring awareness to cancer, which is among the leading causes of death worldwide, by wearing sneakers with their suits during games.

Illinois legislators followed suit Wednesday, wearing sneakers with their formal attire while conducting their business on the Senate floor to advocate for cancer resource expansion, research and support –initiatives the caucus has advanced through a number of measures.

“As Chair of the Senate Health Committee, one of my top priorities is encouraging people to become more educated on cancer prevention, screening and early detection,” said State Senator Julie Morrison (D-Lake Forest). “The Suits and Sneakers event helps to raise visibility and support for the American Cancer Society’s work in a fun way.”

Many organizations have used similar efforts to join the campaign and help raise funds for cancer education, prevention, screening and detection materials. Though cancer affects all populations, a variety of factors cause certain groups to bear disproportionate burdens with respect to the prevalence, mortality and financial costs of cancer. Illinois Senate Democrats, who have championed noteworthy equity packages in areas such as health care, justice reform and economic access, joined these efforts this year to take a stand against factors prohibiting cancer treatment and prevention.

By joining the fight against cancer, Illinois Senate Democrats commit to identifying and limiting new cases to better serve the people they represent and increase Illinoisans’ chances at a safe and healthy life.