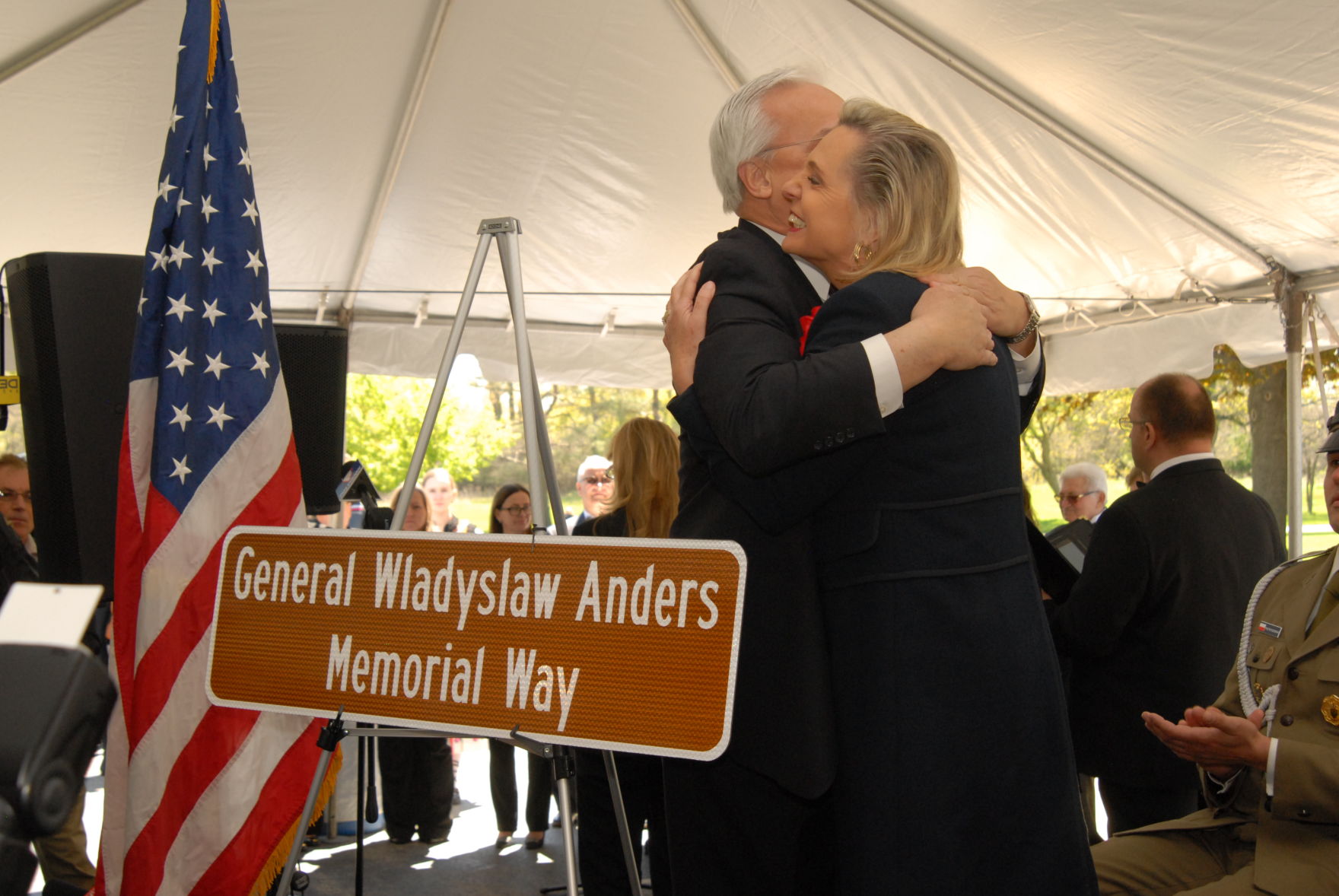 Mayor Andrew Przybylo hugs Anna Maria Anders whose father, a significant figure in Polish and world history, was recognized by the state of Illinois and village of Niles with an honorary renaming of a portion of Milwaukee Avenue in Niles at a ceremony in Maryhill Cemetery in May 2017. Anna Maria Anders is a senator in the Polish government.

For many years portions of Milwaukee Avenue from Chicago’s Northwest side into the village of Niles were unofficially known as the Polish corridor. Legislation that passed the Illinois House and was introduced in the Illinois Senate would make that designation official.

Under the proposed Milwaukee Avenue Polish Heritage Corridor Act, the Polish corridor would run along Milwaukee from N. Sangamon Street, near Erie Street in Chicago’s River West neighborhood, to Greenwood Road near Golf Mill in Niles.

The bill, which lists State Rep. Brad Stephens (R-20th) as a co-sponsor, passed the Illinois House with 105 “yeas” and zero “nay” votes on March 3, and was introduced in the Illinois Senate the next day.

“The Polish American community in the 20th District and Chicagoland have enriched our communities for generations,” Stephens said in a written statement. “I’m glad this corridor will run through the 20th District and will recognize the cultural and historic contributions of the Polish American community in the Chicagoland area, particularly in Niles and Schiller Park. I look forward to seeing this bill move through the Senate and signed into law to make this important designation in our communities.”

Members of the Alliance of Polish Clubs of the USA unveiled a new towering black monument in 2012 at the Katyn Memorial in St. Adalbert Cemetery in Niles, commemorating 96 victims of a 2010 plane crash that was in route to observe the 70th anniversary of the Katyn Massacre in Russia. (Journal file photo)

A joint resolution was adopted by both the Illinois House and Senate in March 2017 designating a stretch of Milwaukee Avenue from Main Street to Dempster Street as “General Wladyslaw Anders Memorial Way”. General Anders led troops in World War II, many of whom are buried in Maryhill Cemetery in Niles.

A second section of Milwaukee Avenue near Harts Road, and St. Adalbert Cemetery, south of Touhy Avenue was officially named for Wojciech Seweryn, designer and creator of the Katyn Massacre Monument in the cemetery in 2011.