The state’s collections since early 2020 now outpace that raised from booze sales. The money has been used on everything from buying an opioid reversal drug to funding a Girl Scouts program to fight human trafficking.

With hefty taxes, an eighth of an ounce of fresh cannabis flower typically costs around $80 — far more than the price of black market weed.

But sales have continued to boom despite the sky-high taxes and prices, totaling over $1.9 billion since the drug was fully legalized last January. As a result, total tax collections on pot sales have now jumped to nearly $563 million. And since February, pot sales have brought in a whooping $100 million more in taxes than booze.

Nearly a quarter-billion dollars has been raised on pot sales through November mainly via the state’s 6.25% sales tax and other local taxes, according to Gov. J.B. Pritzker’s office. Pritzker spokeswoman Charity Greene couldn’t provide a breakdown of those revenues.

However, the bulk of the state’s weed windfall, $319 million, comes from an additional excise tax of up to 25% per purchase, depending on the product. That funding, along with nearly $30 million in fees paid by marijuana businesses, makes up the state’s Cannabis Regulation Fund, which is also the main source of money being used to help achieve some of the legalization law’s social equity goals.

So where has that money gone?

Perhaps most notably, $134.1 million is financing two programs aimed at investing in communities hardest hit by the drug war and funding mental health and drug treatment initiatives. A similar amount has been deposited into the state’s general revenue and budget stabilization funds. And more than $60 million more has been used to cover administrative costs, fund local governments, facilitate the sweeping cannabis expungement process, finance a public education campaign on substance abuse and research the impact of cannabis legalization. 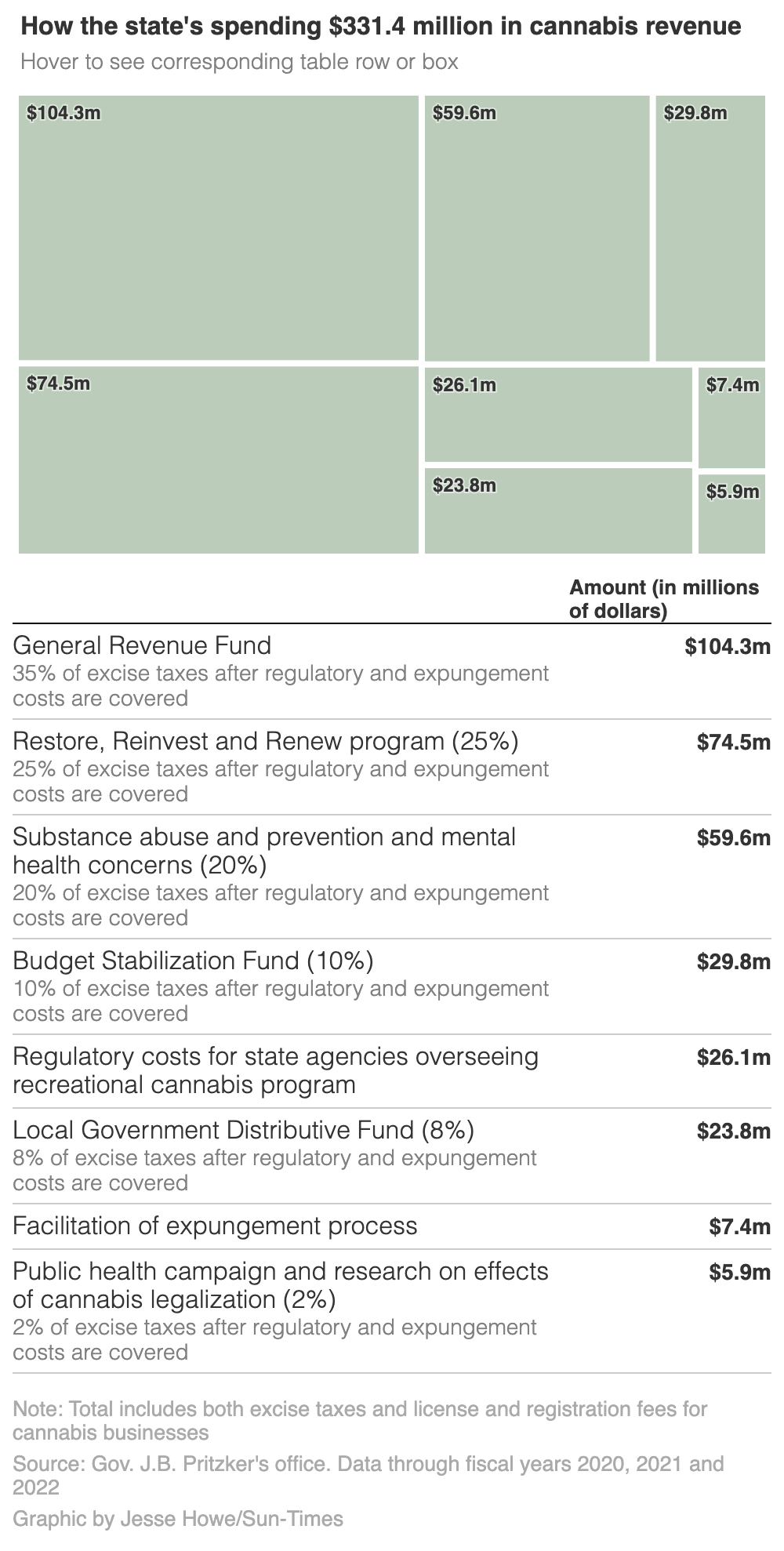 It’s “fixing a problem that the previous law — having it illegal — created,” he said.

The Restore, Reinvest and Renew program gets a quarter of the excise taxes and fees after administrative and expungement costs are covered and serves as a cornerstone of Pritzker’s plan to use cannabis legalization to create social equity and advance restorative justice efforts.

The so-called R3 program got off to a slow start that state officials attributed to receiving a deluge of grant applications. But in January, over a year after recreational weed was legalized, that money began to flow to local governments, businesses, nonprofits and other organizations.

So far, $67.3 million has been dedicated to funding grants supporting communities adversely affected by disinvestment, violence and drug war-era policies that disproportionately impacted minority communities. About half the grant money has already been disbursed, according to the governor’s office and documents provided to the Sun-Times.

One grantee, Derek Brown, grew up in North Lawndale during the height of the crack epidemic, charting an all-too-familiar course for kids raised on Chicago’s South and West sides. Nicknamed “Shotgun” earlier in his life, Brown said he joined the Vice Lords when he was 13, went to the penitentiary at 17 and was shot two years later.

Brown, 45, said he eventually had an epiphany in 2009 as he sat watching a group of kids “going down the same destructive path.”

“Those babies were doing the same thing that I was doing,” he said, “and I had to do something.”

So he started Boxing Out Negativity, a boxing program that operates out of a gym near 16th Street and Pulaski Road and aims to “empower at-risk youth to realize the best within themselves in a safe and supportive environment,” according to its mission statement.

In July, Brown’s program was among 21 organizations that received $3.5 million in R3 grants to combat the historical uptick in violence during the summer months.

Brown said his organization used the nearly $200,000 it received for gang intervention efforts in North Lawndale that were “bigger than the boxing program.” The work was much needed: city data shows the neighborhood has seen at least 43 homicides so far this year, up from 39 all of last year and 23 in 2019.

Brown noted that his team helped mediate more than 100 conflicts, including a longstanding beef between gang factions that ultimately reached a treaty. A mental health specialist also held weekly appointments and business owners offered some kids job opportunities, he said.

“This is the first time the state ever went to this level,” he said of the targeted grant funding.

While the summer violence grants have ended, the other programs that received much of the R3 money are being extended as part of a separate funding round. The diverse list of dozens of grant recipients has provided a range of services, like supporting survivors of police torture and the previously incarcerated and offering legal aid services to help renters avoid and fight eviction.

The Girl Scouts of Northern Illinois, for example, has even received nearly $250,000 to fund a Rockford program that trains elementary and middle school-aged girls to build relationship skills and “to identify signs or potential danger around human trafficking,” said Emma Eschenfeldt, the organization’s director of community programs.

Jarmese Sherrod, a South Side native who now lives in central Illinois, has used over $100,000 in grant money to fund violence prevention, youth development and reentry programming in Macon County.

Growing up in the Gresham neighborhood, Sherrod said there was “constant violence” as she recalled having to cross through gang territories just to go to school or the store.

“I am elated at the opportunity to receive funding to help solve the problem, and I always tell people that this is my solution,” she said, adding that R3 funding has allowed “regular community leaders to make a difference.”

Sherrod, whose sister is a Chicago police detective, said she wants the program to help create a “positive relationship” between kids in the community and the cops who serve them. She said she hopes to eventually expand to Chicago and has reached out to Mayor Lori Lightfoot and David Brown asking for his help.

“With every success that I have in another city, I try to bring it back home,” she said.

The Chicago Urban League has also received nearly $3.7 million through the program, including more than $180,000 that’s being used to fund the nonprofit’s South Side Community Reparations Coalition.

The coalition’s work will culminate in recommendations on how to use future R3 funding to address the effects of structural racism and “inform community level reparations” in 10 South Side communities, according to a presentation provided to the Sun-Times.

Ahead of its final report, expected in June, the coalition is hosting community meetings, conducting interviews and reviewing literature on reparations and “the unique oppression faced by South Side residents,” according to a planning document.

“I think that’s a really important part of reparations, is simply acknowledging the harm that has been done and hopefully apologizing for it,” she said.

Another 20% of the cannabis excise taxes and fees is being funneled into substance abuse and prevention efforts and mental health concerns. The flood of nearly $60 million in additional resources so far comes as the country’s opioid crisis rages on and as many Illinoisans grapple with mental health issues amid the pandemic.

Of that money, at least $18 million has been sent to a range of contractors. The largest payment — $7 million — went to the manufacturer of Narcan, a naloxone nasal spray used to treat opioid overdoses.

A spokeswoman for the Illinois Department of Human Services, which handled the procurement, didn’t respond to questions about the contract or how the medication is being doled out. Assal Hellmer, a spokesman for Narcan’s parent company Emergent BioSolutions, explained that government agencies are provided a “discounted, public interest price” on Narcan but didn’t respond to further questions.

“These programs make it possible for vulnerable at-risk populations to receive naloxone, through hospital or ER discharge, or through the criminal justice system, local law enforcement, and other state-funded initiatives and community-based organizations,” Hellmer said.

The Chicago Community Trust, a community foundation with billions of dollars in assets, received another $6 million to fund grants under a state-led “racial healing” initiative. And multiple hospitals have also earned funding, including the embattled Loretto Hospital, which got $7,729. A spokesman didn’t respond to questions about how it’s being spent.

“Cannabis presents a new resource to invest in programs that would not be getting funding from anything else,” said John Kagia, chief knowledge officer at the cannabis research firm New Frontier Data.