The I-74 bridge spanning the Mississippi at Rock Island

Though Christmas isn’t until next month, officials from Chicago and Springfield to Washington D.C. are opening their presents this week—the presents being the billions and billions of dollars in physical infrastructure projects that Congress now has sent to President Joe Biden for his grateful signature.

Some of what we’re getting from the $1.2 trillion measure is pretty well known, while other parts will be dispensed via competitive bidding among the states and cities in years to come. But all will be appreciated by local officials who never have enough for infrastructure to meet the need.

In a statement, Rep. Bobby Rush, D-Chicago, laid out some of the top line: $9.8 billion for Illinois roads and bridges alone, $1 billion for Illinois clean water projects, and $70 billion for public transit nationally, of which the Chicago Transit Authority, Metra and Pace surely will see billions for various capital projects.

Particularly worth watching in months and years ahead are the CTA’s proposed extension of its Red Line south to the city limits, replacement of lead water pipes in the city and some suburbs, money for electric-vehicle charging stations that will complement Gov J.B. Pritzker’s move to lure that industry to Illinois, and tens of billions of dollars for Amtrak, which has laid out plans for a huge increase in train service out of its Chicago mid-America hub.

All those will get a jolt—on top of the money for roads and bridges. The only question is how much.

As expected, every Democratic member of the Illinois congressional delegation voted for the package, as did insurgent Republican Adam Kinzinger of Channahon. But particularly notable in his “no” was Rep. Rodney Davis, R-Taylorville.

Davis tied his vote to the progress Democrats made on the companion human infrastructure bill: money for child and senior care, low-income housing and other social needs.

“I’m beyond disappointed that President Biden and Democrats in Congress paired bipartisan infrastructure investment to their reckless, multi-trillion-dollar, tax-and-spending proposal,” Davis said in a statement.  “At a time when inflation is persisting and the prices of goods and services continue to rise, we cannot afford pouring over $3 trillion of new government spending into the economy, particularly after the Democrats passed their nearly $2 trillion spending bill earlier this year.” 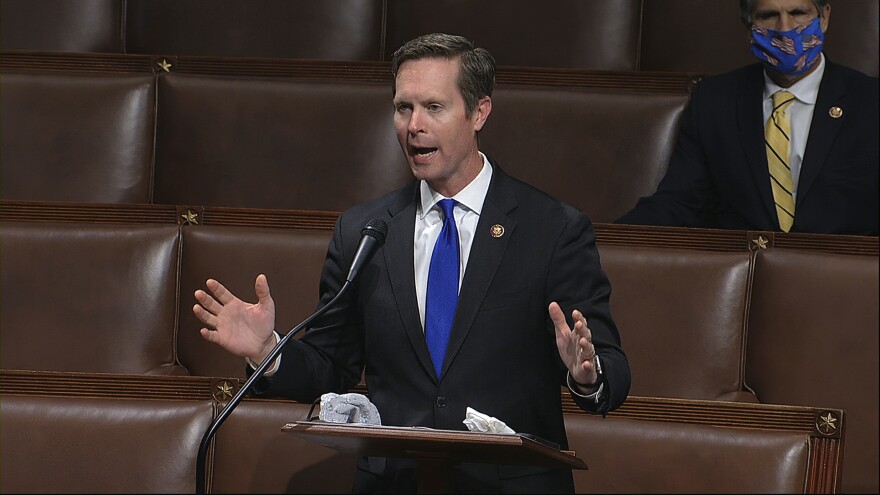 That was an odd statement from an official who, if Republicans retake control of the House in the 2022 elections, is likely to become chairman of the House Transportation Committee. That position will give Davis huge sway over how some of the just-passed money will be spent. Is he going to turn it down and reject funds for Illinois and his district (assuming he runs for re-election)?  Somehow, I suspect not.

Davis’ position is particularly interesting given that other, GOP-leaning groups were all for the infrastructure bill. Like the U.S. Chamber of Commerce, which termed it “a major win for America.” Or the American Council of Engineering Companies of Illinois, whose president, former Illinois House GOP Chief of Staff Kevin Artl, praised the “once-in-a-generation investment” as a vehicle for job and economic growth.

But perhaps Davis is more focused on getting re-elected in a new district right now. He is right about one thing: The companion, larger measure is no sure bet. Look for lots more Democratic squabbling in weeks to come.

My colleague Dan Vock, author of the weekly D.C. Memo every Wednesday, points out that another GOP congressman, U.S. Rep. Darin LaHood, was also a "no" vote. The Peoria Republican, whose father was Transportation secretary under President Barack Obama and usually a big proponent of infrastructure spending, offered basically the same explanation as Davis.

Meanwhile, the latest version of the plan heading to Biden’s desk would pretty much abolish the $10,000 cap a GOP Congress imposed on the state and local tax deduction, known as SALT. Undoing that cap has been a top priority in states like Illinois, California and New York; we’ll be watching in the week ahead for details.

Elsewhere, look for Pritzker to sign the state’s new congressional map into law this week.  You finally may see a city ward remap plan from the City Council rules committee. And Mayor Lori Lightfoot’s office is expected to release more details on the five bids to build the proposed Chicago casino.

Pritzker, Illinois Senate President Don Harmon and House Speaker Emanuel “Chris” Welch will be back in the country after their U.K. trip to tout Illinois’ green bona fides at the climate conference there. By the looks of a tweeted pic of the trio quaffing a few, they had a good time. 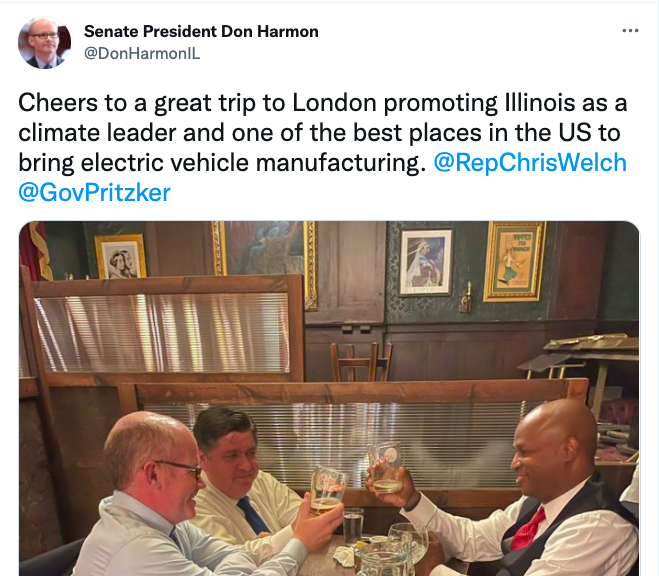