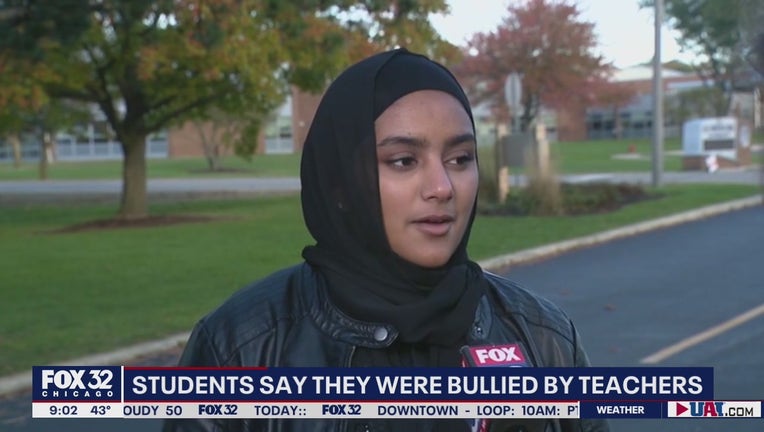 LISLE, Illinois – The Lisle school board is investigating after a student says she was harassed by a teacher because of her hijab, and forced to listen to racist comments.

She said she was subjected to a 25-minute racially charged rant from a teacher on October 12. Shaik shared her story at the Lisle school board meeting Monday night, where she was joined by dozens of classmates there to support her.

"An instructor brought politics, racially and religiously charged topics, into a classroom setting that were directed toward me, the only hijab-wearing student currently attending Lisle high school," Shaik told board members.

She said when she complained to school officials, she was told there is no policy to deal with such incidents.

She said she decided to attend the school board meeting "not to relive the horrible events that took place in that classroom, but to make a demand for immediate implementation of policies and programs to prevent discrimination and bullying from happening again ever to me or any other student attending the school now and in the future."

After Shaik’s remarks, another student and a parent got up to share similar experiences.

A Jewish student said another student told her there should be another Holocaust, and they should start with her family.

She reported the remarks to the school but they did not take action.

"There is definitely a pattern," she said. "It’s a systemic problem. There’s a lot of teachers that do make these remarks and there’s nothing that has been done about it."

The school board president told the students: "You have our attention. This is serious," and promised to reach out to the students for more information.

FOX 32 Chicago reached out to the Lisle District 202 superintendent’s office for comment but were told the superintendent was not available.