Bipartisan bills pending in the Illinois Legislature would add Illinois to the 34 other states in the Nurse Licensure Compact (NLC), which allows nurses to practice across state lines without having to get a nursing license in each and every state.

“It’s time for Illinois to join in this effort to improve and streamline health care nationwide,” said John Heraty, LCSW, public policy liaison with the Case Management Society of America-Chicago (CMSA). “We call on the Illinois Senate and House to pass the critically important NLC legislation and urge Gov. J.B. Pritzker to sign it.”

NLC legislation was introduced in Illinois over 10 years ago. “The problem is basically Illinois politics. Most legislators think the Compact is a great idea but convincing them to pass Compact over the opposition of AFL-CIO is another thing. The pattern in the House is the same every year. Illinois Nurses Association (INA) and the National Nurses United (NNU), both nurse unions, behind the power of AFL-CIO, vehemently oppose Compact; The House leadership falls in line with the union and refuses to allow NLC to be voted on; NLC bill dies in committee.” Heraty said. “We have recorded testimonies from nurses’ union members who favor the licensure compact,” he said. “They see how it would benefit them.”  Open support from union nurses is huge as many union nurses don’t want to publicly state opinions contrary to union platform. Wendy Jaffe, RN, long time union nurse and staunch union supporter emphasizes: “I’ve seen both sides of this argument and I’m strongly in favor of NLC passage. The NLC clearly is a great health care benefit for all patients and all nurses.” 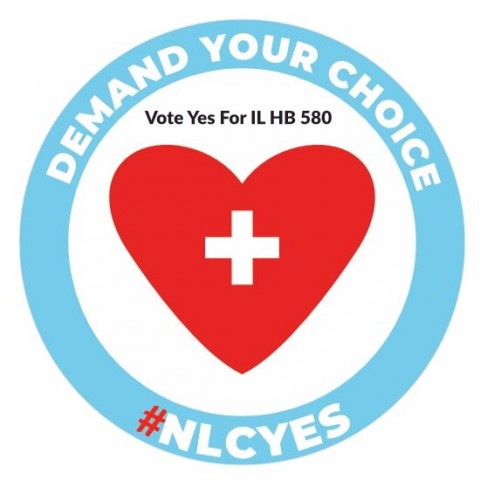 What is the NLC?

The Compact allows nurses to practice nursing across state lines, with a multi-state license, instead of having to get a new license in each state. An Illinois nurse would need to be licensed in Illinois to get a multi-state license to practice in Compact states. The union’s default argument and rallying cry has always been that NLC will make strike breaking easier. This argument doesn’t have any substance or basis in reality. Recent nursing strikes in Illinois have demonstrated that hospitals can already quickly replace striking nurses. NLC bill language clearly states “… Compact does not supersede existing State labor laws. “ The NLC is about increasing nursing employment opportunities and being patient centered. “Unions need to be viewed as part of the health care solution and not as an obstacle to health care delivery in these critical times.” Heraty said.

In addition to CMSA-Chicago, NLC has the support of the National Council of State Boards of Nursing, American Nurses Association-Illinois (ANA-Illinois), Illinois Department of Financial and Professional Regulation (IDFPR), National Patient Safety Foundation, Citizen’s Advocacy Center,  National Governor’s Association for Best Practice, nearly all nursing schools and many more professional and governmental organizations. All of the states surrounding Illinois already participate in the licensure compact.

At the start of January 2020, virtual medical appointments, or telehealth, accounted for less than one percent of all doctor’s visits. By April 2020, it was more than two-thirds of the total. Now in May 2021, in our new digital and hybrid world, it is even greater. Changes in health insurance including Medicare, Medicaid, Veteran’s Administration (VA), private insurance, have opened telehealth to more Americans than ever and there will be no going back.

Many of our historically marginalized communities not only have “food deserts,” but also “health care deserts.” These communities do not have access to an adequate number of health care practitioners and nurses. CMSA-Chicago, Past President, Eric Bergman, RN, said, “The failure to pass the Nurse Licensure Compact is harming Illinois residents. Health care disparities, which have existed for decades, have been laid bare by the COVID pandemic. One reason for the disparities is unequal access to high quality health care. The last year has proven that telehealth can fill some of that gap.” “The NLC is vital to giving every patient the care they deserve wherever they may live geographically,” emphasized Colleen Morley, RN, President-CMSA-Chicago.

Currently, Illinois-licensed nurses who practice telehealth outside the state of Illinois are faced with enormous administrative burdens. The union continually downplays the administrative and financial costs involved in nurses having to apply individually for licenses in each compact state nurse practices. The reality is the accumulated cost and time can be crippling for nurses and result in hundreds of hours of record keeping and tens of thousands of dollars.

Bergman said his employer, a global insurance firm, would find it easier to move to a compact state to avoid the complications of multiple licenses. “While all my licenses require the same standard of nursing education, continuing education, and background checks, the timing of renewals and processes I must adhere are different for each state,” he said. “I spend many hours per year maintaining my licenses. Additionally, my employer has spent many thousands of dollars to cover fees and my hours of work required to obtain my multiple licenses.”

The Nurse Licensure Compact, will ease nursing shortages and grant companies much more flexibility in filling open positions, helping to improve patient care. According to a recent Sun Times article, Illinois has a nursing shortage crisis with aging baby boomers needing more health care. At the same time, its roughly 185,000 registered nurses are aging – with more than half of them over age 55, and 27% of nurses planning to retire within five years.” If Illinois were to adopt the Compact, Heraty said, “It would allow elderly and disabled nurses to continue practicing in the nursing field longer and more productively through telehealth. It would also allow nurse educators to teach students in 35 states instead of just Illinois and for nurses to better respond to public health emergencies such as Covid-19.”

He added, “This compact is working well in nearly three dozen other states. There’s no reason Illinois shouldn’t participate and, in doing so, improve patient outcomes and expand nurses’ career options.” Supporters of the Nurse Licensing Compact are urged to join the petition drive to tell legislators to pass the NLC this year.