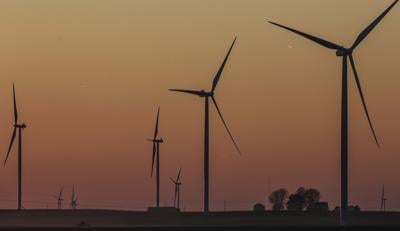 SPRINGFIELD — Lawmakers, lobbyists and energy industry officials in Springfield agree on the obvious — the future of energy generation involves moving away from dirty fossil fuels towards clean sources like wind and solar.

What’s less clear is how to get there.

About a half-dozen competing clean energy proposals have emerged over the past few months during the General Assembly’s spring session with several groups, including environmental activists, labor unions and utilities like Ameren and Commonwealth Edison backing their own plans.

There’s a growing sense of urgency as the state continues to fall short of its clean energy goals, with renewable sources accounting for about 8% of the energy generated in Illinois. This is a far cry from the goal set out in the last major energy bill, the Future Energy Jobs Act of 2016, which was 25% renewables by 2025.

Ranking of Illinois on list of largest energy-consuming states ​

Ranking on states with largest coal reserves, behind only Montana

Gov. J.B. Pritzker has also outlined a goal of being carbon-free by 2050. President Joe Biden during a global climate summit this month also announced plans to cut America’s greenhouse gas emissions in half by 2030.

Not to mention the status of Exelon’s aging fleet of six nuclear power plants in northern Illinois, which provide good-paying jobs and generate clean energy but are constantly facing closure due to market pressures.

An audit commissioned by Pritzker’s office, released last week, found that two of the plants may need a public subsidy of up to $350 million over five years in order to stay open.

Lawmakers, in a hearing Thursday, criticized the report, which was heavily redacted. Senate Energy and Public Utilities Committee chairman Michael Hastings, D-Tinley Park, called it "unprofessional and very troubling" that lawmakers were not given the full picture.

Pritzker is expected to unveil his own clean energy bill as early as next week, adding more content to an already-crowded marketplace of ideas.

Most involved with the process agree that no one proposal is likely to pass. It will instead likely be include pieces of each proposal.

Easily the most ambitious proposal is the Clean Energy Jobs Act (CEJA), the 900-page bill that sets the lofty goal of making Illinois carbon-neutral by 2030 and 100% renewable by 2050.

The goal would be to build 40 million new solar panels and 2,500 wind turbines across Illinois. The plan also calls for the electrification of the state’s transportation system.

The proposal would take a community-based approach, aiming to create clean energy sector jobs in underserved communities, especially communities of color, while also including provisions for a "just transition" in communities impacted economically by the closure of coal plants.

"This is a transition that is already underway," said Jack Darin, chapter director of the Illinois Sierra Club and a proponent of CEJA. "Coal plants have already closed across our state. We have the largest owner of coal plants in Illinois, Vistra, has announced that all their plants will be closed by 2027. So, this transition is happening but it’s not happening in a coordinated way and it’s not happening in a way that is doing anything to care for the workers of the communities that are left behind with these plants close."

A similar "Path to 100" proposal, which also aims to get the state to 100% renewable by 2050, is being backed by advocates in the renewable industry.

Another proposal that’s gained some steam is the Clean Union Jobs Act (CUJA), a labor-backed proposal that would have organized labor take the lead on building out the state’s renewable energy infrastructure.

Exelon is the parent company of Commonwealth Edison, long an influential statehouse presence. But, the company has been somewhat sidelined as it is embroiled in a bribery scheme that alleged that the utility awarded jobs and contracts to associates of a top state official — identified as former House Speaker Michael Madigan — “with intent to influence and reward” the official.

With that, any clean energy proposal is likely to include significant ethics reform measures.

Though the above proposals have received the most attention, some say they would leave downstate utility customers behind.

According to a study commissioned by utility giant Ameren, which serves 1.3 million customers in central and southern Illinois, CEJA could cost ratepayers $20 billion over  the next 30 years.

Though the downstate utility giant acknowledges that fossil fuel plants are on their way out, proposals like CEJA would significantly accelerate that process and leave downstate short of the energy it needs.

"What that would do is it would leave downstate short of the minimum amount of capacity that MISO requires us to produce within the zone," said Tucker Kennedy, a spokesman for Ameren. "So once we’re not able to meet that minimum requirement for producing it locally, then it puts in a whole new cost structure for us to go out to purchase that on the open market in other states."

The utility and downstate lawmakers point to the fact that though one state, Illinois is on two different energy grids. Northern Illinois is in the PJM grid. And, with its fleet of nuclear plants, is a net exporter of energy.

Downstate, on the other hand, is on the MISO grid and is a net importer of energy.

Ameren is pushing legislation that would allow it to build larger-scale solar facilities located near its existing infrastructure.

Kennedy said the utility has already identified 27 sites and is prepared to invest $650 million in solar projects. He said this would be much more cost-efficient than some of the smaller-scale solar proposals backed by other plans.

"So because of the sites that we can pick that are near where the interconnections are, you can get it produced much more quickly and much more cost effectively," he said.

But the proposal has been blasted by some environmental advocates, who say it’s just a giveaway to a large utility that will have the effect of crowding out others interested in entering the downstate solar market.

Hastings’ committee has held hearings on each proposal this legislative session. The suburban lawmaker has even sponsored multiple competing proposals, underscoring how a final omnibus energy bill would likely include pieces of each bill. He said working groups will convene next month to hash out a compromise.

"I don’t perceive any of these other bills in their own individual capacity passing just because various methods or various components conflict with other things, and other bills, and it doesn’t take into consideration the fact that our state is within two energy markets," Hastings said.

The 24 most unusual town names in Illinois