Posting bail to stay out of prison when charged with a crime will be a thing of the past in Illinois as of January 2023.

Gov. JB Pritzker signed the Pre-Trial Fairness Act (HB3653) into law earlier this year. It ends a pretrial detention system that punishes those who can’t pay bail and benefits the wealthy who can. But criminal justice reform advocates are expressing concerns that the risk assessment tools courts could use to justify pretrial incarceration will apply racial bias, leaving many people to face jail even without demands for bond.

“We also say they [risk assessment tools] can’t be used as a black box,” said Sharone Mitchell, director of the Illinois Justice Project and the new public defender appointed by the Cook County Board who took office April 1. “The defense council should have the ability to challenge the risk assessments and to have access to the information that is used in the risk assessments from the client just to make sure that the information is correct. Right now, I don’t think it is clinically viable to ban them.”

The legislation was initiated by the Illinois Legislative Black Caucus with support from Democrats and opposition from Republican lawmakers. State Sen. Robert Peters (D-13th) was among the bill’s sponsors and a longtime advocate of its policies.

In a criminal court case, bail is a set of terms determined by a judge that the suspect must satisfy in order to be released before trial. Under the cash bail system, the suspect must pay a sum of money to prevent imprisonment or be released from pretrial incarceration. If the suspect shows up for trial, the money is returned. Those who don’t forfeit the bond money. Defendants typically needed to come up with 10% of their bond. That could mean paying $500 for even a fairly modest bond set at $5,000.

“This piece of legislation is going to be the one of the most important pieces of legislation to come out of Illinois in decades,” said Amy Campanelli, the Cook County public defender whose term ended March 31.

She emphasized in an interview shortly before she left office that many people imprisoned for lack of bail face job, family or child custody loss and spiral downward.

The day after the bill passed, she hailed the new legislation in an email to her staff.

“Yesterday was a historic and victorious day in the Illinois General Assembly,” Campanelli wrote. “After an intense 2020 – a year filled with racial unrest, local and national protests fueled by numerous senseless killings of Black people at the hands of police and the drastic increase in our jail population – during a pandemic – we finally have something to celebrate.”

“This legislation marks a substantial step toward dismantling the systemic racism. [A system] that plagues our communities, our state and our nation and brings us closer to true safety, true fairness and true justice,” said Pritzker in a written statement.  “All of this was fueled by the experiences of those who have lived with police brutality and discrimination in this terrible year in the middle of a brutal viral pandemic that hurt Black people and brown people disproportionately.”

Nevertheless, the bill comes with much controversy. More than 112,000 people have signed a petition opposing the bill, the Chicago Sun-Times reported.

The Illinois State’s Attorneys Association put out a statement saying the bill has provisions that are “deeply problematic and will only result in further significant increases in violent crime, undermine public safety, and deny justice to crime victims.” Every county elects a state’s attorney responsible for prosecuting crimes ranging from drug offenses to murder. They request the bond amount from a judge based on the criminal charge and likelihood the accused in the case might flee.

According to a 2019 study by the American Bar Association, on any given day, as many as 500,000 people are held across the country in local jails simply because of their inability to pay bail. Often, those being held on bail have simply been accused of a low-level offense; for instance, 75% of pretrial detainees have been charged with only drug or property crimes.

The new law eliminates wealth-based detention and gives judges a more strictly defined decision-making process based on a real risk of present threat or willful flight. This will be implemented slowly under a two-year plan and will not go fully into effect until January 2023, while other parts of the law will go into effect as early as July.

The new system “increases accountability and transparency in law enforcement, modernizes our bail and sentencing systems, and provides for greater protections and more humane treatment of those who have been arrested and accused of crime,” said state Sen. Elgie R. Sims Jr., (D-17th District) a co-sponsor of the bill.

Opposition from a coalition of law enforcement groups and police unions argues that the legislation ties the hands of police officers in pursuit of suspects “and allows criminals to run free.” In addition, the Illinois Association of Chiefs of Police released a statement calling it an “anti-police bill” and that the bill “unfairly targets officers and attempts to punish them, not just make them accountable.”

“They’re [Black Caucus was] very strategic that everything in here [Pre-Trial Fairness Act] had an equity purpose, to affect what we know – that Black and brown people are disproportionately arrested, searched, brought into the system, then held in the system. This is one of the most important racial equity bills ever, in the whole country,” Campanelli said.

COVID-19 gave new meaning and momentum to the legislation to eliminate bail, according to Campanelli.  Cook County Jail still struggles with COVID-19 raging in the background. Last spring, The Chicago Sun-Times reported that Cook County Jail was one of the nation’s largest COVID-19 hotspots. America’s mass incarceration policies are being felt by correctional systems as the spread of the deadly COVID-19 virus overwhelms crowded jails and prisons, especially affecting people of color who make up a majority of the detainee population.

COVID-19 has given more urgency to reducing the jail and prison population, whether it be by freeing nonviolent offenders or elderly inmates who no longer pose a public safety threat; using home detention more frequently or setting more people free on their own recognizance, while awaiting trial or on reasonable cash bail amounts.

Data from researchers at Johns Hopkins Bloomberg School of Public Health found that the number of U.S. prison residents who tested positive for COVID-19 was 5.5 times higher than the general U.S. population. After adjusting for age and sex, the death rate would be three times higher for prisoners.

The Cook County Sheriff’s Office releases data from the jail on a daily basis. Below is data based on the Department of Corrections COVID-19 cases. 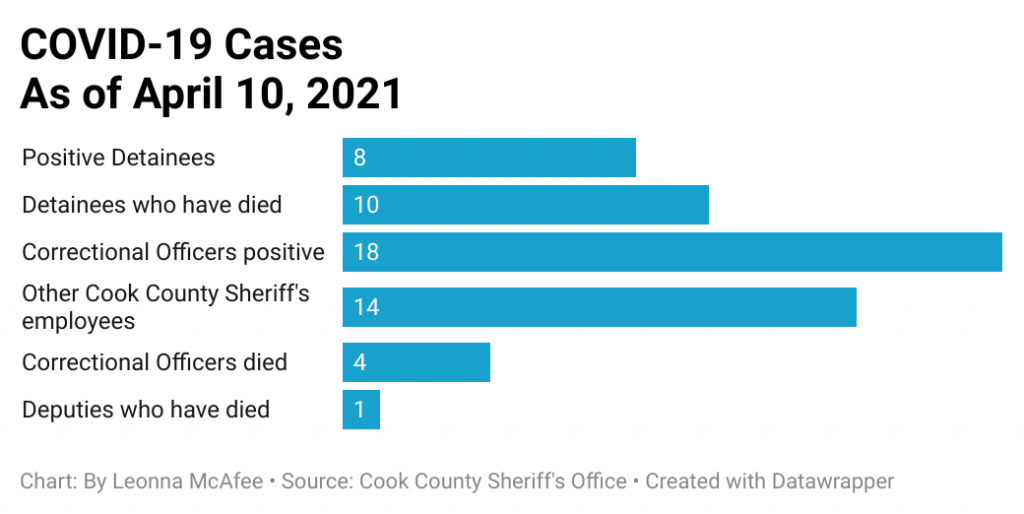 The Cook County Sheriff’s Office reported that 10 inmates have been reported to have died after contracting the coronavirus. Jeffrey Pendleton, 59, is the first known person to have died after contracting COVID-19 in the Cook County Jail. For lack of bond, he remained in jail for almost two years while presumed innocent, awaiting trial on gun and drug charges which he had not been convicted. If he had been able to pay $5,000 in bail, he could have gone home anytime during those two years.

Pendleton’s story resembles the story of another man, Nickolas Lee, 42, who died on April 12, 2020, after being incarcerated for over three years on a gun possession charge because he couldn’t post bail. He was the third detainee to die after contracting COVID-19 in Cook County Jail.

“I called [the sheriff’s office] over 132 times to get him help before he even had symptoms, [trying] to lower bail, and no one helped me,” said Cassandra Greer-Lee, Lee’s wife. “ I’m going to get justice.”

Greer-Lee is now calling for Cook County Sheriff Tom Dart to be replaced and said she has joined the campaign of Dart’s opponent. Greer-Lee declined to identify the person who hasn’t announced his campaign as yet. Last year, in an interview with WTTW, Dart said reporting of his handling of COVID-19 precautions was “inaccurate and irresponsible.” Dart also released a statement mentioning Lee’s past criminal history, which Greer-Lee said has nothing to do with why her husband died.

With the elimination of the cash bail system, people are concerned about what will take its place. Algorithmic prediction is gaining popularity in Illinois and around the country. Known as “risk assessment tools,” the prediction mechanisms crunch hundreds of thousands of case statistics on prior defendants to generate data models developed to predict whether an accused person might commit another crime and be arrested or skip hearings.

An algorithm produces a “risk” score and on that basis recommends that an accused person be released before trial — with or without an electronic monitor — or detained. The algorithms are profiling tools for the 21st century: They process prior arrest histories, convictions, and missed court dates. About 1 in 6 Illinois counties use these tools already. Cook County uses the Public Safety Assessment-Court (PSA-Court) tool.

Some reform advocates fear that these tools will worsen anti-Black discrimination and increase bias. Kimberly Foxx, the first Black woman to lead the Cook County State’s Attorney Office, said the tools need to be continually monitored for bias, but evidence has shown its effectiveness.

“We’ve been fortunate in Cook County where we’ve been using risk-assessment tools over the last four years so we can examine where the weaknesses of the tools are, are there biases that have been built into it,” Foxx said in an interview with Medill Reports.

“The success that we’ve seen around bail, we’ve had over a 45% reduction in the jail population from 2015 to now,” she said. “I make the promise that the risk assessment tool that we’re using now is effective, but we will continue to evaluate it and hopefully when 2023 rolls around, we will have a statewide tool that people will have confidence in.”

“We know that the criminal justice system is incredibly racist,” Mitchell said. “The number of times you are arrested is very much determined by where you live and what your skin color is.”

“What we’ve done with the Pre-Trial Fairness Act is that we don’t mandate risk assessments and we put limitations,” Mitchell said, describing one of the key accomplishments of the bill. “First we say that risk assessments cannot be used as a sole factor for determining whether somebody should be in or out [of jail].”