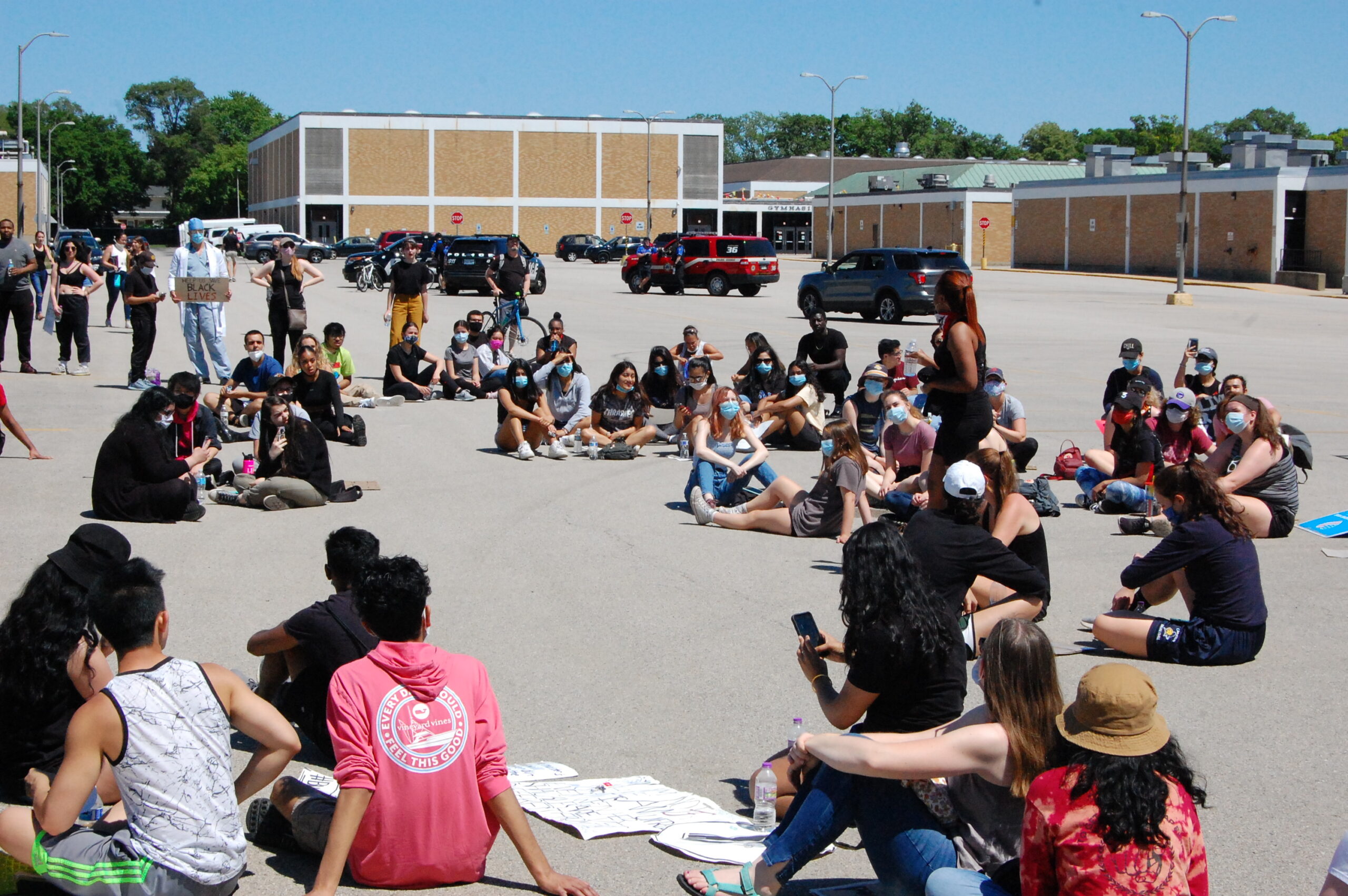 The banners hanging at Maine East and Maine West high schools express support for religious freedom and for black, undocumented and LBGT students with phrases such as “Black Lives Matter,” “No Human is Illegal” and “Love is Love.” After the banner first went up at Maine East last August, Maine Township Republican Committeewoman Char Foss-Eggemann argued that the “Black Lives Matter” in particular was a political message and that public bodies shouldn’t use tax revenue to display political messages. At the time, district Supt. Ken Wallace defended the banner, saying that it was meant to express support for African-American students rather than any political movement.

Since then, a similar banner went up at Maine West, while Maine South made plans to put up a more general “Hawks Fight Hate Together” banner. During Monday’s (April 5) Dist. 207 Board of Education meeting, commenters argued that a banner like the one at other schools would send a stronger message. Wallace argued that it wasn’t necessary, since the district’s actions to address prejudices and inequities in all of its schools made far more impact.

According to Brett Clark, the district’s director of communications, the Maine South banner was designed by Maine South students and will be displayed above school entrances. He said that Maine South Principal Ben Collins has been talking with students about putting up similar messages inside the building, but no final decisions have been made about what those messages will be and where they would be placed as of the Journal’s print deadline this week.

In mid-March, Maine South junior Eden Wening launched a Change.org petition urging her school to add a sign similar to the signs at the other schools, arguing that it would send a stronger message.

“I believe that having the sign that the district bought on our building would show solidarity with the other schools, as well as reflect the values of the students at Maine South,” she wrote. “The fact the other schools have the signs on their buildings but we do not showcases the division, racism, classism, sexism, homophobia, etc. [sic] that we allow to exist within our community.”

The petition had 1,015 signatures of Tuesday morning.

As it has been the case since the board of education meetings went virtual at the start of the pandemic, residents didn’t make the public comments directly. Rather, they had to submit comments in writing, which were then read out during their meeting.

In their statement, Eden Wening and her sister, Lily Wening, stated that they had discussions with Wallace and Collins, and the superintendent “was concerned about hanging up the banner at Maine South” because “he worried that it would create division in our community.” But the sisters argued that the fact that there is a controversy in the first place suggests that there is already a divide between those who have bigoted attitudes and those who don’t.

“For Maine South not to put up a sign that Maine East and Maine West have is communicating that our school doesn’t support the message of inclusivity and acceptance that the other two schools are portraying,” the Wenings wrote. “In addition, it is reinforcing to anyone who’s experienced racism, homophobia, sexism or any other type of oppression that Maine South doesn’t value them.”

Claire Shaffer, who signed the petition, stated that having experienced homophobia as a student, the “Hawks Together” banner was “like a slap in the face.”

“It’s so meaningless that I’d rather have no banner than that one,” she wrote, adding that, in her experiences, slurs are “commonplace and thrown around by nearly everyone at our school.”

Anita Rifkin, the member of Maine South’s very first graduating class, the Class of 1965, wrote that “racial and economic divisions in District 207 has been allowed to fester,” and the banner argument is just the latest symptom of it.

“What message do we send to young people if adults don’t stand up for the principles of justice [expressed] in this banner?” she wrote.

Several commenters said that they believed that most Maine Township residents were good people — which made it all the more important to stand up against “the minority with racist, homophobic and repressive attitudes.”

Wallace argued that “it isn’t the banner that matters — it’s the actions of the people inside the building.”

“To that extent, over the last 2-3 years, we’ve made more concerted efforts, tangible efforts in our buildings to be more inclusive,” he said. “We got Students Organized Against Racism clubs in each of our buildings, we got equity teams in each of our buildings, and we’ve committed to our work in equity and changing the behavior within the buildings. In addition, we have legal requirements as it relates to bullying and discrimination. So we’ve taken significant steps that go well beyond the banner and are actually more meaningful.”

Collins agreed with the sentiment while adding that there was always room to do better.