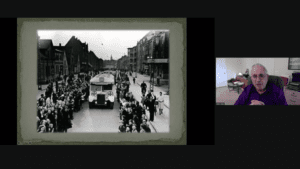 Buses from Sweden bring survivors back to Denmark in 1945.

On Oct. 2, 1943, eight-year-old Steen Metz and his family were taken from their home in Odense Denmark by a group of Nazi officers and put on a train for the Theresiennstadt Ghetto.

After suffering through 18 months of atrocities including the loss of his father, terrible living conditions, and malnutrition, Metz and the other prisoners were liberated. Seventy-eight years later, he shared his story with students of Palatine High School.

During the hour-long, virtual presentation, he recalled his experiences from the beginning of the occupation of Denmark in April 1941 through his family’s arrest and internment, and finally the liberation and return to Denmark. He told students about the fact that he was one of 1,200 children who survived Theresiennstadt, out of 15,000.

He further explained how after families started receiving relief packages, the guards would steal food and clothing and replace them with stones before distributing them. He told the students that, had he not been with his mother in the camp, he likely would not have survived. He said that after all he experiences, he learned to never give up hope, and to appreciate every day of his life.

Palatine High School junior Tommy Mikhelzon has studied the Holocaust and was pleased to hear Metz talk about his experiences.

“This has provided a lot of evidence to a lot of things I had learned before,” Mikhelzon said. “It was interesting to hear things from a different country’s perspective.”

“I have spoken with other survivors before today,” he said. “It’s great to hear another perspective.”

“He has an amazing positivity that is so powerful,” she said. “Having his mother with him showed the importance of keeping someone close to help deal with a lot of things.”

At the end of his presentation, the 85-year-old Metz made one request of the students.

“You will be the last generation to hear from survivors,” he told the students. “Be my ambassadors. Share what you heard today.”

To learn more about Metz and his experiences visit steenmetzneverforget.com.