Hastings announces for Secretary of State

A decorated U.S. Army combat veteran and champion of Illinois working families, Mike believes the Secretary of State’s office can be a catalyst for getting Illinois back on track while continuing to provide first-class services to Illinois drivers, business owners, and others.

Hastings’ announcement coincided with an endorsement from the Chicago Regional Council of Carpenters, who represent more than 30,000 working Illinois families. And with more than $500,000 already raised for his campaign, Hastings will have the resources needed to tell his story about fighting for working and middle-class families.

“Senator Hastings has always been a staunch advocate for the labor movement and a strong proponent of policies that lift the middle class,” said Gary Perinar, Executive Secretary-Treasurer of the Chicago Regional Council of Carpenters. 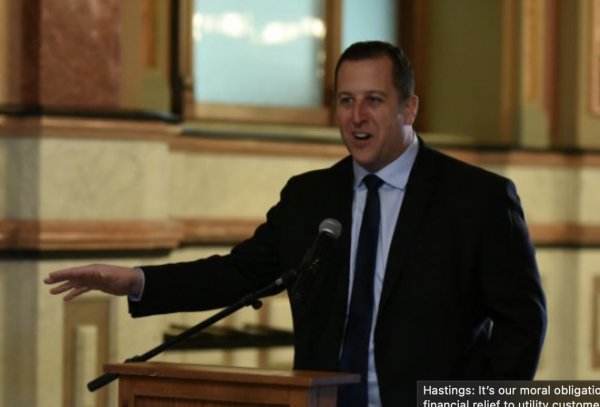 “Mike’s decision to run for Secretary of State is a boon to working families and a win for voters who expect candidates to be honest, level-headed and hard-working. His background, experience, legislative record, and work ethic give me the utmost confidence that he is the right person for this job.”

Hastings, who is backed by a base of diverse grassroots support reflective of the state, said he is humbled by the support he has been receiving for his candidacy. “It has been an honor to dedicate my life to public service, representing working class families of Illinois,” Hastings said. “In the State Senate, I have put the working people of Illinois first, helping to create apprenticeship programs, implementing automatic voter registration to make it easier for everyone to vote, and fighting to get us out of this pandemic, both from a health care standpoint and an economic one.”

“We recently opened the Tinley Park Convention Center as a mass vaccination site,” Hastings continued. “I could not have been prouder to see the Illinois National Guard, my sisters and brothers in uniform, helping our neighbors get vaccinated against this virus.”

Hastings praised Jesse White as a leader who has forever left his mark through his integrity and exemplary service to our country and state. Secretary White has improved the Secretary of State’s office, leaving an undeniable legacy of success and a foundation to build upon.

Hastings wants to continue Secretary White’s progress to further modernize and streamline the Secretary of State’s office by: expanding online services, including license renewals for drivers and businesses in good standing; promoting economic development and entrepreneurship through a robust array of business services, including lower fees for starting a business; strengthening protections for Illinois voters and consumers by focusing on information security and preventing identity theft; expand organ donation awareness and prioritize greater investment in technology improvements for our libraries.

Hastings stated that leadership is essential when leading one of the state’s largest constitutional offices. “This is the most routine interface people have with state government, and it is essential they receive top-tier services.”

Mike grew up in a middle-class family in the southwest suburbs. He earned All-State honors as a football player and went on to play at the United States Military Academy at West Point.

He will also draw from his experience as an officer in Iraq, where he was awarded a Bronze Star Medal for meritorious service in a combat zone. Hastings routinely conducted operations across a dangerous stretch of road known during the war as the “Highway of Death.” Hastings stated that keeping Illinois’s highways safe would be personal for him.

In addition to ten years of service in the U.S. Army, Mike has served in the Illinois Senate since 2013. He lives in Frankfort with his wife, Katie, and their two children, Mikey (5) and Maddie (1).

Today, I announced my candidacy to be the next Secretary of State.

For the past 22 years, the State of Illinois has been blessed to have Jesse White as our Secretary of State. His legacy will forever be one of integrity and exemplary service to our country and state. Secretary White has improved the office and provided a successful foundation that, together, we can build upon.

With Jesse’s retirement, I believe experience and energetic leadership can continue to modernize and improve the office for decades to come. My leadership experience — whether it’s in the military, corporate America or in the Illinois General Assembly — is proven leadership … and my commitment to your family and you is that I will always work relentlessly for working-class families across Illinois.

Throughout the course of this campaign, I will be discussing my ideas for process improvements and programs that will modernize and streamline the Secretary of State’s office, including:

​I will make it my priority to travel across the State of Illinois to better understand what matters most to you, and how I can make your experience with government better.

Please reach out to our campaign as your input and feedback are invaluable to me.  I look forward to seeing you soon! Stay safe and healthy.

Find him on MeWe.com and on Idobbonate.com the alternatives to Facebook