The Illinois Attorney General says Sangamon County’s chief judge, who insinuated Gov. JB Pritzker was “judge shopping,” had overstepped his authority when he refused to allow Pritzker to transfer to a Springfield judge a lawsuit which challenged Pritzker’s orders that had shut down most high school sports across the state in the name of fighting COVID-19.

On Jan. 29, Attorney General Kwame Raoul, on behalf of Pritzker, filed a motion with the Illinois Supreme Court, seeking an order from the state’s highest court, forcing the Seventh Circuit Court, based in Springfield and Sangamon County, to accept transfer of the lawsuit that originated in LaSalle County, and combine the high school sports lawsuit with a number of other legal actions challenging Pritzker’s authority to govern through the use of executive orders amid the continuing pandemic. 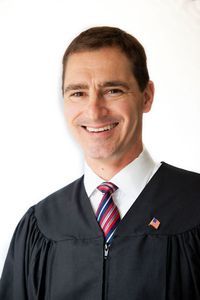 In that order, Madonia stated he believed Pritzker’s bid to transfer the case to Sangamon County and consolidate it with other cases dealing with his COVID-related orders, was “a not-so-veiled disguise to shop for a friendly forum to decide another COVID dispute involving State of Illinois activity restrictions…”

That order, in turn, had followed a LaSalle County judge’s order, granting Pritzker his requested transfer of the case from the north central county to Springfield. The judge had agreed with Pritzker’s argument that the court in the state’s capitol city was a more convenient forum for most involved in the litigation.

The lawsuit has been in court since late December, when attorney Laura Grochocki, of Chicago, filed the action on behalf of a group of parents who claim their children have suffered under Pritzker’s COVID-related orders forbidding most high school sports from being played in the fall and winter of 2020-21.

One of the parents, identified as Lisa M. Moore, of Grundy County, asserts in the lawsuit her son, a track and field athlete, who was class president, a drum major, captain of the cross country team, and was involved in numerous other functions at Seneca High School in LaSalle County, committed suicide in October, after Pritzker ordered high school sports shut down last fall.

The lawsuit blamed the suicide on the governor and his restrictions.

Other parents claimed in the lawsuit that their children had lapsed into depression, developed anger issues, and refused to leave their houses, as a result of the mental effects they suffered following the governor’s shutdown orders. They also claim the shutdown orders have cost students the opportunity to secure college athletic scholarships.

By signing up you agree to receive email newsletters or alerts from Cook County Record. You can unsubscribe at any time. Protected by Google ReCAPTCHA.

In the lawsuit, they argue Pritzker violated the rights of equal protection for Illinois high school athletes by shutting down high school sports, in the name of fighting the spread of COVID-19, while allowing college athletics and professional sports to play, albeit before empty stadiums.

They are seeking a court order requiring Pritzker to lift COVID-related restrictions on high school sports to address those concerns over the student athletes’ constitutional rights.

Soon after the lawsuit was filed, Pritzker and Raoul asked a LaSalle County judge to transfer the case to Sangamon County. The Illinois Supreme Court had months earlier ordered a number of cases challenging Pritzker’s powers to be transferred to Sangamon County Judge Raylene Grischow.

In the weeks since, Judge Grischow has dismissed many of the cases, citing a decision from an Illinois appeals court, which explicitly ruled Pritzker’s emergency powers to fight COVID are not limited by a 30-day time limit listed in Illinois’ Emergency Management Agency Act. That appellate decision has since been appealed to the Illinois Supreme Court.

A LaSalle County judge sided with Pritzker, agreeing the Springfield court was the better forum to hear the case. The judge found Sangamon County was the more convenient location for the state defendants and two of the three named plaintiffs.

Madonia’s order, however, prevented the case from being docketed in Sangamon County, and sought to send the case back to LaSalle County.

In response, however, Raoul and Pritzker assert it was not Madonia who had overstepped in this case.

In denying the transfer, Madonia pointed to Illinois court rules which give chief judges the discretion to decline jurisdiction in transfers decided on the basis of inconvenient forums.

In their petition to the Supreme Court, however, Raoul and Pritzker said Madonia misinterpreted that rule. They said the rule only provides that discretion for transfers into Illinois county courts from other states, not from other Illinois counties.

For cases merely transferred from one Illinois county court to another, the rule “imposes a mandatory obligation that leaves the transferee court no discretion to refuse to exercise jurisdiction over the transferred action…,” according to the governor’s motion.

“Chief Judge Madonia had no authority to interrupt the transfer,” Raoul and Pritzker wrote.

They have asked the Supreme Court to issue an order requiring the Sangamon County courts to accept the case, and consolidate it before Judge Grischow.

Grochocki said she intends to file a response to the governor’s motion, arguing in support of Madonia’s order.